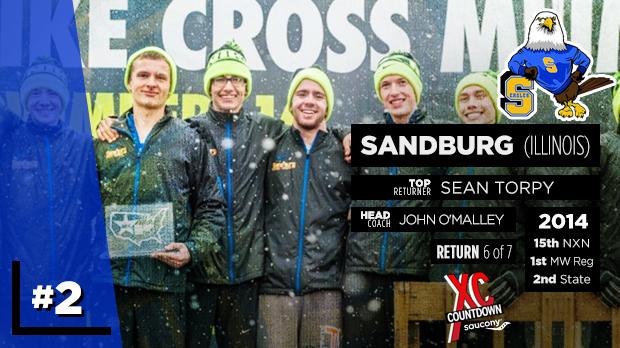 One of the greatest pack-running teams of the 2014 season is back at nearly full strength, as the Sandburg boys return six of their top seven. The squad finished 15th at NXN, but their most impressive finish last year came at the NXR-Midwest, where they had a seven-second spread through their entire top five. Yes - seven seconds! The returning scorers' personal bests indicate an 11-second top five spread and average time of 15:48.3.

The magic of Sandburg's squad is that there was no clearcut No. 1 runner. If anyone broke out over the track season, though, it was Sean Torpy. The rising senior clocked personal best times of 9:26 for 3200m and 4:09 for 1600m. The rest of the top five track runners are all under 9:40 for 3200m and 4:25 or better for 1600m, indicating good fitness that should cross over to cross country.

Just don't describe Sandburg as pack runners to head coach John O'Malley. Read the Q&A with the 12-year veteran coach below to hear why he does not believe in pack running.

MileSplit: How many years have you been coaching high school cross country (and at your current school)?

John O'Malley: 12 years, all at Sandburg.

The team had a lot of success last year placing 2nd at Illinois State Champs, winning NXN Midwest Regional, and placing 15th at NXN. What do you attribute the main reason for the success of your program last fall?

Running with a shared identity and a greater purpose. We ran for a Sandburg teacher/swim coach, Jane Caliendo, who we lost to cancer, and a teammate, Alejandro Claure, who was a good sophomore runner with a big future in the sport who more than anything just loved to run and found a tumor in his leg during the season. He lost his knee and part of his femur and will never run again but he kept his spirit and sense of gratitude so high. If you’re only running for yourself you are missing a well of accessible energy and a sense of purpose. How can you accomplish anything without a sense of purpose? Of course, the boys don’t need a tragedy to find a greater purpose for their running but last year we had a clear unified sense of purpose.

Although 2nd place was Sandburg’s best placing at XC State Champs, how did that performance fuel the boys knowing they got upset by Hinsdale Central and were not pleased with it?

We never really viewed ourselves as the favorite since we were well aware that Hinsdale was off at the sectional and resting a key guy from injury who would run in state, and we were well aware that we never ran as fast as they had even in their first race at Detweiller in early September, but we knew we had a good shot at the state title and were consequently disappointed that we didn’t step up and make the next leap to beating a team as good as Hinsdale Central. The boys have run with a great desire since then. There is a lot of fuel in dissatisfaction if you have the right character. These boys have that character. They are hungry and ready to tear out of the gate. One of the most obvious characteristics this team has both collectively and individually is that they are rarely satisfied, no matter their accomplishment. They have an unending quest for their greatest potentials - that is something that will never be satiated.

Considering the boys returns 6 of their top 7, was there a collective thought/idea/feeling the team had as they left Portland after placing 15th at NXN? If so, can you give us some insight into that post-race atmosphere last year?

The post-race atmosphere was definitely a complexity of emotion and reflection. We had been so intent on the everyday process of working hard, becoming better people and running for a greater purpose than ourselves that the post-NXN evening felt a bit like finally looking up from a lengthy task to see what we created. There was a lot to be proud of: we ran with all our heart, dedicating our racing and health to a teammate who lost his knee to cancer only a month earlier. We had improved so much from the previous year and the previous two - this was a team that lost their conference race on the F/S level only two years earlier and now had won the Nike Midwest Regional. We had won a state trophy and just experienced an amazing Nike National week. There was a lot there…but there was also something missing, and there was the feeling that we had just explored a place that we would revisit again soon. It was like a truly meaningful, soulful climb up a mountain range and reaching one of the lower peaks, taking a look at the top and saying, “let’s descend, regroup, and go for the summit.”

You've coached sub 4:00 miler Lukas Verzbikas, the only person to win individual national titles at Foot Locker and NXN. This year's team differs greatly in that there are no outliers serving as the team's low stick (correct me if you see differently). How does having such a tight pack affect the team morale and enhance their potential on the XC course?

We, paradoxically, have a bunch of outliers on this team. If you got to know David, Maximus, BLukas and Tommy, and Sean and Skuc and CTorpy, and Paulie and Lifonti and DJ and Dirty Dan and Big Lou and Foster and Danny P and on and on and on…you’d see a bunch of outliers. Those guys returning from last year’s state and NXN team are all intent on being front of the pack guys - in every meet. And I’m not sure that one of them will even be our first guy across the line. I am confident we’ll have a bunch of front running outliers.

Our pack really formed itself organically throughout the season. I am not into forming a pack for the sake of having 4-5 jerseys blending together for an impressive image. A pack is only worthwhile if its members are there pushing each other to be better, not holding each other back. If I had seen from the outside a team running with a :10 split I probably would have assumed someone was holding back for the sake of his teammates. Our team mission operates on the premise that the reason you are there for each other is not to comfort one another. In fact, it’s the exact opposite: we are there to ensure no one gets comfortable.

What does summer training look like for the Sandburg boys?

Summer training is an intense buildup of the foundation of all aspects of our key training components. They train six days a week together and we blend in all varieties of training components from all out speed to long aerobic development. The emphasis changes throughout the season.

What would be the best way to describe your style and philosophy of coaching and working with high school runners?

Empowerment. Mind and body. Their character comes first, always. We focus on being strong people first and then the strong running comes as a result.

You return 6 of your top 7 from last year’s team. Who do you anticipate will be the top seven runners for this fall’s team?

One of my least favorite terms is “JV.” We have no JV runners. We don’t ever talk about or think about “Top 7.” It’s an arbitrary number and focus. There are well over a dozen guys who are right at the front with whoever our first finisher will be. We provide more opportunities for more guys than you could imagine. With 11 varsity races a season, we have had 49 different lineups out of 55 races in the last five season. So our 7 guys are constantly rotating. But, yeah, the six guys from last year are really tough runners.

Entering last NXN you guys were the most tightly knit pack of the field coming off of an eight second spread between 1-5 from regionals. Does last year’s team and this year’s squad thrive off of being so tightly knit as a pack?

They do thrive off of racing each other. I kind of explained our pack mentality in an earlier question. Their teammates hold each other accountable mid-race, providing them with invaluable feedback in moments that otherwise can feel unmanageable.

No one who appears to be ready for varsity racing. Our freshmen will be in a year of development. In the last ten years of qualifying for state, we’ve only had two freshmen race at state.

What is the number one goal for the Sandburg squad this year?

Shedding off previously self-imposed limitations and reaching a level of excellence that’s never been reached before while running for something greater than ourselves.

What would be the biggest obstacle or challenge that would prevent your team from achieving that goal?

Leaving the moment of the process.

What would it mean for the team to win their first State title?

Outcomes are not always controllable, and I avoid imaging what it would feel like to win because it doesn’t help you, but I know it would represent a fitting culmination for a group that refused to be defeated and saw every setback as the substance of victory. We would be overjoyed.

How do you approach the state meet and post-season knowing you still want to hold onto peak performance at regionals and nationals?

It’s definitely tough with such a huge amount of time between the Illinois state meet and NXN. But honestly, how hard can it be? I mean, they aren’t battling a life threatening illness, they aren’t working through a personal tragedy, they aren’t growing up in a time of war where their number will be called after graduation…it’s running! Enjoy it! It’s my favorite part of the day. So, they just keep training and racing. It’s quite a privilege!

We don’t do captains. Every junior and senior is held to the same standards. Everyone needs to be a leader. But our senior class is a marvel of leadership. They each have different styles, some vocal, some through their actions, some very effectively behind the scenes. John Wagner, Paul Siezckowski, Sean Torpy, Chris Torpy, Tom Brennan, Max Lehnhardt, Brandon Lukas, David Gleisner, Dan Laskero, Nathan Arrigoni, Pat Foster, Lou Cavalier, Nick Carollo, Anthony Lifonti, and Kyle Stogin are several seniors who have been together through it all from junior high to now and they have each, individually, demonstrated some impressive leadership. Truly.

What are the top invitational meets that your team will be attending this season?

Lyons Invitational to start (host Lyons is in the top 5 in state every year and a great program), Peoria Notre Dame, Peoria Central Invitational

What is a favorite annual or common pre-season workout or run for your team?

Favorites? Well, I’m not the one running them so I had to ask some of the boys. I included some of their responses below

We change it up every year but a couple big hits that we do in pre-competition phase are long progression runs, threshold intervals such as 2 x 2 mile, 1 x mile with short rest, and hill circuits. The boys also love spiking up and doing all out 50 meter sprints.

What is a favorite annual or common mid-season workout for your team?

What is a favorite annual or common championship season or end-of-season workout for your team?

Mimicking goal races from start to finish on similar terrain with an all out 300 meter to close out is always a confidence builder if they get it done.

In the words of Chris Torpy, their favorite workouts are “anything hard.”