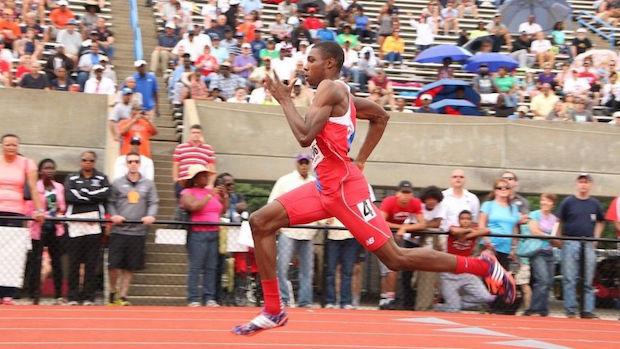 Noah Lyles of T.C. Williams, Va. ends 2015 as the nation's top sprinter. The rising senior ran onto the U.S. All-Time List this spring in the 100m (U.S. No. 4 All-Time 10.18) and 200m (U.S. No. 3 All-Time 20.18). He captured Gold in 200m and Silver in the 100m at the Pan-American Junior Athletics Championships in Edmonton, Canada last weekend to cap a season that included a 100m/200m sweep at New Balance Nationals Outdoor and USATF Junior Nationals. Learn more about the talkative star in the interview below, as he targets the USATF Olympic Trials and Usain Bolt's 19.93 World Junior Record in the 200m next year.

MileSplit: You and Reynier Mena Berenguer of Cuba traded wins in the sprints, as you won the 200m (20.27) and placed second in the 100m (10.14). Can you take us through the rounds of each race? How were you feeling after each round?

Noah: During the 100, I was really relaxed and calm. It was actually funny because the whole time we were at the track, there was a huge headwind and somehow on Friday, it decided to be a tailwind. When I was waiting for my heat, I saw the first heat go and I saw the time from far away and I was like, 'does that really say 10.09?'. So then I was like, 'ok, if the Cubans running like that, I'm about to do something better.' Then I ran 10.07 and I was so hype the rest of the day. In my mind I was saying, 'I don't care if I run a wind legal or not, 9 I am gonna run 9.' Unfortunately, I had forgot that the track was not actually that good so if I didn't have a tailwind I wasn't going to run it. But going into the finals, I was thinking, 'this is mine to win, just do what I did in the finals.' Unfortunately, Reynier had a great start and it was too much for me to come back from. But it was a great race and I ran my second fastest wind legal time.

In the 200, truthfully, when I woke up, I was not feeling it. I felt like my body was broken and I didn't really want to run. But after I started walking, went through my recovery process, and did a lot of mental work with myself, I was ready to get my revenge. For the trials for the 200, I had to wait 2 extra hours because of a lightning delay. But I still made it to the finals and after that, it's all about the finals and only the finals. When I was getting warmed up for finals, I worked on my start and getting out more powerful. Right before the race even started, when I was taking my clothes off and about to get in the blocks, I was actually talking with the basket girl. Lol it was really funny because we started about how we get nervous before races and it made me think that everyone gets nervous. When I got in the blocks, I had one thing on my mind and that was win. After I crossed the finish line I was so happy and I didn't run a PR, but still, it was a great race.

How would you evaluate your overall performance in the finals? The 200m win came a few days after a narrow second place finish in the 100m. How did you bounce back from a narrow defeat and stay positive? How the narrow defeat motivate you?

When you lose a race, you can't focus that you lost. If you do that, you will lose your next race. Like I said, I was not very motivated the morning before the 200m but I told myself that all you have to do is do what you been doing all year, rely on your training. When I left to go to the track, I was a totally different person that woke up that morning. 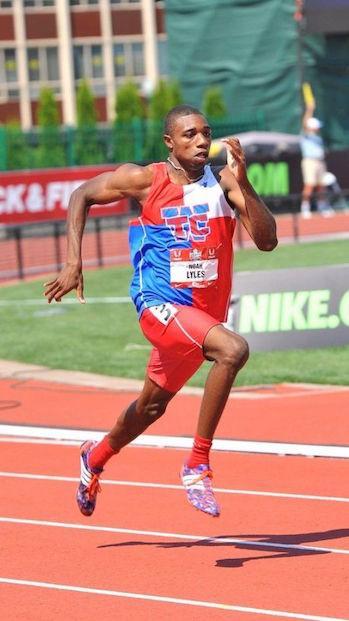 The 10.07, I will be honest, that was mostly the wind. I was definitely running fast but without the wind, I think I might have run 10.13. I wouldn't say it was mostly wind if the wind didn't literally pick me up and take me out of stride in the middle of the race lol. But I was definitely running fast with or without the wind and I don't care if that was legal or not, it is hard to run 10.07 so I'm still happy with that time.

I am so happy that I went to World Youths the past two years because it showed me the world and the stage that I would be performing at for a long part of my life. But truthfully, Pan Am Juniors was not as big as World Youth and it is not as hype at all. Like when only half the world is there, no one really cares. I was used to lots of cameras at the end of a meet and lots of reporters, but that did not happen at Pan Am Juniors. But I think that was good for me this year because I need a little bit of a break and next year is going to be crazy so a break is good every now and again.

Who was your roommate?

My roommate was KeAndre Bates, he goes to UF, we were actually on the World Youth Championship together in 2013. We are pretty good friends, we actually have a lot of common interests and views on school. We would actually stay up for almost an hour talking every night about track and manga.

What was the weather like and how would you describe the city of Edmonton? Did you do any sight seeing or cultural activities?

Edmonton was really cool but if anyone wants to know what it's like, it is the exact same as America. Sometimes I couldn't even tell the difference. We did do some sightseeing. Edmonton has the biggest mall on I think the Northern hemisphere. The mall had a water park, amusement park, every store you can think of, a hotel, Wal-Mart, and lots of other things. We didn't even see the whole mall. The weather was in the 70s the whole time, it didn't get any hotter and the wind was ridiculous. In the morning, it would be chilly and kind of cold. Me and my mom met a man who said he used to be a truck driver and he would drive on the frozen lake and put chains on the tires to drive. He also told us it would get to -30 in the winter but people would still want to run outside. So people wear special spikes on their shoes with springs in them so they won't slip on ice. Also they have to wear ski masks and cover their mouth because if they didn't, the air was so cold it would freeze their lungs and people had died from that. When me and my mom heard that, we were like, 'that's crazy.'

What did you take away from your performances? What did you do well and what do you think you can improve upon? 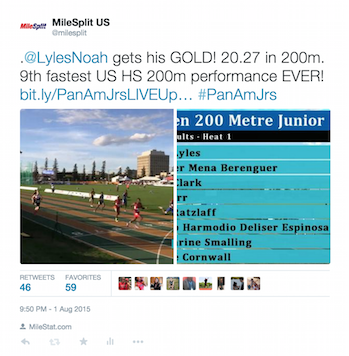 This meet, I didn't really take a lot away. If anything, I was just happy my mom could finally see me run internationally. This year we actually have a lot we will be working on, me and Josephus have a long plan that is going to take us to another level but you guys are gonna have to wait a little to see those results.

You targeted Usain Bolt's World Junior Record of 19.93 in the 200m as a big goal for the weekend. What do you think you need to do to break 20 seconds? What would that record mean to you?

Like I said in the last question, we have a whole program and plan that is going to take us to another level so I am not very worried about if I will run 19 or 9. The question is more what will the time be. But if I did run that fast, it would give me greater confidence for next year but I will break his record next year.

I was not surprised not to see Michael O'Hara because this was only half of the year and it was a meet that was kind of late. I did see that he signed with Puma and again, I was not surprised. If you are Jamaican and you are fast, you normally sign with Puma so that was not a surprise.

You have the 'A' standard for the Olympics and plan to compete in the Olympic Trials next year. Do you have ambitions of turning pro upon graduation, like O'Hara? What are your plans for the next 5 years?

The way it is looking like for going pro there is a big possibility that me and Josephus will go pro. But we also want to see how the college life is. So even if we don't go pro out of high school, it is very likely we won't stay in college for very long.

Is he still your biggest rival? Have you now added Reynier Mena Berenguer to your list?

NO Reynier Mena will not be added to the list. I have already beaten him so there is no reason to add him. Michael O'Hara is not my biggest rival anymore, I have decided to clear the list because next year the list will be filled with pros. 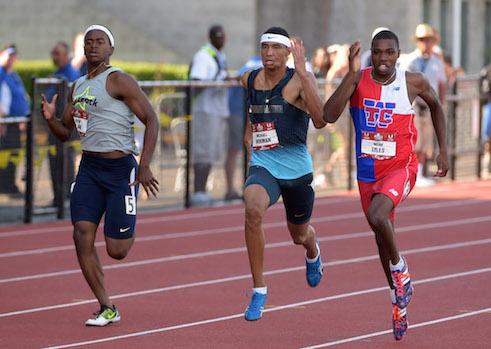 When does school start again and how will you spend the rest of your summer? You told me that you have taken 3 week 'off' periods during the season. Now that your season is over, how long will you take 'off' and when will you start training again?

I always take from whenever my season ends to November because that's when the indoor season starts. But in the time between that, we will be doing other things like yoga, strength programs and stuff like that.

I am actually going to watch the AAU Jr. Olympics to watch my girl friend (Brandeé Johnson) run the (4x400m relay). I'm going on a cruise at the end of summer to the Bahamas. I have always wanted to go on one so I'm really happy for this cruise. Truthfully, I normally don't eat junk food so my diet doesn't really change. The only thing that might change is how many milkshakes I drink.

Overall, my Jr. year was great. My original goals were to only run 10.2 and 20.2 but I ended up running 10.07 and 20.18 slowing down. I passed the school year with great grades and the college recruiting plan worked really well and if I had time to talk about that, I would love to. So overall, this was a great Jr year.