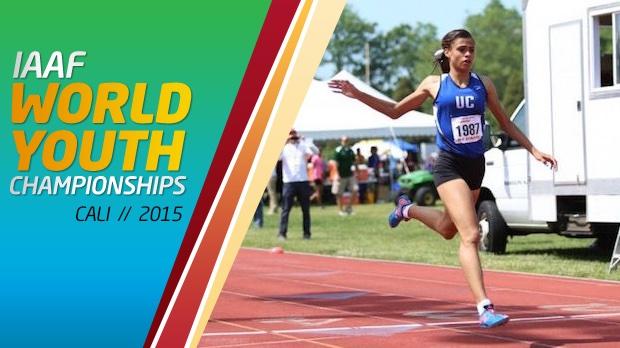 Sydney McLaughlin of Union Catholic, N.J. ranks No. 1 in the 400m hurdles with her World Youth leading time of 55.28, which is just eight hundredths of a second off the National High School record.

Ninth in a Series - Compiled by Mike Kennedy (e-mail mkentrk@aol.com )

We’ve Come Along Way: The U.S. team for the first World Cup Championships in 1999 was limited to athletes who had attended the1998 USATF National Junior Olympic championships and that resulted in a sixth place finish and just four gold medals. Over the next four World Youth Championships, the selection pool was extended to the USATF National Youth Championships and the Junior championships. As a result, the U.S. won four straight team championships and improved its total points from 119 to 146 but the rest of the world was closing the margin. In 2009, for the first time, the U.S. held a qualifying meet and that resulted in a jump of more that 20 points in team scoring and stretched it’s team championship winning streak to seven. Beginning in 2009, a general bench mark for making the team was a performance or performances that showed an ability to reach a WYC final. In 2015, for a number of reasons that general benchmark was extended to a very few athletes who, by performance, showed they were close to making a final. Whether that policy continues in 2017 remains to be seen. Much could depend on how well those who fell just short of the benchmark of making a WYC final perform.

Prospects For 2015: This U.S. team is strong and should extend its team championship streak to eight. As mentioned before, the rest of the world continues to improve at an increasing rate and it remains to be seen if the team score of 167 points in 2008 can be topped. After 2013, it was clear the difference between the U.S. and the second place teams continues to decrease. A second change was the fact that the U.S. had an all-time low of just two gold medals. However, that could well have just been an anomaly and the U.S. will return to winning six or seven gold medals. In looking at the entrants for the 2015 WYC, it is very clear that in an increasing number of events the competition for gold medals is much closer than in the past. That trend is even more evident when you look at the battle for medals. The primary reason for this is an increase in the number of the top Youth athletes who are choosing to compete at the Junior and Senior level and by-pass the WYC. This was particularly clear this year in the girls’ pole vault.

U.S. Individual Prospects: The best hope for the girls to win gold medals rests with Sydney McLaughlin in the 400 hurdles, Alexis Duncan in the 100 hurdles and Candace Hill in the sprints. The U.S. could also mine gold in the 400, 800, pole vault and shot put. The boys' best chance for gold will come from Norman Grimes in the 110 hurdles and 400 hurdles and Isaiah Lucas in the 110 hurdles. However, there are a number of events where the U.S. should be in tight competition including the 400, high jump and shot put. It is also hard to see a mixed 4 x 400 relay made up of Symone Mason, Keshun Reed, Sydney McLaughlin and Josephus Lyles losing.

What follows are two charts showing the history of medals won and team scoring for the WYC and a look at all of the individual events.