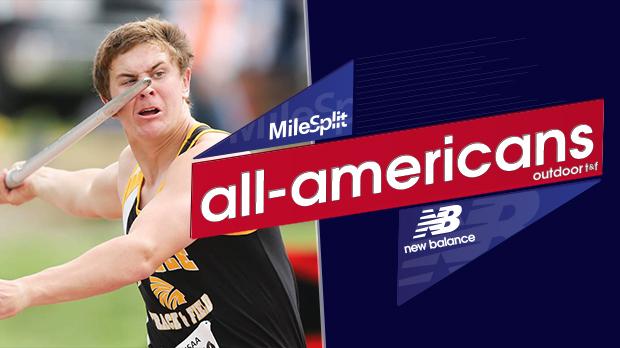 1. Jeff Ast ( Andale, KS- Sr.) -The throws specialist is undefeated in the javelin this year, including a sweep of the Kansas Relays and Kansas State Championship for his first state crown. He won the Andale Invitational in U.S. No. 1 226-2 to set a new Kansas state record.

2. Michael Biddle ( Williamsburg Community, PA - Sr.) -The New Balance Nationals Outdoor champion won his debut at the Greensboro championship. He won the Pennsylvania state meet and finished runner-up at The Penn Relays. He ranks U.S. No. 3 with a best of 213-10.

3. Liam Christensen (Academic Magnet, SC - So.) - The sophomore has the second farthest throw in the country of 224-4 which he threw just last weekend at the USATF World Youth Trials. Earlier in the season Christensen placed first at USATF S.C Junior Olympics throwing 194-10, he also placed 5th at the New Balance Outdoor Nationals meet. Christensen will continue his season representing team USA at the World Youth Championships in Colombia later this month.

4. Hudson Keffer ( Central Kitsap, WA - Sr.) - Keffer was undefeated all year in the javelin except for his fifth place finish amongst college freshman at the USATF Junior Championships (192-10). The Washington State Champ threw his best throw of the year U.S. No. 4, 210-0 at the Capital Triangular meet early in the season.

5. Mike Marsack ( Stroudsburg, PA - Jr.) -The juniors best throw of the season was at his district meet where he threw 201-11. Marsack rounded out his season as runner up at New Balance Outdoor Nationals with a throw of 200-11.

6. Grayson Hill ( North East, PA - Jr.) - After finishing fifth at the Pennsylvania State Meet (186-6) the junior continued to have an impressive postseason. He finished first at the Caribbean Scholastic Invitational with a throw of 179-11, and went on to take third at the USATF World Youth Trials throwing 193-11.

7.Ryan Gebhardt ( Wallkill Valley, NJ - Sr.) -The senior won the New Jersey State Championship throwing 189-1 and then came back the next weekend to throw a U.S. No. 6, 206-6 to win the NJSIAA State Meet Of Champions