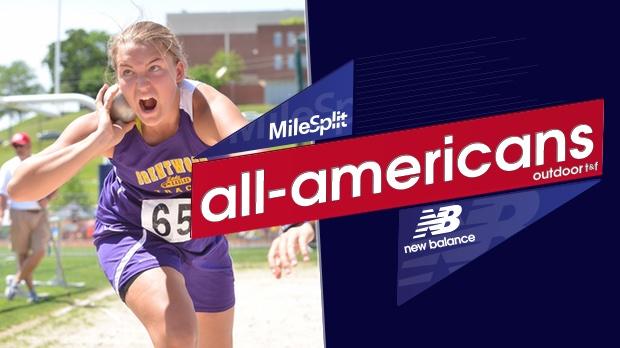 Sophia Rivera had a dominant year in the shot put, going undefeated against high school competition.

1. Sophia Rivera (Brentwood, MO - Jr.)- Rivera leads the country in the Shot put with her throw of 53-5.75 which she threw at the USATF Junior Championship meet. The senior has had an impressive throwing career having won six state titles in throwing events, along with several national caliber wins. This year alone she has been undefeated in the shot put against high school competitors winning several big meets including Kansas Relays (47-3.5), Great Southwest Classic (51-1.75), Caribbean Scholastic Invitational (48-2.75) and NBNO (53-1).

2. Elena Bruckner (Valley Christian, CA - Jr.) - Bruckner has gone undefeated all year including big wins at Arcadia Invitational (48-5), and the California State Meet (49-11.5). Her best throw of the season which is a U.S. # 2 mark of 53-5.5 was thrown at the CIF Central Coast Section Finals.

3. Nickolette Dunbar (Whippany Park, NJ - Jr.)- The Junior was undefeated all season except for her single loss at NBNO where she took runner up to Sophia Rivera, throwing 50-5. The New Jersey State Champion also won the Penn Relays championship with a throw of 50-7.75 Her throw to win the New Jersey State Meet ranks U.S. # 3.

4. Kathleen Young (Warrensburg-Latham, IL - So.) - Young captured her second consecutive Illinois state title this year with her 43-11 throw. She went on to finish second at the Great Southwest Classic and sixth at New Balance Nationals Outdoors. She is the U.S. No. 4 thrower on the year with her PR of 50-10.

5. Alyssa Wilson (Donovan Catholic, NJ - So.) - Wilson had an impressive sophomore season placing top three in every meet this outdoor season. She capped off her season finishing third at NBNO (48-2) just behind Rivera, and fellow New Jerseyan Nickolette Dunbar (50-5). Her best throw of the season was at the New Jersey State Meet where she placed second throwing a U.S # 5 (49-7.75).

6. Courtney McCarthney (Selinsgrove, PA - Sr.) - McCarthney captured her third consecutive PIAA state title in the shot put. She threw the U.S. No. 6 mark with her throw of 49-5.75 her district championships.

7. Edith Svonavec (Garfield, OH - Sr.) - The defending Ohio state champ took her second consecutive OHSAA title this year. She finished tenth at New Balance Nationals Outdoors and finished the year off at U.S. No. 7 with her PR throw of 49 feet.

8. Nia Britt (Notre Dame, CA - So.) - The California state runner up took the victory at the Arcadia Invitational, second at the Mt. Sac Relays, and finished off the year ranked U.S. No. 8 with her 48-10.75 mark from the CIF state meet.