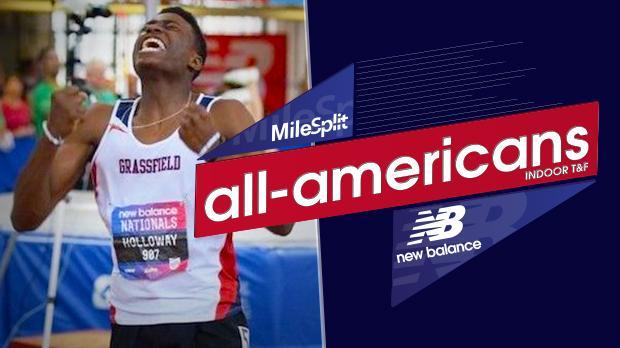 Grant Holloway can hurdle, sprint, and jump as he popped a U.S. No. 1 in the long jump with his jump of 25-8.75 at the Virginia 6A State Championships.

2. Ja’Mari Ward (Cahokia High Schol, IL -Jr.) - The indoor national champion did not have the chance to defend his NBN title due to injury, but still finished the year ranked U.S. No. 2 with his 25-6.5 best. He won the Illinois state meet, the Great Southwest Classic and third at the Caribbean Scholastic Invite behind two Cuban athletes. He is undefeated versus Americans this year.

3. Lawrence Wallace (Tucson Magnet HS, AZ - Sr.) - The Alabama recruit enjoyed an undefeated season in 2015, including a clean sweep through Arizona to win his first state title with a wind-legal U.S. No. 3 mark of 25-1.75.

4. Chris McBride (Redan, GA - Sr.) - The former sprinter chose to focus solely on the jumps this season. The choice was a good one as he went undefeated in 2015, including victories at the Georgia Olympics and NBNO. He jumped All-Conditions US #7 25-1.25 to win the national title.

6. Justes Nance ( Blair Academy, NJ - So.) - The New Balance Nationals Outdoor runner-up ranks U.S No. 7 with his 24-5.75 jump in Greensboro. He won the New Jersey state championship as well as the USATF World Youth Trials.

8. Mark Rubalcaba ( Faith Lutheran HS, NV - Sr.) - The Nevada state champion for long and triple jumps was nearly undefeated in the long jump this year, as he also won the Arcadia Invitational. He ranks U.S No. 6 with his state title-winning jump of 24-8.