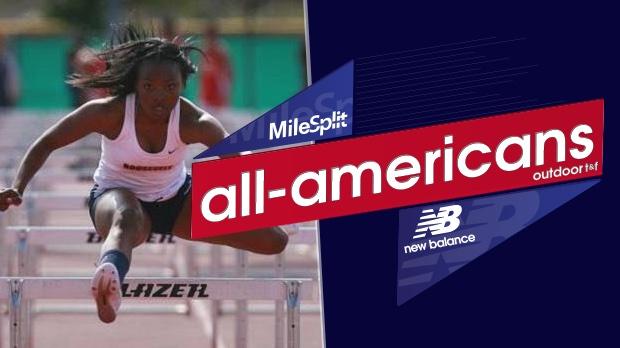 Jasmyne Graham capped off her undefeated season with victories at the CIF State meet and Brooks PR.

1. Jasmyne Graham (Eleanor Roosevelt, CA - Sr.) - Graham bettered her second place finish from the California state meet last year, winning with her U.S. No. 1 time of 13.17. She went undefeated in the 100 hurdles this year and went on to take the victory at Brooks PR where she ran 13.36. Graham also won at the Arcadia Invitational and Mt. Sac Relays.

2. Anna Cockrell (Providence Day, NC - Jr.) - Cockrell captured her third consecutive North Carolina state title in the 100 hurdles. She also took third at New Balance Nationals Outdoors and the USATF Jr National Championships. At the Caribbean Scholastic Invitational in Cuba, Cockrell took home the victory while representing the U.S. She finished the season off as U.S. No. 4 in the 100 hurdles.

3. Mecca McGlaston (Dublin, CA - Jr.) - McGlaston finished second at the California state meet where she ran the U.S. No. 2 time of 13.18. She also went on to finish fourth at Brooks PR in the 100 hurdles.

4. Alexis Duncan (Desoto, TX - Jr.) - The defending Texas state champion captured her second UIL state title this year. Duncan went on to finish fourth at New Balance Nationals Outdoor. At the World Youth Trials, Duncan ran the U.S. No. 3 time of 13.24 in the Prelims and went on to take first in the finals to earn herself the chance to represent the U.S. at the World Youth Championship.

5. Funlayo Oluwole (Western Branch, VA - Sr.) - Oluwole defended her Virginia state title in the 100 hurdles where she ran the U.S. No. 5 time of 13.38. She went on to finish fifth at New Balance Nationals Outdoors.

6. Tonea Marshall (Arlington Seguin, TX - Jr.) - Marshall captured the Texas state title in the 100 hurdles, bettering her second place finish from last year. Early in her season she took the victory at the Texas Relays. Marshall also took second place at New Balance Nationals Outdoor where she clocked the U.S. No. 6 time of 13.12 to finish second. She also finished third at the World Youth Trials.

7. Reonna Collier (Vacaville, CA - So.) - Collier took first at the Golden West Invitational and went on to finish second at Brooks PR where she ran the U.S. No. 8 time of 13.47.

8. Tia Jones (GA - 8th) - Jones, only an eighth grader, mixed it up with some of the top high school girls in the nation this year. She took first at the AAU District Qualifier meet in Georgia. At New Balance Nationals Outdoor she won the Championship Girls 100 hurdles race with her time of 13.08.