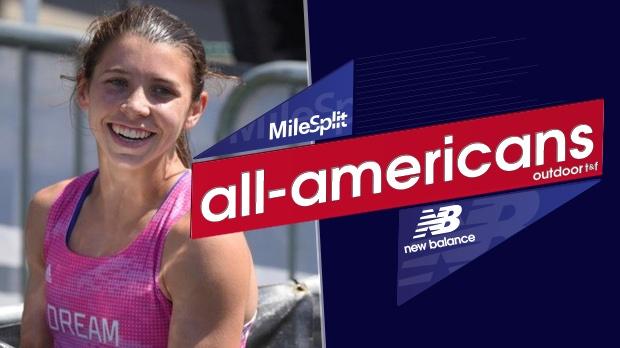 Christina Aragon of Billings, MT ends the year with the fastest mile time of 4:37.91 in winning the adidas Dream Mile.

1. Christina Aragon (Billings, MT - Jr.) - The nine-time Montana state champion won the Stanford Invitational and ran an eye-opening U.S. No. 5 All-Time 4:16.36 at the Payton Jordan Cardinal Invitational amongst collegiate runners. She placed just third in her first major national meet, the Prefontaine Classic, but won the adidas Dream Mile in U.S. No. 1 4:37.91.

2. Ryen Frazier (Ravenscroft, NC - Sr.) - The NC State signee finishes the year ranked No. 2 behind Aragon on the leaderboard, whom she finished behind as runner-up at the adidas Dream Mile in 4:38.59. Frazier capped an outstanding senior season with wins at the Prefontaine Classic and a sweep of the distance events (Mile/2 Mile/5k) at New Balance Nationals Outdoor.

4. Amanda Gehrich (Tesoro, CA - Jr.) - The California state champion showed off an impressive kick to win her first state title over pre-race favorite Destiny Collins. She went on to placed third at the adidas Dream Mile behind Aragon (#1) and Frazier (#2). Her state-winning 1600m time of 4:39.33 is the U.S. No. 1 mark in the event in 2015.

8. Katie Rainsberger (Air Academy, CO - Jr.) - Though Rainsberger ran 4:40 as a sophomore last year, she was late to run those times again in 2015 due to issues with anemia. She ended her season on a strong note, picking up a triple at the Colorado state meet (800m/1600m/3200m), placing fourth at the adidas Dream Mile and runner-up at Brooks PR.