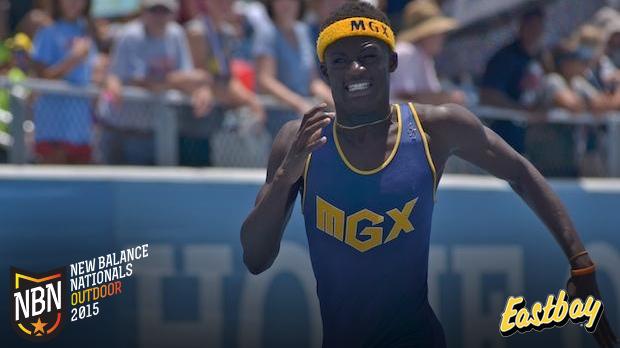 Although the best time in the field of 46.40 was clocked by Izaiah Brown at the New York State Meet this past weekend, Brown is going to see some tough competition! The senior has some wheels as he won the 400m at the New York State Championship this past weekend and took second in the 200m dash with a time of 21.10. He was the runner up at New Balance National Indoor meet this past winter where he finished just behind Ria Benjamin.

Brown's competition will come from a stacked field of guys including Virginia state Champ Josephus Lyles and eighth grader Tyrese Cooper from Miami, Florida. Lyles finished first in the event last year at NBNO, but took third at New Balance Indoor Nationals this winter, finishing just three tenths of a second behind Brown.

It's crazy to think an eighth grader could be in the mix to win in a field mostly filed with juniors and seniors, but this kid is just that fast! Cooper has clocked some crazy fast times that would rank among the best high schoolers in the country - running a 10.51 100m, 21.19 200m and 47.13 400m. With his 400m time of 47.13, he took second in a field of high schoolers at the Golden South Classic.

MileSplit will be on-site with coverage at the 2015 New Balance Nationals for all three days (June 19-21) from Greensboro, North Carolina!