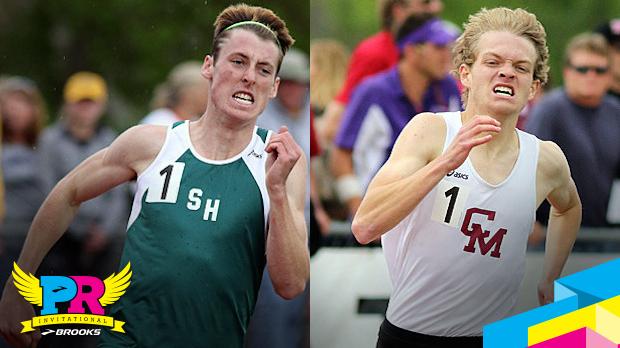 In our latest Brooks PR Match-Up, we breakdown the PR's and head to head outcomes between the two Colorado state 800 meter record breakers in Blake Yount of Smoky Hill High School and William Mayhew of Cheyenne Mountain High School.

Both had a historic Colorado state meet last month starting with Mayhew breaking Yount's two week old Colorado soil state record in the 800 meter run with 1:50.74 victory in the 4A state record. Only minutes later, Mayhew would see Yount regain his state record in winning the 5A state title in a new personal best time of 1:50.59.

Despite the fact that they live in the same state, Yount and Mayhew have never faced head to head in an 800 meter race. Their first encounter and opportunity to truly determine who is the greatest half miler ever from the state of Colorado will be settled next weekend as they are part of a stellar Brooks PR Invitational 800 meter field. Coming down from elevation will also be a great opportunity for both to run under 1:50 for the first time.

Both have or had tune-up races between their state meet building into Brooks PR. Yount won the fast section at Great Southwest Classic in Albuquerque, but a slow strategic race cost him the overall win as another runner from a slower section beat his time. Meanwhile, Mayhew will be racing at the Golden West Invite in California this weekend in one of his first races at sea level.

Yount has six career races of 1:53 or faster, while Mayhew has him surpassed with a total of nine races at that time or better. While Mayhew has the fastest mile PR of 4:13 over Yount at 4:22 for 1600 meters, Yount actually has the better 5K time from cross country at 15:33 to Mayhew's 15:40.

However, Mayhew did beat Yount in their last head to head race in cross country to close out the fall, but it is all about the 800 and not the 5K bragging rights that these two will be concerned with at Brooks PR.

Both Blake Yount and William Mayhew will be competing at the Brooks PR Invitational in the boys 800 meter run on Saturday, June 20th in Seattle. Who will come out with the Fastest PR then? Watch LIVE on MileSplit and Flotrack on June 20th to find out!