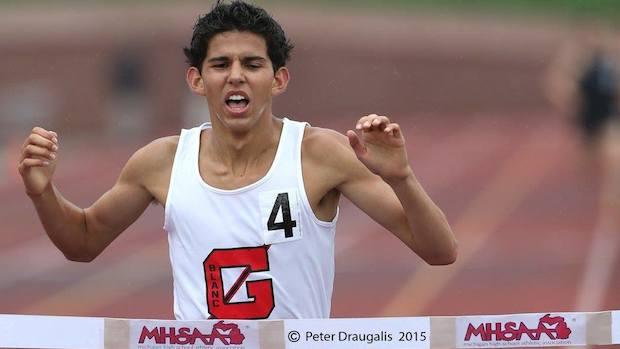 In his final Michigan state meet 1600, Grant Fisher had a special setup with another finish line tape to cross after the original finish at 1600. That's right another finish line for the full mile! Fisher was ready to put on one final show for his fans in his home state.


After going through the first two laps in around 60 seconds splits for each, the recently graduated Grand Blanc (MI) senior hit 1200 meters for the bell lap in 3:02. On a rainy day at Rockford High School, former home track of 2-time Foot Locker champ Dathan Ritzenhein, Fisher powered his way down the final stretch with his sights on becoming only the seventh high school prep to break four minutes. 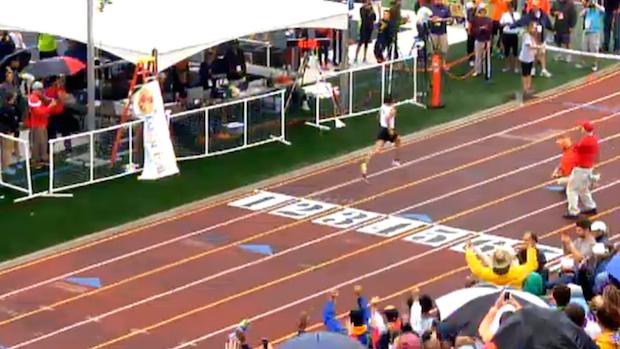 He fell just short of that goal as the webcast announcer yelled "3:59.8 unofficially!" as he crossed the line creating some confusion for those watching online from home, if in fact, Fisher had done it. However, the announcer was referring to the 1600 meter finish line which the fully automatic timing captured Fisher in a new Michigan state record time of 4:00.28. Meanwhile, his mile time of 4:01.66 looks to ranks the future Stanford Cardinal as the US #12 all-time performer in the event just off the top 10 list behind Gerry Lindgren at 4:01.5 from 1964. 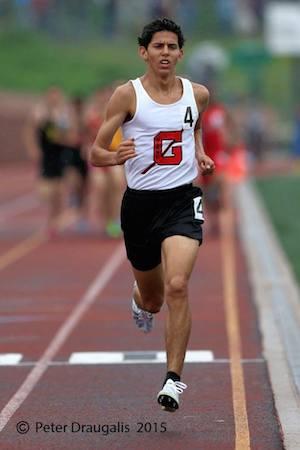 Fisher was not finished at the 2015 Michigan State Lower Peninsula Division 1 Championship Meet at Rockford High School. He later raced in the 3200 meter run pulling away from a deep field to run his second fastest 3200/two mile time ever with the second best time in state meet history at US #12 8:53.41. Only Dathan Ritzenhein has run faster in Michigan state meet history than Grant Fisher.

Next up for Fisher will be several high profile post-season races against the nation's elite including the adidas Dream Mile on June 13th in New York City and Brooks PR Invitational two mile on June 20th in Seattle. In both races, Fisher is the defending champion.

Unfortunately, the Dream Mile will not have the highly anticipated matchup with Fisher and sub four minute miler Matthew Maton, who pulled out this past week due to an achilles injury. The race will still be another great opportunity for Fisher to break minutes for the first time and do it in a deep high school only field.