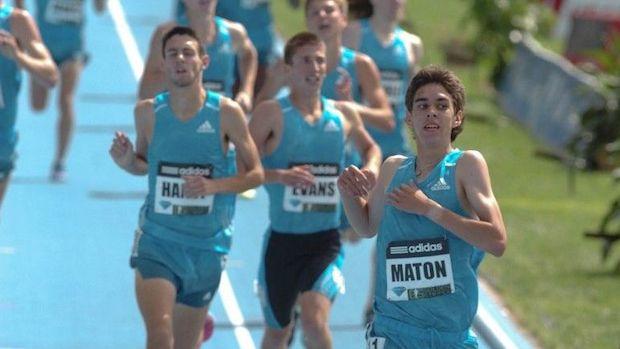 Matthew Maton, the fourth-fastest prep miler in history and just the sixth high schooler to break four minutes, will not race the adidas Dream Mile on June 13, per a twitter post this afternoon.

The Summit, Ore. senior cited lingering Achilles pain as the reason for his departure from the highly anticipated race. He was scheduled to race the mile at the Prefontaine Classic in Eugene tomorrow evening, but pulled out last week. 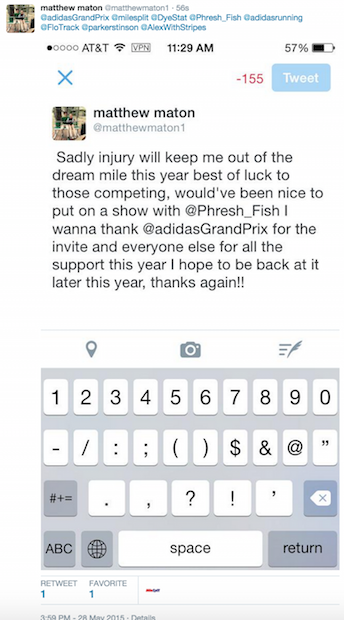 The soreness dates back to the Oregon Twilight, when Maton ran his historic 3:59.38 at his future home track of Hayward Field at the University of Oregon.

"It was the race," he said. "I made the decision to wear a pair of brand new spikes without breaking them in and I immediately felt it after the race."

Maton said the spikes were an older Nike model, but was unsure of the exact name.

Other tentative post-season plans included the 1500m at USATF Junior Nationals, with potential advancement to the Pan-American Junior Championships on the line.

"I'm really bummed," Maton said. "It's gotten a little better, but I don't think I'm ready to race on it anytime soon. I hope to be back by [Juniors] but I'm not gonna rush it to make it worse."

Another injured invitee to the adidas Dream Mile is Michael Vitucci of St. Xavier, Ohio, who cited a muscle strain. The two-time Ohio State Champion won the New York Relays auto qualifier in 4:14.85.

"Sadly, my high school season is over," he said. "I tried doing some strides before districts and it just wasn't gonna happen. So I will not be racing the dream mile or any post season meets."

The loss of Maton and Vitucci opens up two more spots for the Dream Mile, which will host a field of 14 athletes. Prior to their announcements, just one spot was still open.