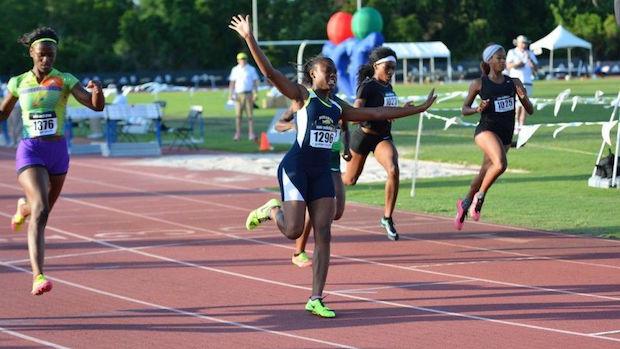 With a sizzling 11.43, Khalifa St. Fort ran the third-fastest wind-legal 100m in the nation this year to win the Golden South Classic last weekend. The victory was noteworthy not only as the final auto qualifier for the adidas Dream 100, a showdown amongst the nation's best sprinters at the adidas Grand Prix on June 13, but also for defeating the best short sprinters in the state of Florida.

Some of those girls were her former teammates. St. Fort, a junior at St. Thomas Aquinas, was not part of the Raiders' third consecutive Florida Class 4A State Championship team title earlier this month.

No one will say exactly why, but the powerhouse sprint program - which has produced multiple state champions as well as the national high school record in the 4x200m (1:33.43) last year - may be without the fastest kid in school.

That was her last meet, period, this season before Golden South.

St. Fort is no longer coached by Alex Armenteros, the STA head coach and 2014 National Track and Field Coach of the Year, as named by the National High School Coaches' Association.

But his replacement is no slouch. That's Ato Boldon, the four-time Olympic medalist and the Trinidad and Tobago national record holder for 50m, 60m and 200m. Since retiring from the sport in 2004, Boldon has developed into one of the most recognizable personalities in the sport of track and field. He is an ESPN and NBC Sports broadcast analyst and was recently named an IAAF Ambassador.

"Understand this is not what I do - go seeking high school athletes," Boldon said. "I am busy traveling the world and broadcasting in my jobs as broadcaster and ambassador for the sport, but when I see a young talent being wasted, I am compelled to get involved." 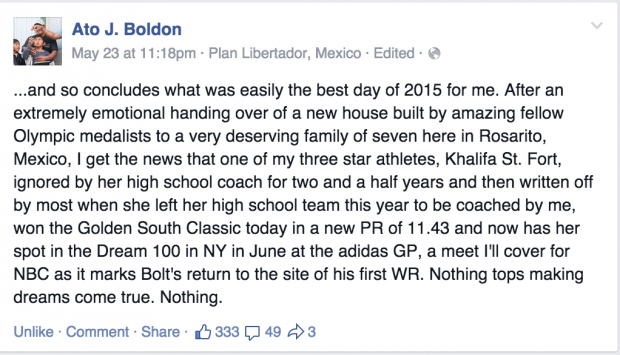