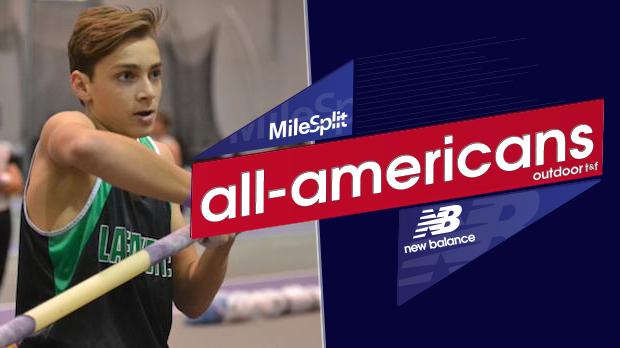 Armand "Mondo" Duplantis (Lafayette, LA) may only be a freshman, but he grew up with a pole vault pit in his backyard and already has years more experience than many high school athletes. He is the National Freshman Class Record Holder at 17-4, which ranks U.S. No. 4 on the outdoor leaderboard.

1. Deakin Volz (Bloomington South, IN - Sr.) - Volz set the indoor National High School Record in the pole vault at 17-11.25, en route to winning the New Balance Nationals Indoor Championship. He also finished eighth at the senior level USATF Indoor Nationals. Volz has 13 career vaults over 17 feet in competition and currently ties for U.S. No. 1 on the outdoor leaderboard with a season best of 17-7.

2. Paulo Benavides (El Paso Franklin, TX - Sr.) - The University of Kansas commit held the National High School Record briefly during the indoor season (17-11) before Volz bested the mark. Benavides and Volz traded the nation's top ranking throughout the indoor season and finished ranked 1-2, as Benavides finished runner-up at New Balance. He is the top returner from the 2014 New Balance Nationals Outdoor Championship, where he also placed runner-up. The senior currently ranks U.S. No. 3 with a season-best 17-6.5 and has 15 career competition clearances over 17 feet.

3. Brandon Bray (El Paso Franklin, TX - Sr.) - The senior is currently tied for U.S. No. 1 with a 17-7 season-best to win his District Area meet. He beat Benavides, a former National Record Holder, head-to-head to win the Texas Relays after placing third at New Balance. Bray was fourth at the 2014 New Balance Nationals Outdoor.

4. Armand "Mondo" Duplantis (Lafayette, LA - Fr.) - The wunderkind has consistently smashed his own National Freshman Class Record in the vault nearly every time he competes. He holds the indoor standard at 16-9.5, during which time he also set the Louisiana State Record and won the Millrose Games. Mondo finished runner-up at the Texas Relays with his first-ever clearance over 17 feet and currently ranks U.S. No. 4 with a season-best of 17-4.

5. Sean Collins (McGill-Toolen Catholic, AL - Sr.) - The four-time Alabama State Champion cleared 17 feet for the first time this season and currently ranks U.S. No. 5 with a season-best of 17-3.25. His state meet is already past, but he was runner-up at the Golden South Classic last year and will likely return to the late May meet in pursuit of the title.

6. Tommy Dial (Jenks, OK - Sr.) - The defending Oklahoma State Champion set the Kansas Relays meet record this season with his 17-0 clearance. He ranks U.S. No. 6 with a season-best 17-1 performance, per a third-place finish at the Texas Relays.

7. Ryan Wilkes (Valley View, PA - Sr.) - The Rhode Island recruit always comes up with big performances in the clutch. The two-time Pennsylvania State Champion is also two-time All-American; he finished fourth at the 2015 New Balance Nationals Indoor Championship. He most recently won the Robert Spagna Championship meet, tying his PR of 16-6, to rank U.S. No. 13.

10. Antonio Ruiz (Tomball, TX - Sr.) / Will Herrscher (Rockwall Heath, TX - Sr.) - The seniors each recently recorded their first-ever clearances over 17 feet, to tie for U.S. No. 7 on the national leaderboard. Both made a clean sweep of the Texas championship season thus far and will face off in Class 5A at the Texas State Championship.