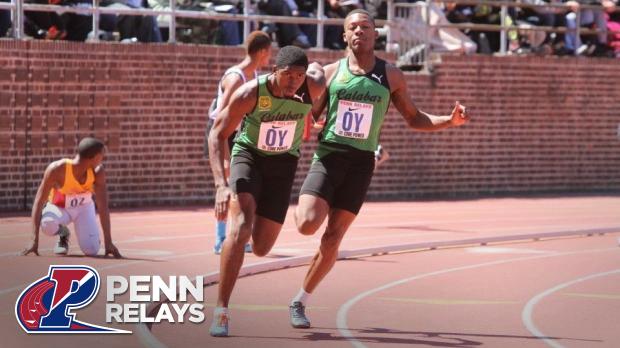 With captain Michael O'Hara reinstated, Calabar High School of Jamaica looks to make history in the 4x100m and 4x400m Championship of America races.

Saturday, April 25 marks Day 3 of an action-packed weekend of track and field at The Penn Relays Carnival at the University of Pennsylvania's Franklin Field. Detailed below are all high school individual championship events and relay Championship of America events for Saturday, April 25.

With Jamaica's Jaheel Hyde (Wolmer's Boys School, JAM) declared ineligible for high school competition, the road to glory opened up for an American. Hyde, the IAAF World Junior Champion for 400mH with a PR of 49.01, forfeited his amateur status last week in accepting a sponsorship deal. In his place, Jamaican Champs runner-up Marvin Williams (St. Elizabeth Tech, JAM), who ran 50.59 last month, will look to keep the title in the islands versus U.S. No. 1 John Lewis (Cheltenham, PA) and last year's third-placer Rai Benjamin (Mount Vernon, NY), who has a PR of 51.86 (not to mention 46.19 in the flat 400m!).

Track fans could see history on Franklin Field on Saturday, as Jamaican Junior National Record Holders in Calabar High School will run their recently reinstated captain, Michael O'Hara. The 10.19 100-meter runner was ruled ineligible for amateur competition last week for signing a sponsorship deal, but the ruling has been overturned and the 39.08 performers have their star anchor. The Relays meet record is 39.72, set by Jamaica College last year.

U.S. No. 4 ranked Nordhoff (CA) enters the Championship of America with the fastest qualifying time of 7:52.12; they own a season-best 7:47.5 to win the Arcadia Invitational. No. 2 qualifier Arlington (NY) is a returning All-American from indoor nationals, where they ran 7:45.95 with a 1:49 split from James Asselmeyer.

Teams will race prelims starting at 9:10 AM, but there is already one high school squads on everyone's minds: Calabar (JAM). The six-time event champions last won in 2013 but have clocked an astounding Jamaican Junior National Record of 3:06.76 this year. That time was without captain Michael O'Hara, who split 45.7 on last year's third place squad. The Relays record is 3:08.72

Kingston College of Jamaica features star 17-year-old Akeem Bloomfield, who ran 44.93 at Jamaican Champs to set the Jamaican Junior National Record. The squad raced 3:08.4 for runner-up honors at Jamaican Champs; they have not won this event since becoming the first Jamaican team to do so in 1965.