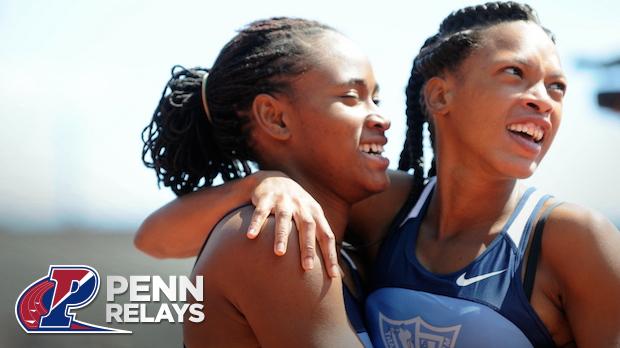 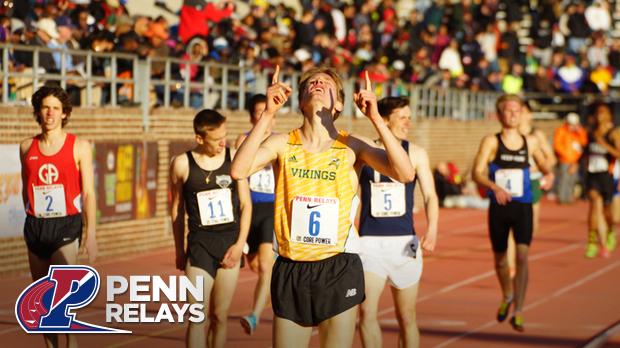 To win an individual title at the Penn Relays Carnival is quite an accomplishment.

Andrew Hunter did one better at one of track and field's most prestigious meets.

The Loudoun Valley (VA) junior earned his second straight individual title inside Franklin Field on Friday. Just a year after capturing the two-mile event as a tenth-grader, Hunter was the first across the line in the mile by winning the championship event with a personal-best time of 4 minutes, 7.15 seconds.

The gifted runner matched the feat of U.S. Olympian Matt Centrowitz, who won the 3K and mile titles in back-to-back years in 2006-07 while competing for Broadneck (MD). To add to Hunter's special night, it was also his first time running the mile distance under 4:10.

"It's great to finally break the barrier. I wanted to do it at Penn because this meet is special to me, obviously," he said. "That double is incredible. I am really excited. It's really cool that Matt Centrowitz is the guy that did that because he is incredible."

"At about 300 to go I felt really good so I really started pumping my arms hard," he said. "I have really been working hard in my training. The last 300 meters I just felt great and had a little bit left in the end." 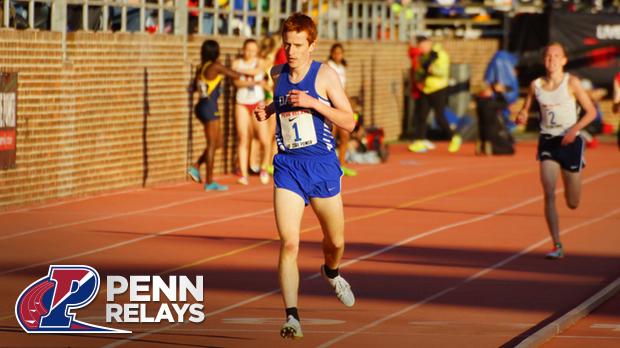 Alex Ostberg (Darien, CT) knew what he had to do during the closing stages of the 3,000-meter run at the Penn Relays Carnival. He's been preparing for high-level meets like these long before he toed the line of Friday's race.


"I have just done so many workouts to simulate these conditions, so many workouts where I have closed," he said. "I spike up and run 4x400s in 60 seconds, and that's exactly what I had today. With a lap to go I heard the bell, and I exploded. I was like, 'Alright, I have done this so many times in practice, there is no reason I can't do it now.'"

Demonstrating a dominating kick with less than a lap remaining, Ostberg broke away from Aidan Tooker (Saratoga Springs, NY) to claim the individual prize with a winning time and US #1 of 8 minutes, 23.95 seconds. Tooker placed second at 8:27.34 (US #2).

"It's unbelievable. I think the only other time I performed like this at a meet of this caliber was last year at the outdoor nationals when I won the 5K," Ostberg said. "It's my senior year. It's the last shot I got. If there is anytime I want to win races like this and make it that more special, it's senior year. I want to kind of leave high school on a high note and I just wanted to perform today in a relative local crowd. I live only about two hours away. All my family is here today. My coaches from my school. I am so happy I could do it for them."

The Darien runner, who placed third in last year's event, was the pre-meet favorite. He was given that distinction based on his third-place finish in the two mile this past March at the New Balance Nationals where he clocked an 8:48. He also had the target on his singlet because the race was minus last year's champion Drew Hunter (Loudoun Valley, VA), who opted not to defend his title and instead compete in the mile, a race he won on Friday.

Nonetheless, the field still featured some strong competitors, most notably Tooker, who was fourth at NBN with an all-time best of 8:56.

"I knew, time-wise, I was the favorite, but I knew that Aidan Tooker is a fantastic racer as well," Ostberg said. "I knew that he ran exceeding well at (NBN) where he ran 8:56. As Drew Hunter surprised last year, I think anyone can win on any given day."

Not on this given day. In this one, it was the favored Ostberg that was holding the gold watch at the end. 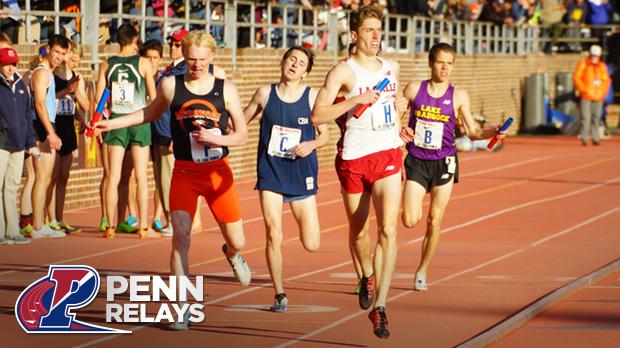 In what the La Salle Academy (RI) coach labeled as the most memorable race he's witnessed in his career, his distance medley relay squad made history Friday night at the Penn Relays Carnival.

The Rams captured their first Championship of America event since 1942 with a winning time of 10 minutes, 12.10 seconds. Anchor Jack Salisbury bolted into the lead with 300-meters left and never let up, finishing with a final 1,600m split of 4:14.52.

"It feels amazing, unbelievable," Salisbury said. "They put me in a good position. I just had to close out for these guys. We were coming in here with the attitude that we were going to win."

West Windsor Plainsboro (NJ) and Fordham Prep battled for the top spot the first 1,200m, but a tight pack that included La Salle was just a few strides behind the front-runners. Junior Matt Bouthillette, a consistent leadoff leg, ran a solid time of 3:09.44 for his split.

"After the first lap I kind of fell asleep a little bit and was stuck in the middle of the pack," he said. "It was hard to move around. There was a lot of people out there. I worked hard to try and get as close to first as I could. I came up short. But we got the win. That's all that matters today."

Cam Morenzi, a relative newcomer to the relay, hit his 400m split at 50.96, Paiva ran a PR of 1:57.20 for his 800m leg, one that brought the Rams from fourth to third and put Salisbury in perfect position to get the job done.

"I was just trying to get out there and get Jack in a good position," Paiva said. "The fans definitely got me pumped up. I don't know. It's crazy."

Back in March, all but Morenzi were on the Rams' victorious 4x1 Mile relay team at the New Balance Nationals Indoor Championship. McGinn ranks his special squad's latest win at the top of the list.

"This is absolutely amazing," he said. "This the highlight of my coaching career." 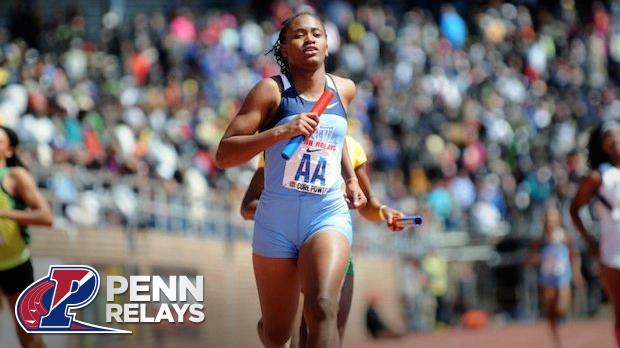 When it comes to the Championship of America girls' 4x100-meter relay, the one U.S. team that has been a consistent top performer in the event is Long Beach Poly.

Other than the Jamaican squads that make the long trip to the Penn Relays Carnival each year, the California school has also made the lengthy trek to Franklin Field well worth it.

It was status quo again on Friday.

Jamaica continued its supremacy in the event by sweeping the top four placements. But it was the foursome from the west coast that was the first U.S. finisher, taking fifth at 46.66. Edwin Allen won its second straight title and fourth overall with a time of 45.40.

"We don't pay attention to (Jamaica)," admitted second leg Shauna Helps. "We just focus on our own race because if we don't we are going to get distracted." 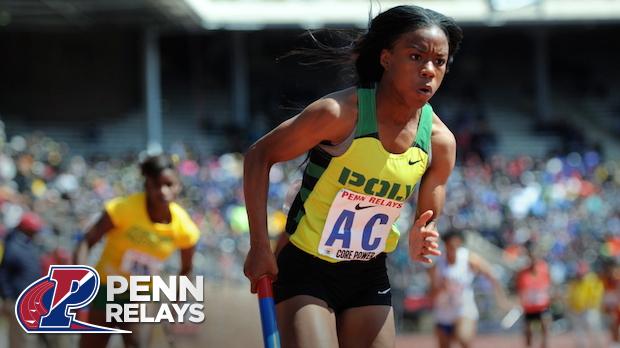 Long Beach, which is the only American squad to win the COA event in the last 33 years with four victories since 1982, accomplished one of its objective entering the meet.

"The goal was a U.S. No. 1 and make sure our handoffs were right and do everything we are supposed to do," said third leg Maya Perkins.

With its time, Long Beach replaced Nansemond (VA) as the top team in the nation. 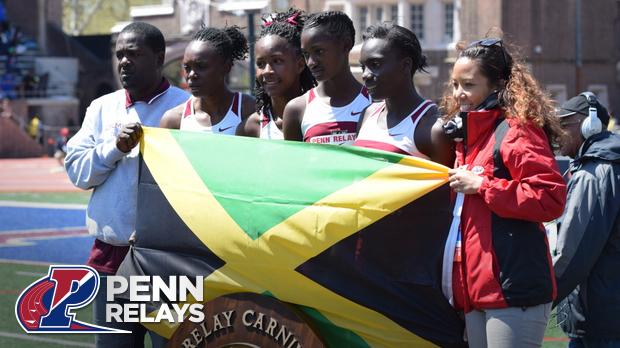 In a Jamaica-dominated event, Western Branch (VA) was looking to make it three in a row for a U.S. squad in the 4x800-meter relay at the Penn Relays Carnival, continuing the streak by Columbia (NJ), who won the last two.

The Bruins couldn't quite prevent Jamaica from returning to its customary spot on Friday afternoon, but it did earn the gold watch as the top American finisher.

Thanks to a brilliant anchor from junior Amanda Thomas, the Virginians finished second overall with a nation No. 1 of 9 minutes, 7.71 seconds. Holmwood Tech earned its record eighth victory in the event with a time of 9:01.31, the slowest winning time since it claimed the 1999 title.

Thomas recorded the fastest 800m split in the race with a 2:07.83 effort. The Western Branch junior, who has 56-second 400m speed, was more than seven-seconds faster than her individual best.

“It feels good," she said, “because I know I tried my best."

Not to be forgotten by Western Branch was a strong leg from junior Faith Hill, who brought the Bruins from 11th to third by the last exchange with a 2:11.20 split.

“I just wanted to get up front as close as possible," she said. “That was my main goal." 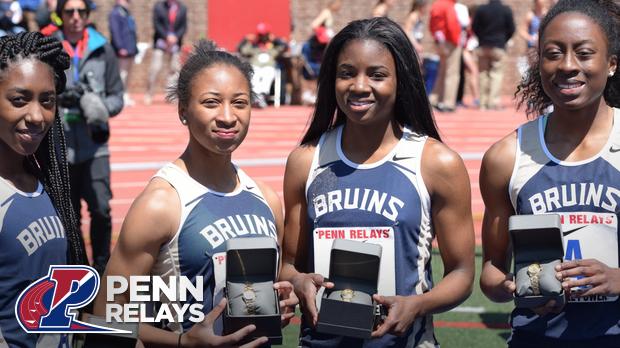 Leadoff Ces'shay Joyner was timed in 2:25.70 for Western Branch and second leg Jewel Smith, who placed third and first U.S. finisher in the long jump on Thursday, was clocked in 2:22.99.

“It feels great, especially because this is my senior year," Smith said. “Why not leave with a big bang?"

Jamaica took third overall in the race with Vere Tech securing the position with its time of 9:13.06. Great Valley (PA) was fourth at 9:14.81.