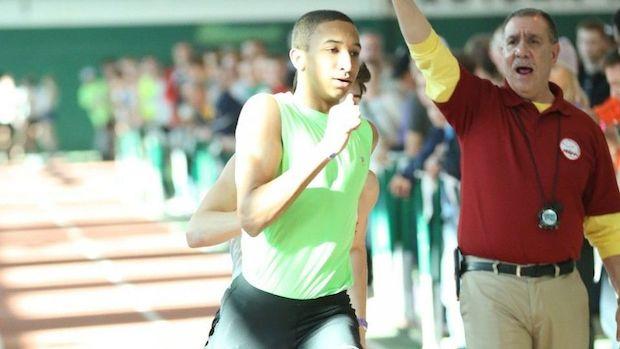 Though his US #1 mark was finally surpassed by John Lewis (Cheltenham, PA), Terrell Jackson (Memphis, TN) still reigns as the national scene's monster kicker. His 1:50.63 mark ranks US #2 and with Lewis skipping the open race to focus on the relays, the junior is the favorite for his first national title. But it won't be easy. Elias Graca (Fox Chapel, PA) has a killer kick down the straightaway and is the only other prep under 1:51 this year at US #3 1:50.86. Defending New Balance Nationals Outdoor 800m Champion Donavan Brazier (Grand Rapids, MI) is ranked US #5 1:52.54 but will be dangerous to watch. Don't sleep on James Asselmeyer (Arlington, NY), who has split 1:50 on relays this year and ranks US #2 for the 1k at 2:25.86. 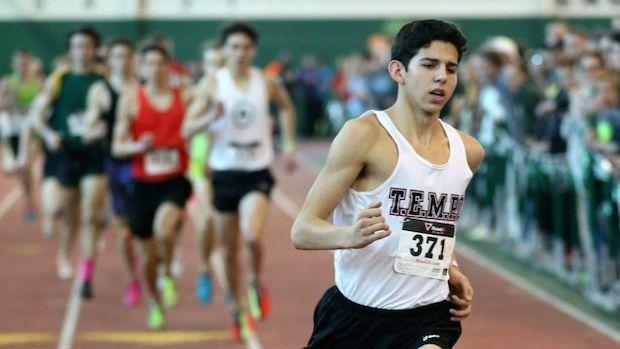 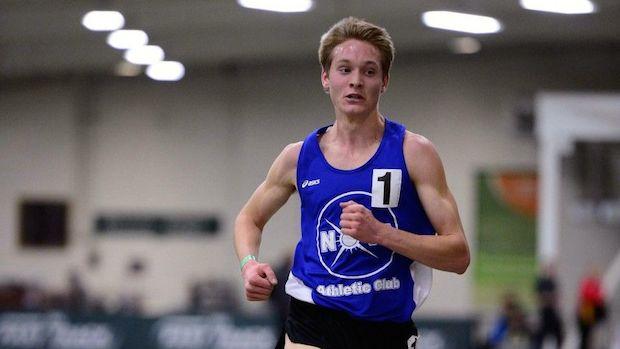 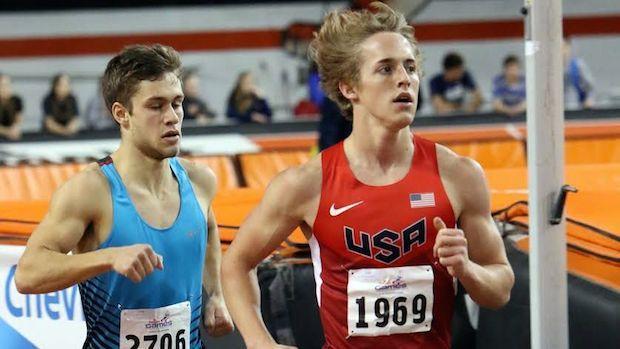 Preps typically only race this event at the national championship, leaving pundits to speculate based on cross country strength and two mile prowess. Elijah Armstrong (Pocatello, ID) bypassed the 2 Mile, where he ranks US #2 9:01.04 for 3,200m and US #4 9:14.09. The Boise State signee is a proven distance specialist, having recorded a third-place finish at Foot Locker Nationals this past fall as well as a runner-up, 14:29.58 finish at the 2014 New Balance Nationals Outdoor and a 14:48.72 third place at last March's NBN Indoor. US #2 9:08 Two Miler Eric van der Els (Brien McMahon, CT) will warm up for the Two Mile Championship with the 5k, his first appearance in a national championship. 2014 New Balance Nationals Outdoor Two Mile Champion Mike Brannigan (Northport, NY) will also race; he is the US #6 ranked 3,200m runner this year at 9:05.5. Foot Locker finalist Casey Comber (Hatboro Horsham, PA) and St. Benedict's Prep, NJ XC star Edwin Rutto can't be overlooked either. 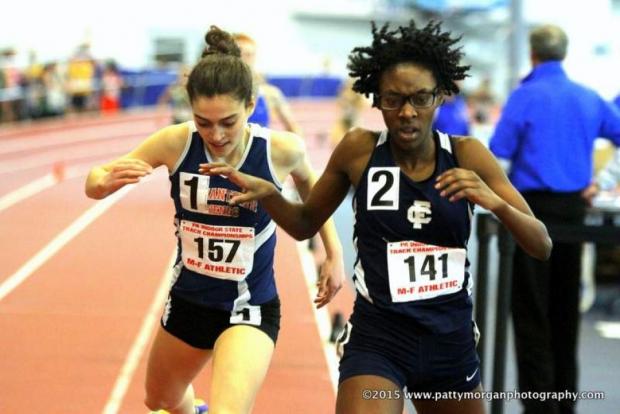 US #1 2:09.21 half miler Ersula Farrow (Oak Park, MI) leads a slew of six girls who have run 2:09 for 800m this year, including Sammy Watson (Rush Henrietta, NY), the National Sophomore Class Record Holder for 1k at 2:47.27 and Millrose Games Mile Champion Catherine Pagano (Northern Highlands, NJ). Gabrielle Wilkinson (Friends' Central, PA) and Sarah Walker (Germantown Friends, PA) will rematch after their epic battle at the Pennsylvania State Indoor Championship, where they finished in a dead heat at US #3 2:09.56. Simplot Games Champion Kaley Ciluffo (Pleasant Valley, IA) will also be in the mix. With nearly all of these runners recording their season-best in a solo effort, expect someone to drop a big US #1 when they all meet in New York. 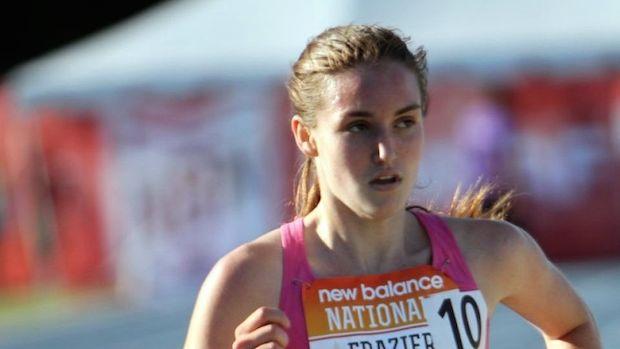 Ryen Frazier (Ravenscroft, NC) is another level in the mile this year. The NC State commit ran her nation-leading 4:49.78 1,600m during the cross country season and her US #1 4:41.56 Mile en route to placing sixth in a field of professional and collegiate runners at the Hilton Garden Invitational. Other top entrants at 4:50 this year include Millrose Games Mile Champion Catherine Pagano (Northern Highlands, NJ), Pennsylvania State Champion Marissa Sheva (Pennridge, PA) and Olivia Sargent (Pennsbury, PA), the runner-up in both of those races. 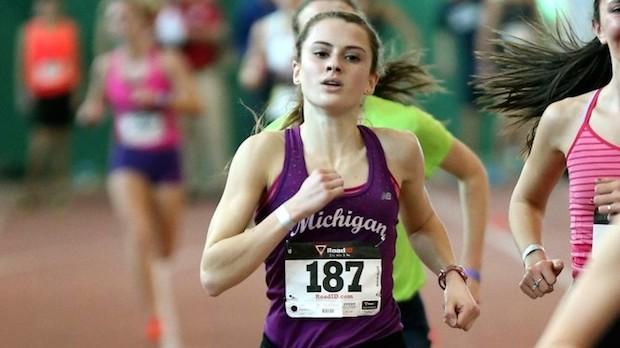 Michigan rivals Sarah Kettel (Capital Homeschool, MI) and Audrey Belf (Birmingham Seaholm, MI) will have another epic battle, this time joined by several athletes who have run under 10:35 for 3,200m. Kettel is US #1 at 10:28.82, though Belf (US #3 10:31.11) defeated her for the Michigan State Finals crown. Virginia State Champion Kate Murphy (Lake Braddock, VA) ran her US #2 10:30.82 3,200m solo and will be eager for competition, as will defending New Balance Nationals Outdoor Champion Hannah DeBalsi (Staples, CT), US #1 10:26.09 for Two Miles; and Pennsylvania State Champion Madeleine Davison (North Allegheny, PA), US #1 9:47.93 this year. Also of note, Ryen Frazier (Ravenscroft, NC) is appearing to go after her sister Wesley's 2013 distance triple as she is entered in the Mile, Two Mile and 5k. She ran 10:12.26 for 3,200m at an outdoor track meet in November. 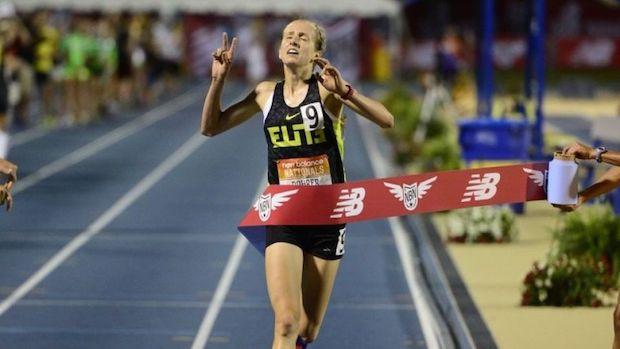 Two-time Foot Locker Nationals Champion Anna Rohrer (Mishawaka, IN) enters as the defending New Balance Nationals Outdoor Champion in the event with her 16:16.97 win last spring. She took the winter mostly off from racing, though the Notre Dame signee did record a runner-up finish at Great Edinburgh Cross Country and a solo US #5 10:32.17 3,200m. The event will be the first of three for Foot Locker Nationals runner-up Ryen Frazier (Ravenscroft, NC), who looks to be going for the distance triple. Other top entrants doubling back from the Two Mile are the nation's top 3,200m and two miler in Sarah Kettel (Capital Homeschool, MI) and Hannah DeBalsi (Staples, CT) respectively.

Two of Virginia's best distance runners will also two the line in sophomore Libby Davidson (EC Glass, VA) who got 6th place at Foot Locker XC Championships this past fall and Weini Kelati (Heritage, VA). Don't be surprised if Kelati threatens for the win as the Eritrean native has the fastest 3k out of any current high school girl with her 9:12.32 ran at the IAAF World Junior Championships this past summer. In that same race, Stephanie Jenks (Linn-Mar, IA) represented the USA and will also toe the line for the 5k on Friday. Look out for Bella Burda (Arlington, NY), US #2 9:53.16 this year, as well.