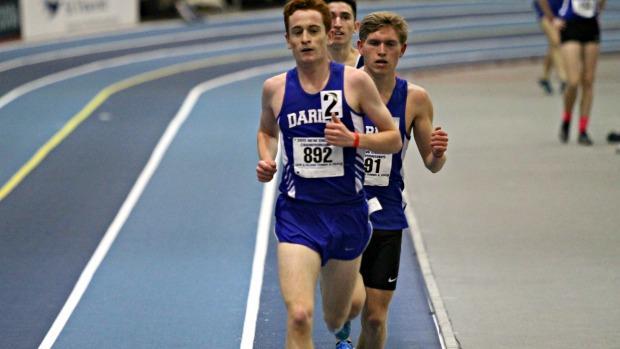 Alex Ostberg won the New England Championship 2 Mile in a nation-leading time of 9:00.58.


It's safe to say that Alex Ostberg is back. With the New Balance Nationals just a few weeks ahead, that's good news for the Darien High senior and perhaps bad news for the rest of his competition.

After dealing with pneumonia for the early part of the indoor season, Ostberg has gradually built himself into race shape. He flat-out proved it Friday night with a dominating performance in the two mile run at the New England Championships.

Breaking away from the pack with a little more than a half mile remaining, Ostberg came a few strides away from breaking the meet record with the fastest time in the nation of 9 minutes, 0.58 seconds. His performance led a 1-2-3 sweep by the Nutmeg State with Brien McMahon junior Eric Van de Els finishing second in 9:08.67 and Darien junior Armstrong Noonan placing third in 9:09.15.

"I had a pretty good speed workout a few days ago and it kind of gave me a good indication that I am in good shape," Ostberg said. "My confidence has been getting higher and higher every week. I am feeling more like my old self, absolutely."

The Stanford-bound runner was one of three athletes that produced U.S. best at the regional competition, held at the Reggie Lewis Athletic Center in Boston. Another Connecticut runner broke the tape in the girls' two mile with Staples standout Hannah DeBalsi capturing her third straight title with a season-best time of 10:26.09. In the long jump, Kate Hall of Lake Region (Me.) improved on her nation No. 1 with a meet record of 20 feet, 6 inches. The senior was the meet's only double-winner, also copping the 55-meter dash with a PB of 6.95, a time that ties for third in the country. 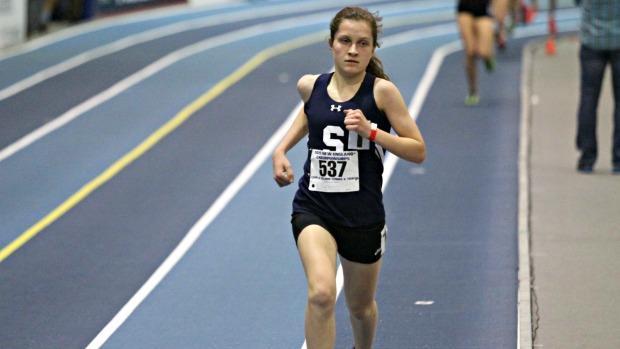 Ostberg, a runner-up in the two mile at last year's NE meet, was aiming for a time in the low nine-minute range. And it was evident he meant business on Friday. He took the lead from the gun and with his two state rivals on his shoulders, he passed the opening mile a shade under 4:30.

"I think there were my fair share of doubters going into the indoor season not sure I could hold it after my good X-C results," said Ostberg, who was one of the top harriers during the cross-country season where he won state and NE titles and was ninth at Foot Locker Nationals.

"When I got sick it was hard to kind of explain to people I am in it for the long term and every race I just have to get my legs from under me. I mean, my pneumonia really knocked me out for about a month. Running about nine (minutes) flat makes me think that I am in better shape than I was last year."

Much like she did in 2014 when she cruised to a near meet record with her first-place time of 10:12.95, DeBalsi turned Friday's race into her own personal time trial. She was already far ahead of the chase pack by the half mile and sizzled through her first mile at 5:05. DeBlasi wasn't able to maintain her record pace, but it wasn't because she felt fatigued.

"I wasn't really tired, just mentally I wasn't in the zone," she said. "I don't know what happened. I just had to get back into the zone."

For Hall, it was her second meet this season where she has exceeded the magical 20-foot mark in the long jump, and she did it twice. She went a half inch further than her previous best with a 20-2 effort in the preliminaries. Hall achieved her best on her first attempt in the finals.

"I knew if I got my foot on board and got some height I could definitely do it," she said. "I was really relaxed. I already set my goal of 20-2. I was like nothing else matters now. Even if I foul all my jumps in the finals, it doesn't matter. I already set a PR. It helped me relax more. It actually helped me with my steps."

Hall beat a talented field in the 55m dash. Finishing second was junior Briana Duncan of Cambridge Rindge & Latin (Mass.) with a time of 6.98 (US #7). Taking third was Hope (R.I.) senior Quashira McIntosh at 7.15.

"I just knew I had to have a good block start, which in the prelims I did not," Hall said. "In the finals it was much better. I had some good competition in the finals." 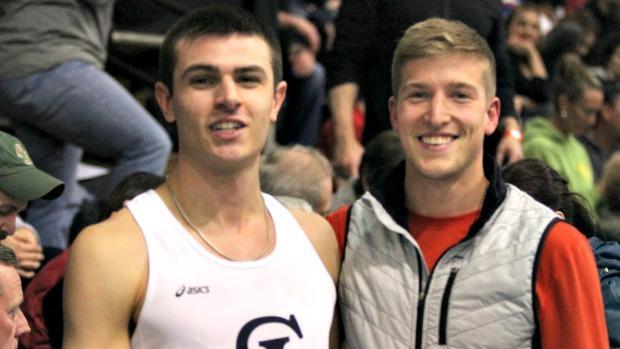 Joe Luongo poses with Casimir Loxsom, the New England Championships Meet Record holder in the 600m. Loxsom set the American Record in the 600m in January at 1:15.58.

La Salle Academy, which will be making an attempt at the national HS record for the 4x1 mile relay at the NBN, made a strong case that the mark is within their reach. The Rams swept the top three spots in the mile with junior Matt Bouthillette taking the crown with a time of 4:17.25. Sophomore D.J. Principe was second at 4:17.77 and senior Dan Paiva solidified third with a time of 4:18.04.

The race was without their teammate, defending champion Jack Salisbury. Salisbury, who clocked at 4:08.76 mile to place second at the New Balance Indoor Grand Prix at the beginning of the month, competed in the 1,000m. Winning the unseeded heat by a convincing margin, the Ram runner placed an eventual sixth overall with a best of 2:31.15. 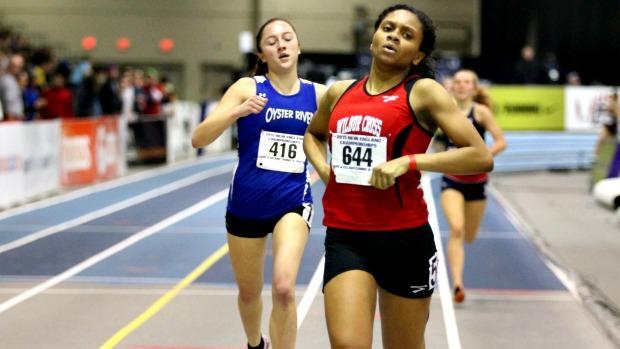 Rego did most of the pace-setting for the eight-lap race and broke away with 200m left. At that point, she was primarily concerned about Hughes, who had beaten her by a mere stride at the East Coast Invitational in Providence last month. 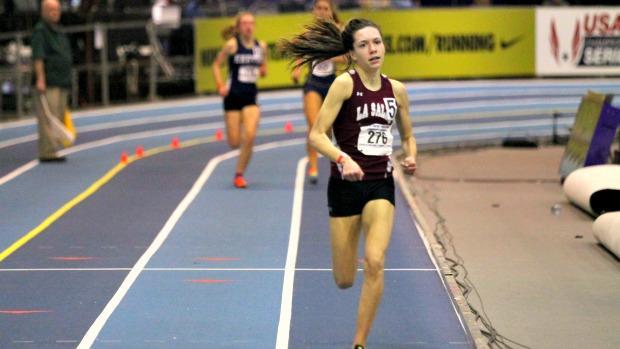