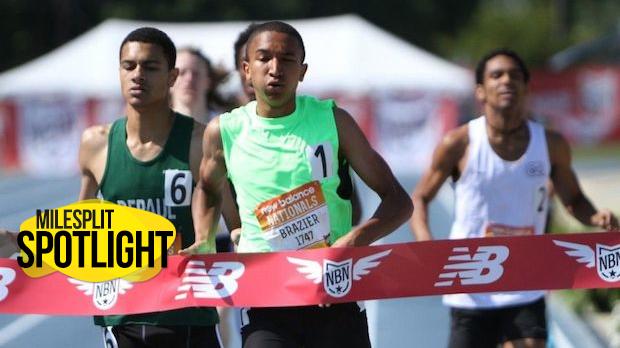 Last spring, he didn't touch the track for practice until mid-April.

“We had to wait for the snow to melt," he said.

And that's just on the boys' side.

Brazier is the defending national champion, but ranks just sixth on the Michigan descending order list for states. Three stateside preps have run 1:53 this winter, while Brazier's season-best is 1:55.41.

But the Texas A&M signee has raced to a nearly undefeated season - and it's his one loss that makes for the most intriguing storyline.

Brazier made his indoor mile debut in astounding form on January 30 at the Gazelle Sports Elite Meet at GVSU, racing to a then-US #2 time of 4:09.32 behind only Fisher, who has not lost a high school race since 2013. Brazier's mark stands as the nation's fourth-fastest time.

"He is running well ahead of expectations," said Kenowa Hills coach Kevin Winne. "I was expecting 4:13, 4:14."

"I just thought it would be a good opportunity to get my [mile] time down before outdoors," said Brazier. "Once outdoor season comes, my coach wants me to work on getting my 400 speed down. I can't really get my speed - my turnover - as well as I want to [right now] because it's so cold."

If the Kenowa Hills senior sounds unassuming, then, well - he is. Before last spring's national title, he approached the outdoor season with just a glimmer of hope for the state championship.

"Starting out in the spring [last year], I was coming off third place indoors for the 800," Brazier said. "At best, I thought I could become state champ in the 800. My coach and I didn't even decide to go [to New Balance Nationals] until two weeks before."

"Well, I'd say it was a pretty big surprise, especially considering I had to drag him kicking and screaming to the national meet," the 10-year veteran coach said.

"I was very nervous, I almost felt like I didn't belong there," Brazier said. "I think that's what held me back the first lap, I probably came through in 7th or 6th place at best, but I came through the second lap just as fast so at that point, I was just ready to go."

The then-junior broke 1:50 for the first time to win in 1:48.61, a new Michigan state record. Brazier was racing nearly 20 seconds slower for the 800m two years prior.

"He was running 2:06, 2:07 as a freshman," said Winne. "But even then, you could tell he was very talented. I told him, 'we have sent a lot of athletes to Division I schools and I think you have the most talent out of any of them.'

"'I just hope I'm still around when you decide to start working hard.'"

Over the past year, it's clicked. He may not have the best seasonal credentials going in, but there's no questioning that Brazier is ready to win.

"I'm trying to get anther state title in indoor this year," he said. "It's almost race strategy. I know if I can get in a position in a race, then the time will come through."