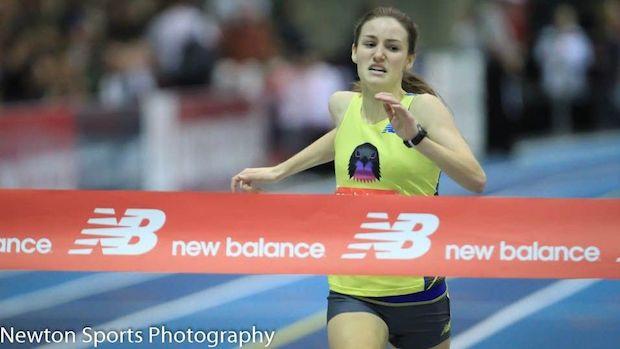 It was clear before the Junior Mile races of the New Balance Grand Prix that the potential was there for a runaway triumph from Ryen Frazier in the girls' event and the boys' winner could be anyone of a host of talented runners.

To no one's surprise, Saturday's races followed those scenarios to perfection.

Frazier, the senior from Ravenscroft School, N.C., made a definitive move just after the 400-meter mark and simply destroyed the 12-runner field with a meet-record of 4 minutes, 44.02 seconds on the banked oval of the Reggie Lewis Athletic Center. She was more than nine-seconds ahead of fellow North Carolina rival, Malia Ellington of Community School of Davidson, who placed second at 4:53.63.

In the boys' race, senior Logan Wetzel of Saline, Mich., had to hold off a gutsy effort from Jack Salisbury the final straightaway, edging the junior from La Salle Academy, R.I., at the line with a nation's No. 2 of 4:08.74. Salisbury finished second at 4:08.75 (US #3). In all, the top six finishers dipped under 4:12.

As for Frazier, she was making her third appearance at the NB Grand Prix. In her previous two races at the Boston event, she placed fourth, including 2013 when older sister and multiple national champion Wesley Frazier won the crown.

Unlike her sister, who broke away from the pack with about 300m left to post a convincing six-second win two years ago, Ryen Frazier determined her fate with still plenty of real estate remaining. Ellington did the early pace-setting, leading the field through a 72-second 400m split. Frazier burst to the front on the back straightaway, and simply never looked back. She hit the halfway mark at 2:22 and was 3:33 at 1,200m.

The senior, who captured the mile at the New Balance Nationals in June, had the confidence to make a bold statement early in the race, considering she was the only runner in the field that had broken 4:50. Just last week, she posted her all-time best by placing sixth against collegiate and professional runners at the Hilton Garden Invitational in North Carolina with a state indoor record of 4:41.56 (US #1).

"I knew I had the speed to run that fast," Frazier said. "I was thinking that if I could push and hold that pace I would feel good even if there was someone there."

It appears things are lining up for a special senior season from the North Carolina State-bound Frazier. Three weeks prior to placing second at the Foot Locker X-C Nationals on Dec. 12, she clocked a 4:44.2 mile at an All-Comers meet in her home state.

She's hoping to continue her success on the indoor oval. At the New Balance Nationals in mid-March, she plans to enter all three distance events (5K, two mile, mile), just like her sister Wesley did in 2013 when she captured the tough triple.

"I'll definitely sign up for all three. As far as winning all three, that's a little much," she said. "I don't think I'll run all three. I just hope to perform to the best of my ability. I haven't really set any time goals and place goals. I am just happy with my effort and happy with (today)." 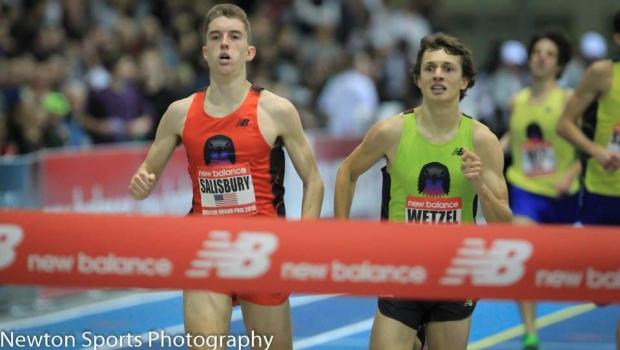 The exciting, down-to-the-wire affair in the boys' race was dictated in the early stages by Yale Track Classic winner Thomas Ratcliffe of Concord Carlisle, Ma. The junior standout, a soccer player during the fall months, went into the race with a 4:15.47 best, which he did at Yale where he posted a convincing two-second victory.

Ratcliffe led a tight pack through the first 400m with a fast 61-second split. He was still up front at 800m (2:05.66) with Wetzel, Salisbury, Jeremy Spiezio (Greenwich Central, N.Y.) and Sam Ritz (Germantown Academy, Pa.) in close pursuit.

With a loaded field that included a pair of 4:09 milers, Ratcliffe felt the best strategy for a possible win was to take control early.

"There was a lot of second-half guys in the race, a bunch of 800-meter guys, a bunch of guys that like to sit," he said. "My plan was to make them hurt in the middle and see what happens at the end."

Wetzel overtook the lead at 1,000m, which he passed at 2:37.3. The last three laps turned into a battle royal with several runners still in contention, including the Rams' Salisbury, a victor at last month's Dartmouth Relays. The junior, who possesses a devastating kick, made his bid for the title with a lap remaining.


"With a lap to go, I trusted my kick," Salisbury said. "I told myself that nobody is going to beat me, nobody is tougher than I am. But (Wetzel) was, a great race for him."


For Wetzel, his game-plan worked to perfectly. Just a week prior, he placed third at the Gazelle Sports Elite Meet in Michigan with a 4:09.81 clocking, the third fastest time in the country at the time.


"Coming in, I knew there was a lot of fantastic runners in this field so my coach and I laid out a plan that I wanted to stay near the front of the race and just be in position to make a move at the end," he said. "I just wanted to sit on the leaders and be in position to win when it came down to the kick. I was able to do that. There was a lot of guys that put up a great fight and it came out to a kick at the end and I was able to come out fortunate at the end. It was a great race by everybody."


Earlier in the meet, Salisbury learned about his La Salle teammates winning the DMR with a new nation No. 1 of 10:18.14. He improved on his indoor best by almost nine seconds!


In addition to La Salle defending its title in the DMR, Rush Henrietta Sperry dominated the field in the Sprint Medley. The New-York squad, ranked No. 1 in the country, easily captured the title with a winning time of 4:06.67, nearly eight-seconds faster than runner-up King Phillip, Ma., which was timed in 4:14.25. 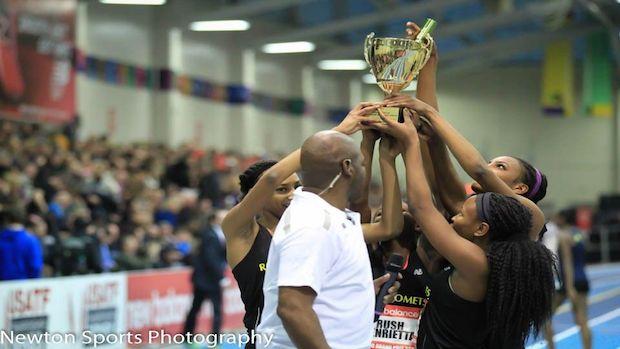