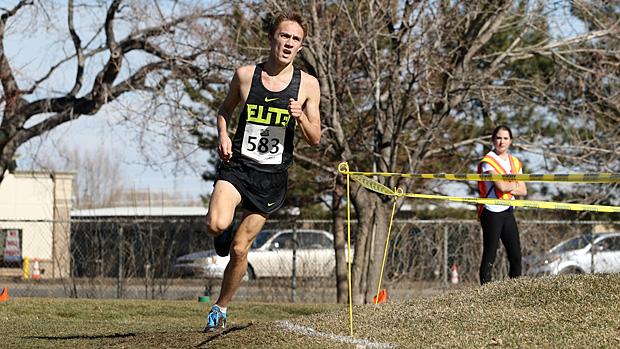 Geberkidane, a Denver, Co. native, was the top Team USA finisher as runner-up at last month's Bupa Great Edinburgh Cross Country run in Scotland. He experienced some quadricep fatigue and actually stopped near the final backstretch of the race to stretch his muscle. But Mantz was well clear of the field by then as he raced approximately the final 1,500m all alone.

The senior placed 10th at Foot Locker Nationals in the fall while battling a femoral stress reaction.

"I knew a lot of these guys could kick well and one thing when I got injured [was], I lost a lot of speed," he said. "I was just trying to get away from the seventh-place guy. It really could have gone any way today, I really think there's 10 guys in this race who could have won it."

Geberkidane crossed the line in 25:37.

He was just ahead of Buffs commit John Dressel of Mount Spokane (WA) at 25:39, who appreciated the stalwart cheering section of University of Colorado cross country runners.

Coloradans wrapped up the rest of the qualifying spots as Eric Hamer (Palmer Ridge) was fourth in 25:49, Buffs freshman Paul Miller (Poudre '14) was fifth in 25:53 and Paul Roberts (Lyons) took the last auto spot with a sixth-place, 25:58 performance.

The Buffs and Coloradans in general represented well for their home crowd, as Buffs freshmen Kaitlyn Benner and Valerie Constien ran away with the Junior Women's 6k race.

Benner (Monarch '14) was one of the top freshman at the NCAA XC Championships this fall, finishing 81st in 21:06. She and Constien (Battle Mountain '14) pulled away from the rest of the pack around 3k and never looked back.

"It's always been kind of a dream to run in this jersey," said Constien, who redshirted this past cross country season. "I didn't think I could do it but the last couple k's, I looked over at Kaitlyn and realized we're gonna do it."

Sneaking into the field of fierce collegiate competitors were Colorado natives Katie Rainsberger (Air Academy) and Lauren Gregory (Fort Collins). Both ran most of the race mid-chase pack, but worked together over the final 1k to pass girls and finish in third and fourth, 22:11 to 22:13.

"The 6k is a big step up," said junior Rainsberger, a self-professed miler. "But I knew I needed to just mentally be there... Going into the last loop, the girl in front of me clenched her side and I was like, 'she's hurting just as much as me, just go.'

Gregory, just a sophomore, finished 11th at Foot Locker Nationals in the fall and races Rainsberger often. But the USATF Championship experience was "like nothing I've ever felt before."

In the Open division, Chris Derrick of the Bowerman Track Club clinched his third straight victory at USA Cross Country, while Laura Thweatt of the Boulder Track Club captured her first women's title in the biggest race of her career.

The Junior and Open teams will travel to the Guiyang province of China for the IAAF World Cross Country Championship on March 28.