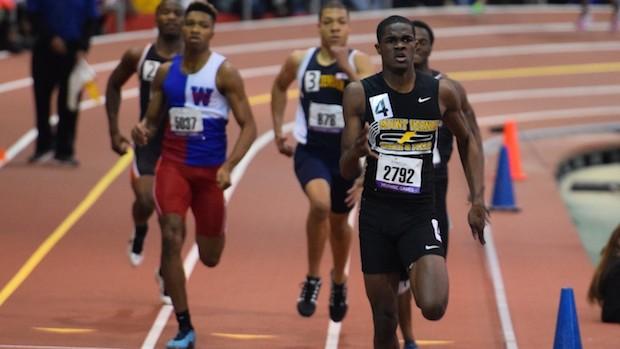 Take heed, snowstorm - there's a fire brewing at the New York Armory this weekend. This nationally televised prep battle will pit together the nation's best for more than a few dream races.

The Seeded Boys 300m and Seeded Girls 600m races look to be highlights as the fields will be making National Record attempts.


The Seeded Boys 300m features an all-star line-up of Rai Benjamin, Jaron Flournoy, Izaiah Brown, Anton Porter and Taylor McLaughlin in one of the most heated finals yet this season. Benjamin is the nation leader at the event with a solo 33.40 last weekend, but Flournoy - making the trip all the way from Michigan - boasts the widest range of any sprinter in the nation this year, with marks of US #1 47.35 400m, US #2 6.78 60m and US #5 21.66 200m. Richard Rose (Boys and Girls, NY) is missing from that start list, but he will be making his own national record assault in the Boys 600m along with US #2 Luke Germanakos and US #3 Joe Luongo.

The Seeded Girls 300m will be just as hot, even if off record pace as defending New Balance Outdoor Nationals 400m champion Zola Golden, now competing unattached, will face off against hurdle monster and US #1 38.52 300m performer Sydney McLaughlin (Union Catholic, NJ), Michigan's top sprinter in 55-second performer Anna Jefferson (Oak Park) and Arianne Strunkey (Taft, NY), who has run US #7 55.65 and US #4 38.80 300m this year.

The Seeded Boys 1k is a who's who of the distance circuit. James Burke, James Asselmeyer and Sam Ritz are currently the nation's top three in the event, leading with Burke's 2:26.75. The field also includes US #1 Miler Jeremy Spiezio, US #1 3k runner Conor Lundy and US #1 2-Miler Mikey Brannigan. Will Burke prove his No. 1 ranking? Or will a distance guy upset the field? How this race will play out is anyone's guess.