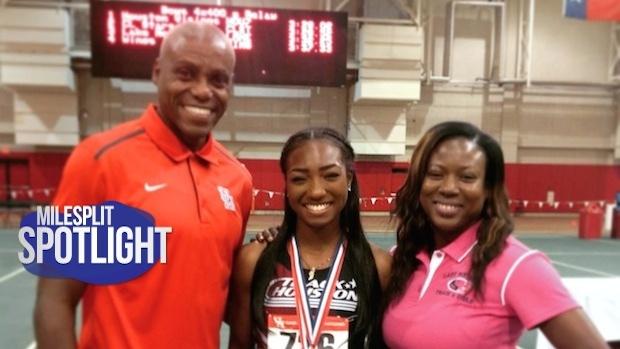 Samiyah Samuels grew up surrounded by track and field legends.

Her father, Issac - a two-time high school All-American - trained with Carl Lewis when both attended Willingboro High School in New Jersey and then, later, when both competed as student-athletes at the University of Houston.

Yep, that Carl Lewis - the nine-time Olympic gold medalist (plus one silver). The same one who lent his name to this past weekend's Carl Lewis Invitational at the University of Houston, where Samuels was named the Female Field Athlete of the Meet after winning the long jump (US #7 19-0) and the 60m dash (US #10 7.1).

The Cypress Springs junior never worried too much about the icons around the house. She just liked to jump.

“I used to line up laundry baskets in my house and I used to jump over them and that's how I got into long jump," she said.

Samuels began competing in track and field when she was six years old. But she was nowhere near the first out of the blocks.

“I wasn't fast at all," she said. “I used to finish the last one in everything we used to do and when I finally got to about 10 years old, I got serious into running and that's when I started talking to the Lewis family. I've known the whole Lewis family my whole life but I never showed that I loved track then the way I do now."

She ran as a member of Track Houston, one of the winningest youth track clubs in the country, until she moved to Virginia in first grade. Once up north, Samuels competed for the Southwestern Youth Association until moving back to Houston and rejoining her old club in fifth grade.

Career highlights with the club came in 2013, when Samuels won the 2013 USATF National Junior Olympic Championship long jump with an 18 foot, 1.75 inch leap, and this past summer in winning the 2014 AAU Club Championship with a leap of 19 feet, 10.75 inches. The mark still stands as her personal best.

She attributes most of her long jump techniques and knowledge to education from her father and Lewis. The multiple-time world recorder holder in the long jump and 100m often shot video of Samuels' run-up approach at practice and offered suggestions for improvement.

“I guess the word is 'blessed' to be put in a situation to know [Carl] because he's one of the greatest," Samuels said. “A lot of people who are my age don't get half the [support] I do at such a young age. I am already blessed from it. I think knowing Olympians helps me get in the right mind, asking them how they felt at certain races or how to jump at certain meets.

“It gives me an open mind for when I'm actually there. They've supported me and given me tips on how to be a more open person, how to smile all the time and always put on a show for your fans because they're always there to support you."

The standout says as a younger athlete, she would often tense up at practice.

“[Carl] would do this thing, like, he would say, 'shake it out, shake out all the bad thoughts.' Whenever I get tense, I just think about 'shake it out.'"

Once she entered her freshman year at Cypress Springs, Samuels was already a veteran long jumper. But head track coach Ruqayya Gibson, the 2014 Texas Track & Field Coaches Association (TTFCA) Coach of the Year and a Brooks Most Inspiring Coach finalist, helped her realize she could do just as well in the sprints.

“Primarily her thing had been the long jump [before]," said Gibson. “Her dad had been coaching her in the long jump and I think she never had her confidence in the 100m."

In the span of her freshman year, Samuels progressed from 12.4 in the 100m at the beginning of the season to 11.85 by championship time.

“She's done a lot of maturing over the years," Gibson said. “She's a hard worker on the track and she sets a goal and gets after it. She's had to, over the past two years, try to find that balance between the long jump and the sprints and I think this year, it's gonna come together for her where she can excel at both."

Right now, she's well on her way. She picked up the double win at Carl Lewis just one weekend after taking second in the long jump and fifth in the 60m at the Texas A&M High School Indoor Classic.

Lewis interrupted an interview at his namesake meet when he realized the gun was about to start the Girls 60m Dash Finals.

As a member of the University of Houston track and field coaching staff, Lewis is not permitted to comment on a potential prospect.

The 11.85 is still Samuels' personal best for the distance. But this indoor season, she has improved her 60m dash best from 7.66 to 7.61 - which stood as US #13 by the end of the weekend. The decision whether or not to attend New Balance Indoor Nationals at the New York Armory in March is still up in the air. If she does attend, Samuels hopes to improve her indoor marks to 20 feet, five inches in the long jump and 7.5 in the 60m. The long jump mark would place her as the nation's top jumper, while a 7.5 60m would rank US #3.

But her main goals are for the outdoor season, where she hopes to win state titles in the 100m and long jump to help her team win a state title. Cypress Springs moves up to Class 6A competition this year for the first time. She also hopes to represent the United States at the 2015 Pan-American Junior Athletics Championships this summer in Toronto, Canada.

“I would like to dedicate everything I've done - all my accomplishments in the track world - to my dad," Samuels said. “Because if it weren't for him, I wouldn't be as great a track athlete as I am now and I'd also like to dedicate to Evelyn Lewis [née Lawler, Carl's mother and former international hurdler]. She's really helped me know what I want to do in life and helped me know I can do whatever I want to in life."