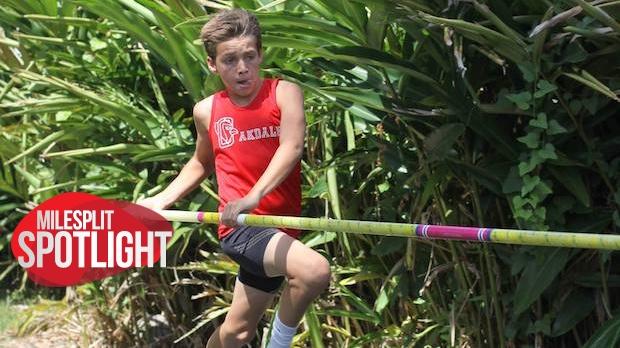 Armand 'Mondo' Duplantis practices pole vault in his backyard during the summer of 2013. (Photo courtesy of Paul James Angelle, Jr.)


Elite athletes excel in their sports with such unfathomable grace that sportswriters are often drawn to the most tiresome of cliches in an attempt to describe the inexplicable.

But Armand Duplantis - he really was born to pole vault. The Lafayette, Louisiana ninth-grader broke the national freshman class record with a clearance of 16 feet, one inch at the LSU High School Classic last Saturday, January 10. The mark currently ranks No. 5 in the nation amongst high school boys.

The jump was Duplantis' first over 16 feet in a sanctioned competition. But it was hardly his first record-setting vault.

“Mondo," as his friends call him - “I think it came from 'Mondo' meaning 'world'… because I broke my first world record and it came with my name" - owned seven age group world records in the event by the time he was 13 years old. 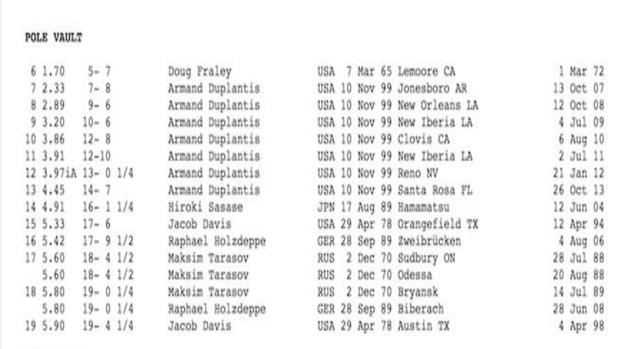 
The youngest Duplantis boy can barely remember the first time he set a world record.

For that matter, he can hardly remember his first vault. Forgive him, he was only four years old at the time.

“He would get a little fiberglass pole and plant it on the ground in the living room and jump on top of the ottoman," his father, Greg Duplantis, said. “Just running and sticking it in the ground and hanging on is not that easy. Usually, you have to be about 10, even 12 years old, to even try. He just took to it real easy."

The attorney twice set the national high school pole vault record while a prep standout at Lafayette High. The first time at 17-10.5, then again at 17-11.75, both in the spring of 1981. He went on to make four Olympic Trials appearances and finished his career with a best of 19 feet and one quarter inch. Mom's no slouch, either - the Swedish-born Helena was a volleyball player and heptathlete at LSU.

Duplantis became close with California vaulter Doug Fraley while competing on the European circuit. Fraley moved to New Orleans in 1990 so the two could train together; he is now entering his fourth season as the Tulane University jumps and multi-events coach and is still close friends with the Duplantis family. Fraley, a three-time NCAA Champion at Fresno State, also started vaulting when he was four years old. His 1.7m (5-7) clearance has stood as the six-year-old age group world record since 1972.

Fraley's father, Bob, Director of Track & Field at Fresno State for the past 28 years, has coached at every level for 50 years in California. For the wunderkind, the track was his playground.

"[On] the subject of play, I think that's the biggest advantage - when you're around it your whole life and you begin to do it at a very young age," Fraley said. "Pole vault is one of those things that the later you start doing it, the more scary it seems. For someone like myself, and in this case, someone like Mondo, it's just part of how he played during the course of a day.

"The big advantage is, it's the most natural thing in the world."

Fraley recalls one afternoon at the Duplantis household when a four-year-old Mondo gestured to a 30-foot rope hanging from a tree in the backyard.

"He said, 'Mr. Fraley, do you think I can climb this rope?' and I said, 'no, you can't climb that rope.' He says, 'See those leaves up there? If I climb that rope and grab a leaf, you have to eat it.' This little four-year-old kid climbs on the rope, gets up and stops. He's tired and having trouble hanging on and I'm like, 'Mondo, come on,' and he's like, 'I'm just joking,' and zooms up the tree. I ate about four leaves that day.

"At that point, I realized there's something different about this kid's wiring because most four-year-olds can't just do that."

In addition to the ropes, Mr. Duplantis installed a pole vault facility in his backyard about 12 years ago that has served as both a playground and classroom for all four of his children, as well as area athletes. The setup includes a raised runway that previously stood at LSU's Carl Maddox Fieldhouse, where the eldest Duplantis son - Andreas - currently vaults for the Tigers.

But Mr. Duplantis hesitates to take much - if any - credit for Mondo's success.

“He's very knowledgeable for a guy his age. He studies the sport and watches videos and knows what he's doing," Mr. Duplantis said. “It's very hands-off, I let him do what he wants to do. I offer little suggestions when he wants them. I'm there as another eye and he wants me to confirm what he's feeling - I'll say 'yay' or 'nay' and he'll adjust."

Mondo does a lot of his studying on YouTube. When he was about 10 years old, he started picking out unique styles of pole vaulting and emulating them in the backyard: Jason Colwick's nearly two-footed take-off, Scott Huffman's western roll, Cornelius Warmerdam's bamboo pole leaps.

“I watch a lot of videos on YouTube and all that to see the different kinds of jumps," Mondo said, “and see that there's not really one style of pole vault that works. It's really your own style."

The 15-year-old described his personal style as “a little bit of Pierre Quinon on the turn-up."

Of course, his favorite vaulter is world record holder Renaud Lavillenie, who cleared 6.16m (20 feet, 2.5 inches) last February to break one of the most storied records in track and field history.


“He's just so good. Everything about his jump. I like to make my jump look like his."


But the the 5-foot-7, 120-pound athlete still has plenty of growing into his own form to do.

“Rounding my plant, I guess, [is something I need to work on]," he said. “Since I'm growing, it's not quite consistent right now. It's hard to control sometimes."

Mondo jumps about three to four times per week in the backyard. The other days, he attends track practice at Lafayette High and completes pole vault drills and some light weights.

Mondo is heading to Reno, Nevada this weekend for the National Pole Vault Summit. The event is a two-day vaulting extravaganza that begins with lectures on Friday and ends with one of the nation's most elite competitions of the year on Saturday.


“I feel good about [the 16-1], but I know it's not really the [fifth-best in the country]. I don't think they've really had that many meets yet. I'm gonna have to jump farther than 16 feet to really be the best in the nation."


Depending on how Mondo does this weekend and the rest of his indoor season, the Louisiana contingent may make a trip out to New York for New Balance Indoor Nationals.


Mondo has certainly proven by now that high pressure situations and big crowds don't scare him.

“[The craziest meet I've been to] I was in Clovis, [California] when I was 10 years old and there were 2,000 people there and on my last attempt I broke the world record for 10-year-olds and that was crazy," he said. “I'm pretty good on last attempts. I know how to control my adrenaline pretty well."

Mondo isn't even the only world record holder in the house - his younger sister, Johanna, owns the age group world records for six-year-olds at 5-4 (1.62m) and seven-year-olds at 6-6 (1.98m). She currently boasts a personal best of 10 feet at 12 years old. The eldest son, Andreas, vaults for LSU with a 17-9.5 best. Middle brother, Antoine or “Twanie," recently committed to play baseball for the Tigers next year, though he has a 14-foot pole vault clearance under his belt. 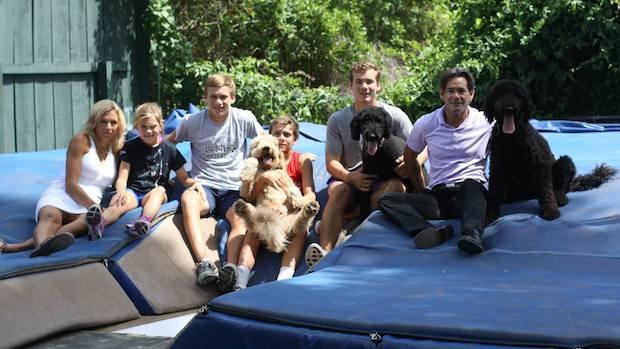 “It's helped Mondo to have so many pole vaulters in Louisiana," Mr. Duplantis said. “Seeing Devin King jump almost 18 feet at state, it's kind of like baseball. The more you see it, the ball kind of slows down... the first time you see it, it blows you away. It's the same thing with pole vault, the more you see people jump high bars, they don't look so high anymore. You say, 'oh, I can do it.' There's so many good pole vaulters in Louisiana that it kind of feeds on itself."


King's mark may have another Louisiana native's name on it before too long.


“Short-term now is break whatever the outdoor record is for freshman," Mondo said.

The outdoor standard is 16 feet, three and one quarter inches, set by Jayson Lavender (Witchita Falls, TX) in 1987.

“And for my whole high school career, I want to have the national record for high school."