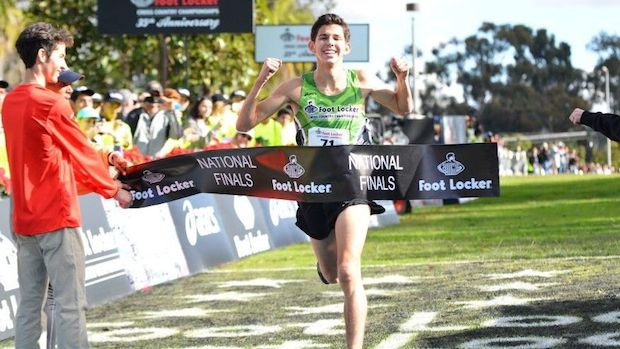 One of Grant Fisher's competitors might have said it best.

"When Grant goes, he definitely goes."

The Michigan middle distance ace needed just one bold move to break apart a Foot Locker boys’ field that had stayed tightly bunched during much of Saturday’s national final. Fisher’s break worked according to plan, getting the Grand Blanc senior to the finish first for the second consecutive year.

“This year our race plan was a little different than last year,” said Fisher, who covered the 3.1 miles in San Diego’s Morley Field in 15 minutes, 3 seconds. “There’s a tree at the top of the hill, and that’s right when you crest it. You turn left around the tree, and that’s where I wanted to make my move.” 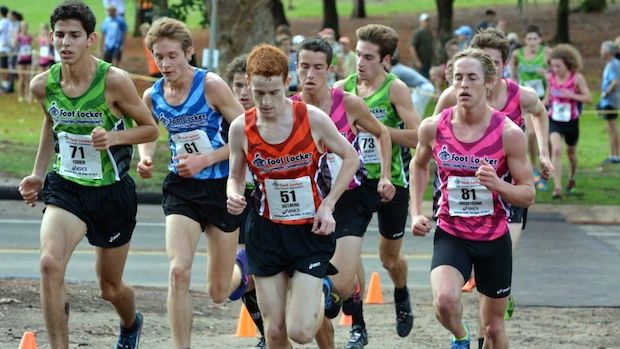 The multitude of last-race contenders existed despite a quick pace on a course softened – and muddied in spots – by steady rain throughout the day Friday. Thomas Pollard of Ames, Iowa, led the pack of 40 through the opening 880 yards in 2:15 and the first mile in 4:42.

“I wasn’t surprised (by the pack) because all of the guys here are so good,” Virginia junior Drew Hunter said. “The pace was pretty quick, we were not going too slow. I looked behind me at one point, and there were 10-15 guys within 1 or 2 seconds. That helped push the pace even more with everyone chasing each other.”

Regional champions Fisher, Hunter, Elijah Armstrong and Alex Ostberg never ventured far from the front on the first lap of the double-loop layout. Connecticut’s Ostberg and Fisher led a group of 10 into the second lap as the pace stayed fast and two miles passed in 9:47. 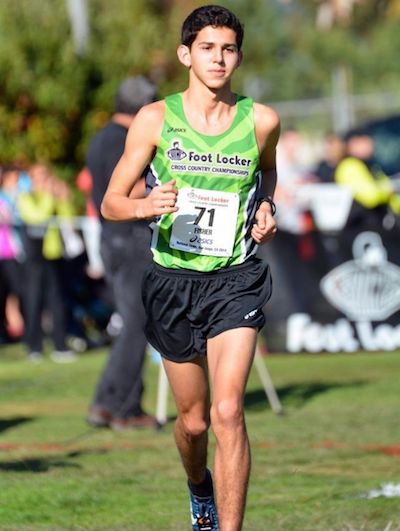 “This year, I was a lot more prepared than last year,” Fisher said. “Last year I think everything worked out exactly in my favor, and I got really lucky.

The second trip up the course’s major hill did nothing to break apart the leaders, and the stage was set for the pre-race favorite and defending champion to determine the 2014 winner.

“My confidence was super high coming into this race,” said Fisher, a Stanford signee. “Even though the guys were I think a lot stronger than last year and a lot higher caliber even though last year was a great race and a great national championship, this year was more difficult.”

And when he passed the designated “go” point, Fisher was able to hit another gear that no one in the field could match and only Hunter tried to duplicate.

“Grant, he is amazing,” said Hunter, who would finish fourth in 15:14. “Props to him. He broke everybody at the top of the hill and kept surging and can run downhill better than anybody so that really helped.

“I tried catching him. I was the only one who made the move, and I think that ended up biting me in the butt. I probably should have just stayed back and tried to run for second, but you know what, I can’t complain.” 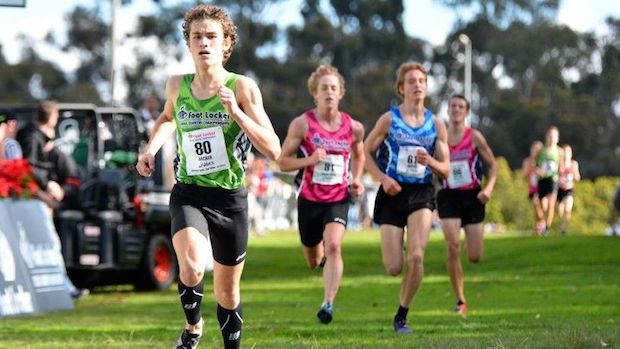 Olin Hacker of Madison, Wis., wrapped up a memorable eight-day stretch with his second runner-up finish at a national XC event, matching his second from the NXN final last Saturday. He closed very strong to reach the line in 15:12.

“It definitely gave me a lot of confidence, and I knew I was in great shape because of last week,” Hacker said. “This is a whole new week with completely new guys, and it was a new race. I wasn’t sure what was going to happen, but I knew I had to stick my nose in there, shake it up.

“I have to thank my coach and my dad for helping me to get here. I definitely trained through (my 10th-place finish at the Midwest regional), but then I peaked at the perfect time. That’s just all my coach and my dad.” Olin's father Tim, got 4th here in 1980 before the name changed to Foot Locker and the national championships was called Kinney. The Hacker duo shared a special moment after the race. Interview with the pair of running Hacker greats. Olin, by just qualifying for Foot Locker, put him and his dad in the history books as the only father/son combo to qualify to Foot Locker/Kinney, let alone the only combo to both go top five. 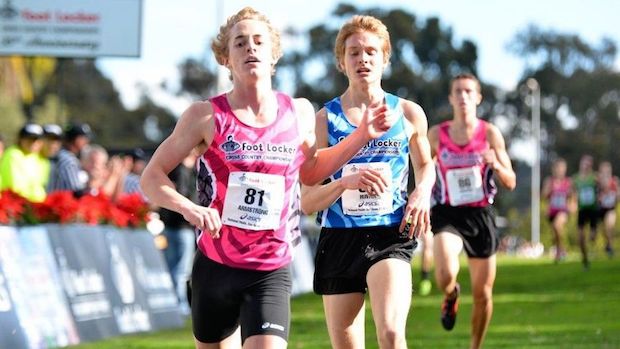 Idaho’s Armstrong was not able to stay with the speed of Fisher, but he did win the race to the line for third, covering the distance in 15:13.

“When Grant goes, he definitely goes, but you always have that little bit of hope in you to go after it and keep driving,” the senior said. 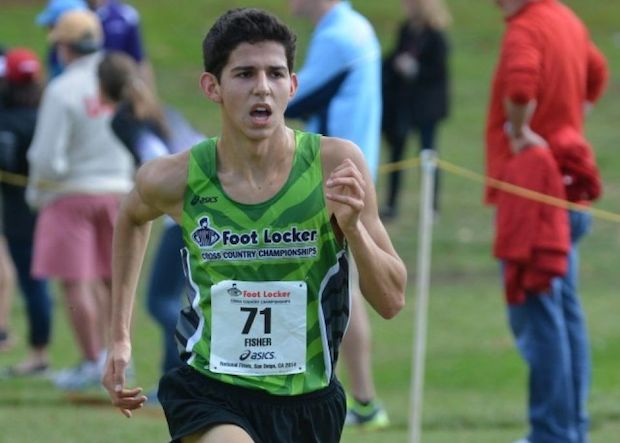 Although his time was four seconds faster than a year ago, Fisher stressed that there might have been more speed left in his legs at race end.

“Running fast on courses has not really been something I have focused on,” the victor said. “I’ve always been gunning for the places, especially for cross country with the different courses and conditions. Time isn’t as good of a gauge as places, it is in track but not so much in cross. Actually today was some of the best conditions I have raced in all year.

“No matter what the time was, if I ran 17 minutes today and pulled it off, I’d still be really happy. Although the time was a bit improved, I don’t think it’s 100 percent reflective of my fitness right now. It would be fun to time trial right now just to figure out what kind of shape I’m in and do it with these guys on the track.”