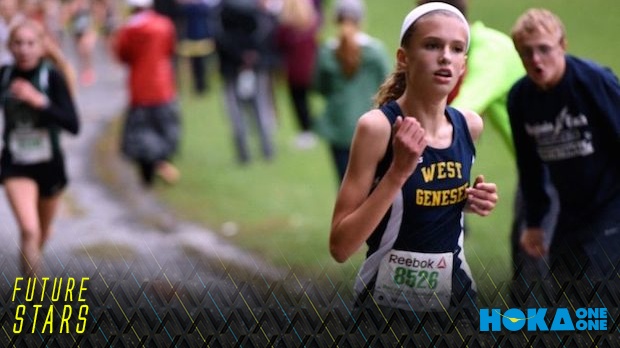 After running a 5:12 mile and even more eye opener 2:14 in the 800 as the 8th grader, it was only natural to expect Carly Benson of West Genesee (NY) to show herself this fall as one of the country's top freshmen cross country runners. In of the country's best meets in the Manhattan Invitational three weekends ago, Benson finished 3rd in the Eastern States division race with an impressive run of 14:32 on the Van Cortland Park 2.5 mile course. With two invitational wins this season as well as a fifth place showing at the McQuaid Invite, Benson aims to be make a big debut at the New York State Cross Country Meet in two weeks.

Each month, MileSplit will be selecting 21 freshmen girls as part of the Future Stars of XC Team presented by Hoka One One building into the end of the year team to be finalized in early December. Check out the 21 top freshmen girls XC performers nationally from the month of October below split into a first, second, and third team of Future Stars.