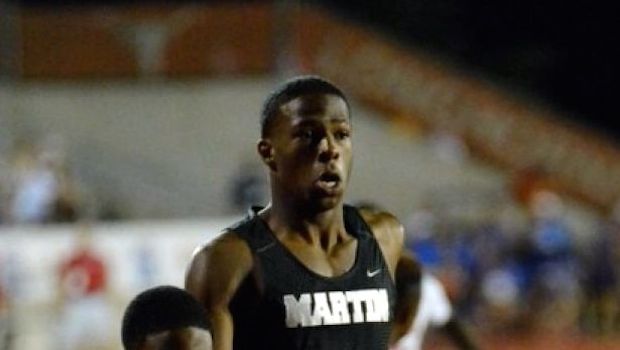 Outstanding times from the finals of the 400 meter dash highlighted the final day of competition in Des Moines. In the 15-16 age group boys 400 finals, two of the nation's top 10 times of the outdoor season were posted by AAU champ Keshun Reed of Texas in a US #5 clocking of 46.45 to finish ahead of 400 meter hurdles champ Quincy Hall of Missouri in second place at US #9 time of 46.71.

In the girls finals for the 17-18 age group, Brittny Ellis from Gurnee, Illinois defeated a current US top 10 performer and All-American in Anna Jefferson of Michigan to win in a personal best and US #8 performance of 53.49.

A thrilling dead heat finish between Andrew Hudson of Texas and Jayveon Taylor of Nevada with both runners timed at 10.55 in the 17-18 age group boys 100 dash finals had to require the timers to look much closer to find the AAU champ between the two going to the thousandths of a second to give Hudson to the nod as the winner.

The fastest winning time among the girls 100 meter finals came in the 15-16 age group with Symone Mason of Miami, Florida motoring down the straightaway at Drake University to a swift 11.82 victory. Sekayi Bracey from Grand Rapids, Michigan also went under 12 seconds to earn her AAU national title for the 17-18 age group in a 11.93 clocking.

Two of the best distance runners from the homestate of Iowa cleaned up the morning races for the 17-18 age group division in the 3,000 meter runner with Griswold's Rebekah Topham earning her second gold medal of the week (1500 winner earlier) with a 10:30 winning time, while Boone's Albert Meier has run sub 9 minutes for 3200 meters, but simply ran hard enough to win the 3K at AAU JO's in a time of 8:52. 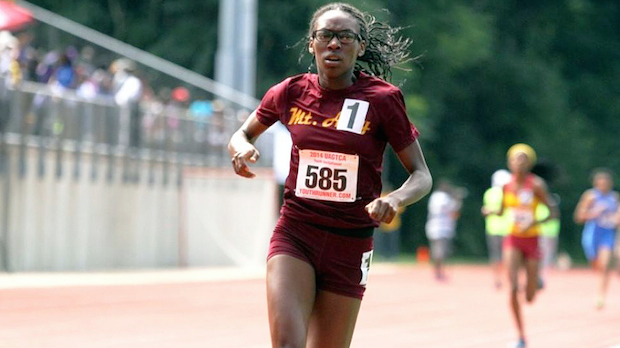 Gabrielle Wilkinson, a rising 9th grader of Friends Central School from Philadelphia, Pennsylvania, had an impressive double at the AAU Junior Olympic Games in the girls 15-16 age group with a PR of 2:09 in the open and then came back to win the 1500 in a new meet record time of 4:32. She broke Ajee Wilson's meet record in the 1500 and was not too far off Wilson's record in the 800. (Photo by Patty Morgan)

World Juniors shot put finalist Amir Ali Patterson did not shut it down after last week in Eugene and kept throwing this week into the AAU Junior Olympics. Patterson had a great week of marks in Iowa with a personal best of 66'2" in the shot and 183'0" in the discus as a double AAU champion for the 17-18 age group boys for the incoming UCLA freshmen.

In a very competitive finals of the 17-18 age group boys 800, John Lewis from Cheltenham, Pennsylvania was able to pull away from top prelims qualifiers Ty Moss (2nd, 1:50.52) of Illinois and Vincent Crisp (3rd, 1:50.99) of North Carolina for the AAU national title. It was a remarkable PR over 3 seconds for the rising senior Moss, who focused primarily on the open 400 during the season with a 47.69 season best.

For the 15-16 age group boys 800 finals, a new AAU national record was set by Terrell Jackson of Memphis, Tennessee. Jackson took down a 4 year old record with his 3 second margin of victory and 1:51.53 run from the Tennessee state 800 meter runner-up attending Memphis University School. Jackson was a double AAU champion for the week with another first place finish in the 1500 meter run as well with a time of 4:03.05, which is impressive range for someone who ran a 11.90 100 and 23.01 200 as well during his school season.

Only an 8th grader, Gabrielle Wilkinson ran her first of likely many future sub 2:10's in the 800 as the native of Philadelphia was a runaway champion for the 15-16 age group girls by 7 seconds. Wilkinson posted a winning time of 2:09.72 at AAU JO's, which is one of the faster times in meet history for the group with the meet record being a 2:07.08 by current professional runner Ajee Wilson in the 2009 AAU Junior Olympic Games. While Wilkinson got the PR and win in the 800, but not the meet record, the 1500 meter run saw her get all three as she broke Wilson's 4:34.51 meet record for the 15-16 age group in a time of 4:32.59. She had no competition to push her to the record breaking performance with a 16 seconds buffer between herself and the runner-up finisher.

Coming out of Queens, New York, Shaniqua Kirkpatrick found herself in a four way battle down to the wire in the 17-18 age group women's 800 finals with Ruby Stauber (MN), Kodii Church (TX), and Rebekah Topham (IA). Kirkpatrick, a rising senior at Benjamin Cardozo who nearly broke 3 minutes indoors in the 1000, dropped a 3 second PR to win the AAU title in 2:10.60.

Kirkpatrick and Topham (who finished 4th in 2:11.97 in the 800 finals) saw each other again in the women's 1500 with the Griswold High School (IA) rising senior Topham getting the win in that event with a time of 4:38.15 in a decisive runaway victory with Kirkpatrick trailing in 7 seconds later for second place in 4:45.21.

Chad Zallow, a state champion hurdler from the state of Ohio, has had a very productive summer. After winning the USATF Youth title last month in Indianapolis in the 110 meter hurdles, JFK Warren High School's Zallow also claimed an AAU national title this week in Des Moines matching his personal best with a 13.93 clocking.

Wisconsin state champion hurdler Danielle Riggins of Kenosha Tremper High School ran just off her US top 10 PR in the 100 meter hurdles with a dominant 13.69 effort in the finals at AAU JO's leading three other finalists under 14 seconds in the 17-18 age group for girls. One of those four girls under 14 seconds in the 100 hurdles finals earlier had won the 400 meter hurdles title in Sierra Brabham-Lawrence from Harrisonburg, Pennsylvania with a US #7 performance of 59.68.

Rhesa Foster won a pair of AAU national titles in the 17-18 age group for women with the Clovis, CA native leaping for a wind legal mark of 20'0.25" in the long jump, while rolling in the 100 meter hurdles finals to a 14.06 victory from the Clovis North High School rising junior.

In the 15-16 age group for the boys 400 meter hurdles, Quincy Hall from Missouri posted a US top 10 time in the event with a 52.19 performance to claim an AAU title in dominant fashion by two seconds in one of the toughest races on the track.

The Cunningham household made it a sweep of AAU titles over the week with big brother Randall Cunningham Jr. following in the footsteps of little sister Vashti (15-16 age group champ earlier in the week) by taking first in the 17-18 age group boys high jump with a clearance of 7 feet for the Bishop Gorman High School (NV) state champion high jumper.

Florida state champion high jumper Stacey Destin of Santalucas High School maintained her consistent junior year of clearances in the high jump by claiming the AAU title for 17-18 age group women with her 9th clearance of 5'10" for the 2014 outdoor season. 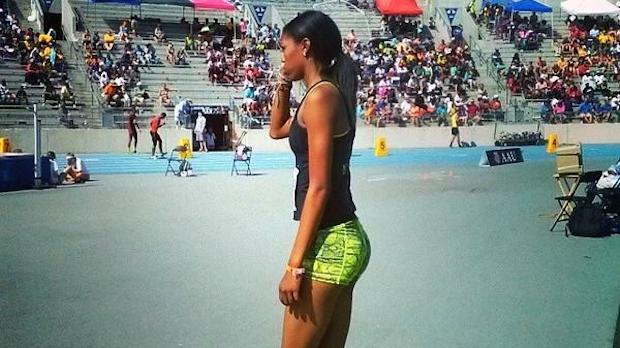 US #1 ranked Vashti Cunningham won the 15-16 year old age group title at the AAU Junior Olympic Games on Monday at Drake University in Des Moines, Iowa with a meet record clearance height of 6'1" from the Bishop Gorman High School (NV) rising junior. She could have possibly competed for a medal for Team USA last week at World Juniors, but elected to not try out for the team at US Junior Nationals. Nonetheless, Cunningham just completed one of the best high school seasons all-time in the high jump and has two more years of high school to challenge the national record in the event and potentially compete for future US teams in international competition.

AAU national titles in the multi-events earlier in the week went to Anna Govero (17-18 age group girls) from Clinton, Mississippi with 4,865 points and Tyra Gittens (15-16 age group girls) from Nashville, Tennessee with 4,934 points in the women's heptathlon. Meanwhile for the men's decathlon champions, Christian Friis of Santa Rosa Beach, Florida had the highest tally for the 17-18 year old boys at 6,276 points and Antuane Dennard of Lawrenceville, Georgia posted a winning score of 5,860 points for the 15-16 year old boys.

US high school girls national leader and Iowa state champ Kiana Phelps delivered for the home state crowd in the 17-18 age group girls discus as she won the competition with a throw of 147'2" to out perform two throwers from the state of Texas including a solid challenge from Chyna Otis (2nd, 140'3").

Only a quarter inch separated first from second place in the women's long jump for 17-18 year olds with Taylor Deloach of Savannah, Georgia just outperforming Haley Patterson from Fort Worth, Texas with her mark of 19'1.75" compared to Patterson's runner-up leap of 19'1.50".

Very quick times were posted by the top qualifiers in the 17-18 age group boys prelims in several events including Jayveon Taylor of Las Vegas, Nevada rolling to a sub 21 seconds time in the first round of 200 meter dash with a 20.90 clocking, while Ty Moss of Plainfield, Illinois and Vincent Crisp of Charlotte, North Carolina nearly matched each other's 1:51 opening performances from separate heats of the 17-18 age group for the boys 800 prelims.

Symone Mason of Miami, Florida looks to be the speediest girl in the meet for the 15-16 age group girls after swiftly breezing through the first round of the 100 and 200 meter dashes as the top qualifier with times of 11.73 and 24.33 respectively.

One of the better individual performances so far from the 15-16 age group division for girls was performed by Chanel Brissett of Wyncote, Pennsylvania who nearly went under 14 seconds in just the trials of the 100 meter hurdles with a 14.04. Brissett should get a strong challenge in the next rounds and finals though from Rhesa Foster of Clovis, California who posted a quick prelims time as well at 14.15.

Pennsylania girls hurdlers continued to impress in the older age group with the top qualifier for the 17-18 year old girls in the 100 hurdles prelims came from Harrisburg, Pennsylvania in the form of Sierra Brabham-Lawrence, who blazed through her first race in Des Moines with a 13.73 clocking.

Five girls ran under 12 seconds in just the prelims of the 17-18 age group girls 100 meter dash led by Sekayi Bracey of Grand Rapids, Michigan as the fastest qualifier in 11.81, but another Midwest sprinter appeared just as fast out of the gate in Danielle Riggins (11.86) from Milwaukee, Wisconsin.

Both Benjamin Johnson of Nashville, Tennessee and Barlett Ferronte' of Cincinatti, Ohio were able to achieve quality wind-legal mark and victories in the horizontal jumps for 17-18 year old age group boys with Johnson extending out for a mark of 23'8.25" in the long jump , while Ferronte' was over two feet better than the competition at 47'2" for the meet in the triple jump.

More highlights and updates to come throughout the rest of the week on high school athletes competing at the 2014 AAU Junior Olympic Games in Des Moines.