Preview of the men's and women's 400 meter hurdles for the 2014 USATF Junior National Outdoor Track & Field Championships, a qualifier for the IAAF World Junior Championships to be held later this month back at Hayward Field in Eugene. 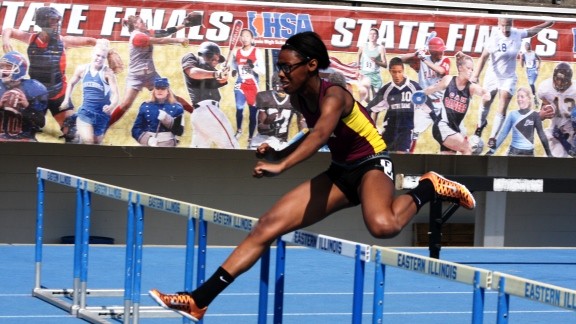 In the women's 400 meter hurdles, Shamier Little of Texas A&M comes in as the favorite after having running a best of 55.07 in freshmen year at College Station while claiming the NCAA Division 1 title as well in her last trip to Hayward Field. The high school talent is impressive and loaded this event, but it would be a shocker to say the least if one of them was able to defeat Little for the US Junior Nationals title. The NCAA champ Little has made remarkable improvements from her senior year. While a state champion in high school in Illinois in several events, Little had a high school 300 meter hurdles best of 42.29 and her current 400 meter hurdles best time in college would translate to something much faster now at the 300 meter distance. 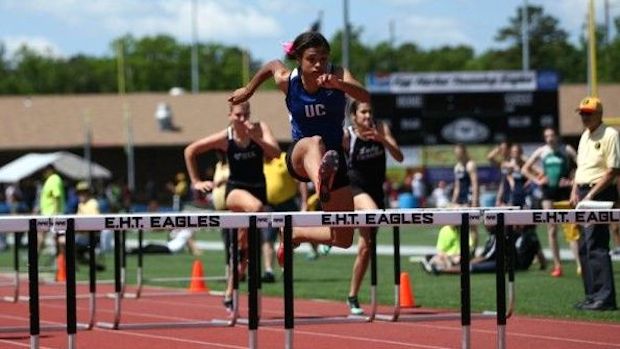 Speaking of that group of high school hurdlers, this event is getting the best of the best that we could have possibly gotten. New Balance Natioanls 400 meter hurdles champion and national freshmen class record holder Sydney McLaughlin of Union Catholic in New Jersey will looking to make her first of what we assume will be many future US teams in international competition. Only a 14 year old, McLaughlin was not held back by her age or class to rise to become of the nation's best prep hurdlers this spring finishing with a 56.89 victory in the 400 meter hurdles in the New Balance Nationals, while nearly picking up a second national title in the 100 meter hurdles with a runner-up PR clocking of 13.34. 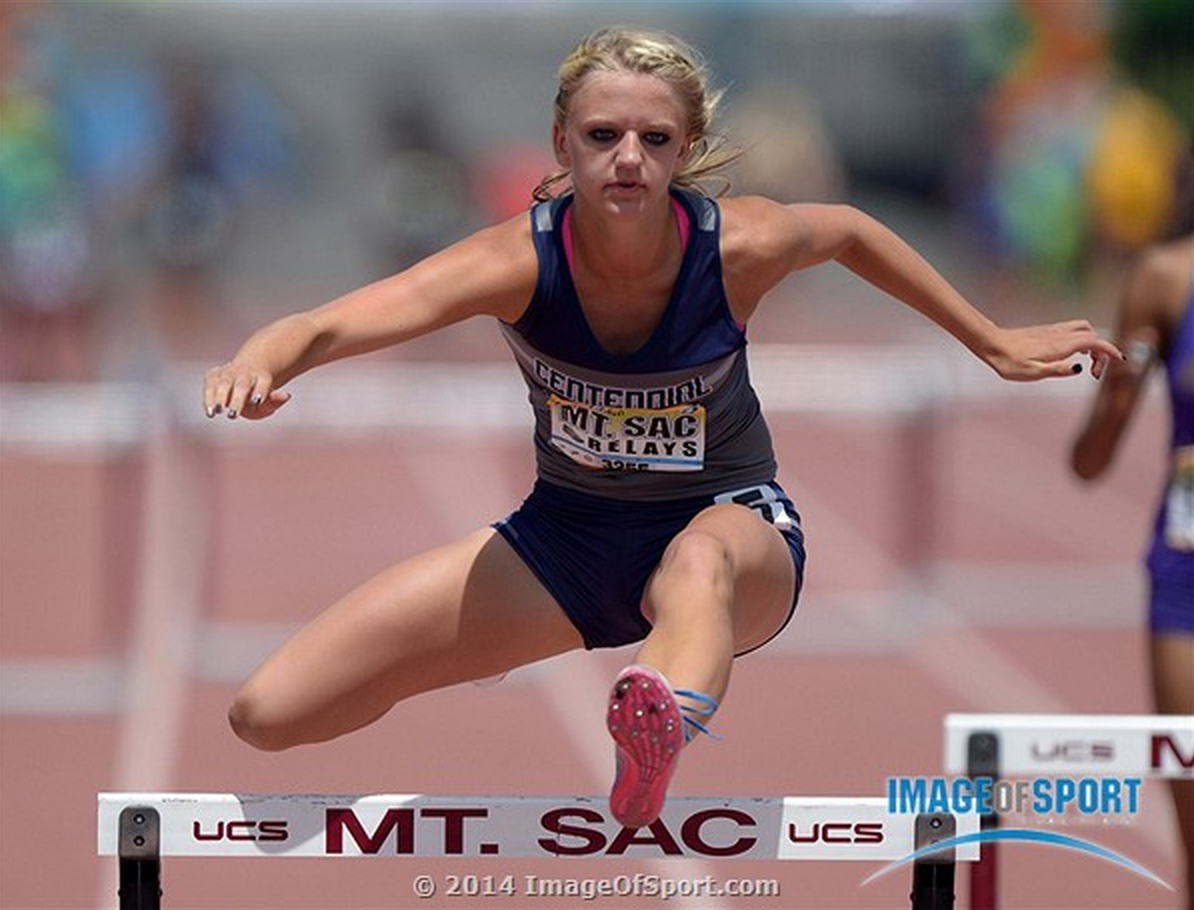 They tied for the US leading time in the 300 meter hurdles on the same day, but at different meets when Centennial (NV) senior Tiana Bonds won the Great Southwest Classic in 40.91 and then later in the evening, Piedmont Hills (CA) freshmen Reonna Collier won the the CIF State Finals title in the event with an identical time of 40.91. How about we have them run 100 meters more with hurdles at USATF Junior Nationals as the tiebreaker? Neither has had the opportunity to run the 400 meter hurdles this season, so it will be interesting to see how their times transfer over from the 300 meter hurdles to this event after having not run a 400 meter hurdles race at all this spring. 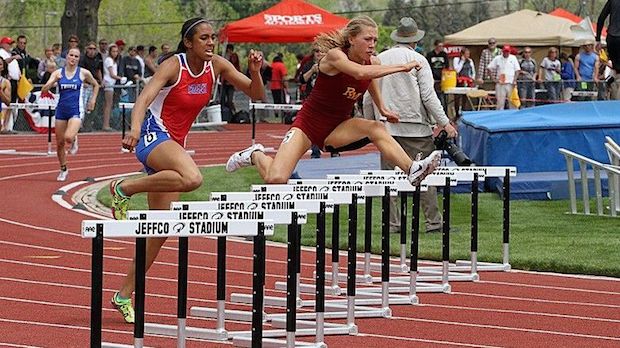 Another outstanding 300 meter hurdler in the same boat is Colorado state champion and state record holder Carly Lester, who rolled a swift US #4 time of 41.18 in elevation at her state championship meet in early May. Lester is only a junior from Rocky Mountain High School. Other collegiate hurdlers who could challenge for the two spots on the World Junior team are Harvard's Jade Miller with a 57.21 season best and LSU's Bryiana Richardson at 58.63. Next fastest high schooler after McLaughlin with a 400 meter hurdle time on her is New York state champion Emma Gallagher of Garden City, who was a runner-up at the New Balance Nationals to McLaughlin in a US #2 performance of 58.87 for the junior.

Between Trayvon Bromell and Timothy Holmes, Baylor University has struck gold this past year plucking talent away from the state of Florida and finding two athletes who were ready to make instant impacts to their program. Bromell won the NCAA title in the 100 meter dash, while Holmes earned All-American honors with a 4th place finish in the finals of the men's 400 meter hurdles and finished the year with a 49.90 personal best in the event from the regional qualifier meet. Holmes, who was a Florida state high school champion a year ago including a 37.06 best in the 300 meter hurdles, will be a solid favorite in the event. Like the women's 400 meter hurdles though, this field is littered with a great depth of talent. 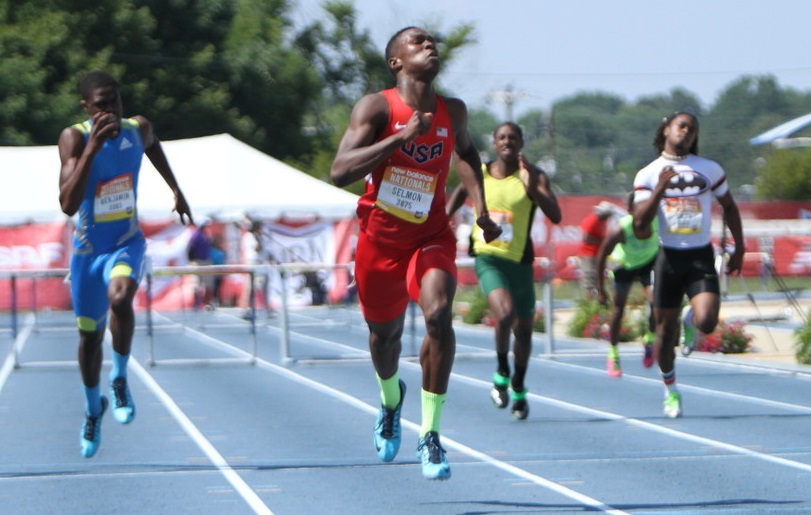 Kenny Selmon leads the group of high school entrants as a bronze medalist last summer in the World Youth Championships in Ukraine and also the recent New Balance Nationals 400 meter hurdles champion in the event. From Pace Academy in Georgia and headed to the University of North Carolina at summer's end, Selmon owns the nation's fastest time in the event with his 50.48 victory at the New Balance Nationals. Selmon is looking to great a newer and fresher Team USA singlet to wear to go with his one from last summer by finishing among the top 2 in Sunday's final. 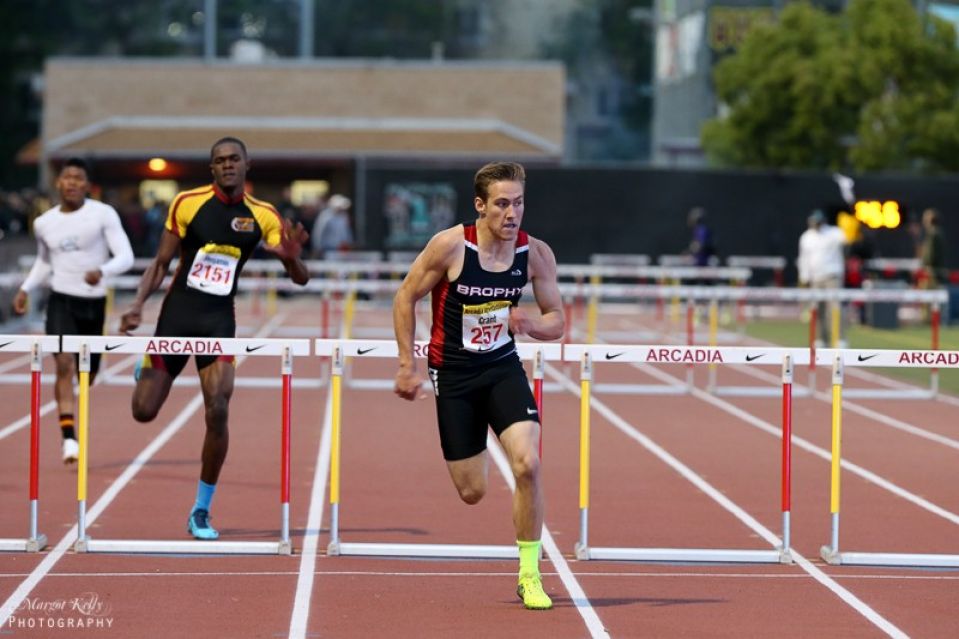 A pack of collegiates act as a buffer between Selmon and the next fastest high school competitor in the field in Arizona state champ Robert Grant, who is also headed to an ACC school in the coming year at the University of Miami. Grant was one of the nation's leaders throughout the year in the 300 meter hurdles with a 36.24 season best and finished as a national runner-up to Selmon at the New Balance Nationals in his first 400 meter hurdles race of the season with a 51.16 personal best performance. Last summer, Grant was teammates with Selmon on the World Youth Championships and made the finals with him, but just missed out on a medal in fourth place. 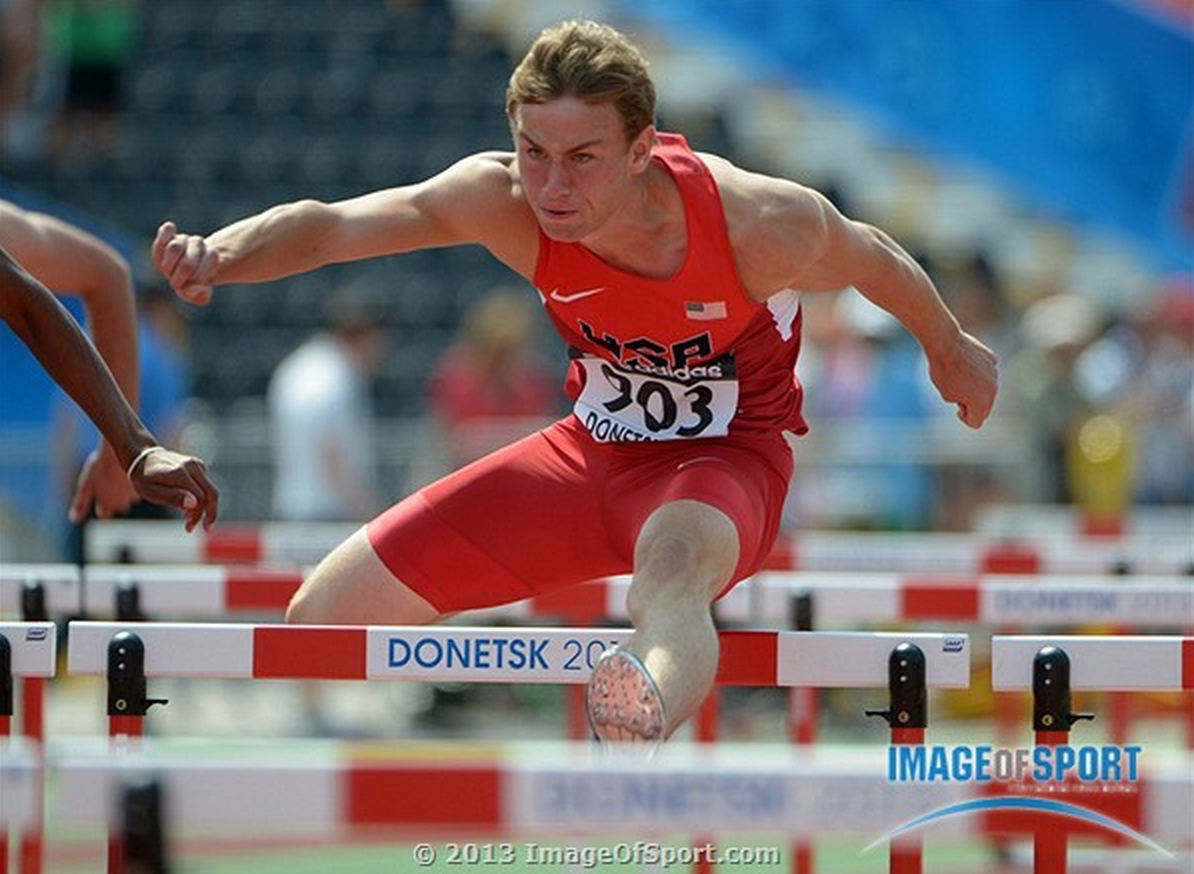 Standing in the way for Grant to make the USA team will be Selmon and a crop of collegiate hurdles including two who have already went under 51 seconds this season in Khallifah Rosser (50.71) of Chaffey College in California and Desmond Palmer (50.73) from the University of Pittsburgh. Another 2013 World Youth Championships qualifier is also in the mix for the 2014 World Junior team in John Lint from Columbus Academy in Ohio. Lint made the US team last summer in the 110 meter hurdles, but showed this spring in running a US #3 time of 36.32 in the 300 meter hurdles at the Ohio State Meet that he is just as capable in the longer event.