Recap of the championship boys distance races from the 2014 New Balance Nationals Outdoor. 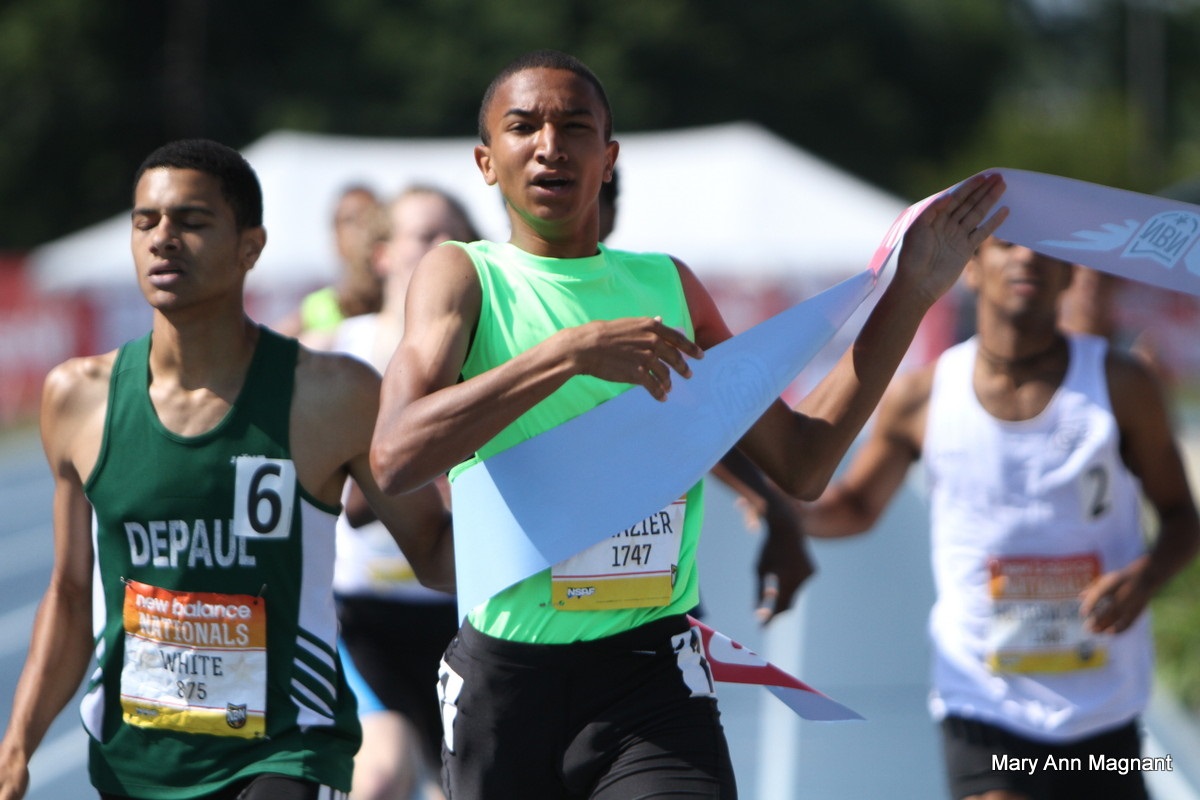 It looked to be a possible repeat of the indoor nationals all over again for Lafayette's Derek Holdsworth of Virginia as the New Balance Nationals indoor 800 meter champ took charge early on with the pace setting duties and bringing the field through 53 seconds in the first 400. Recent New Jersey Meet of Champions record breaker Ishmael Muhammad was helping push Holdsworth running right on his heels through the first 600 meters, but in the last 200, suddenly the whole field had reached them with a thriller rolling off the final turn to determine the outdoor champion in the 800.

Five guys ended up running PR's under 1:50, but it would be Grand Rapids Kenowa Hills junior Donovan Brazier having the best gear shift in the final 100 meters to claim victory in a US #3 time of 1:48.61. Brazier had just knocked two seconds off his previous PR in the 800 in claiming the Michigan D1 state title two weeks ago in 1:50.24, but has dropped nearly four full seconds in his top time for the 800 in less than a month's time.

The track at North Carolina A&T University must be a favorite track for Joe White of DePaul Catholic (NJ) as he seems to always run his best races of the season on it with the New Jersey Meet of Champions runner-up grabbing second place with a 1:48.75 effort. Last year at the New Balance Nationals, White ran a PR of 1:50 for fifth place All-American honors, which he had struggled to beat that time this year until the New Jersey Meet of Champions put him back on track in time for the national race. 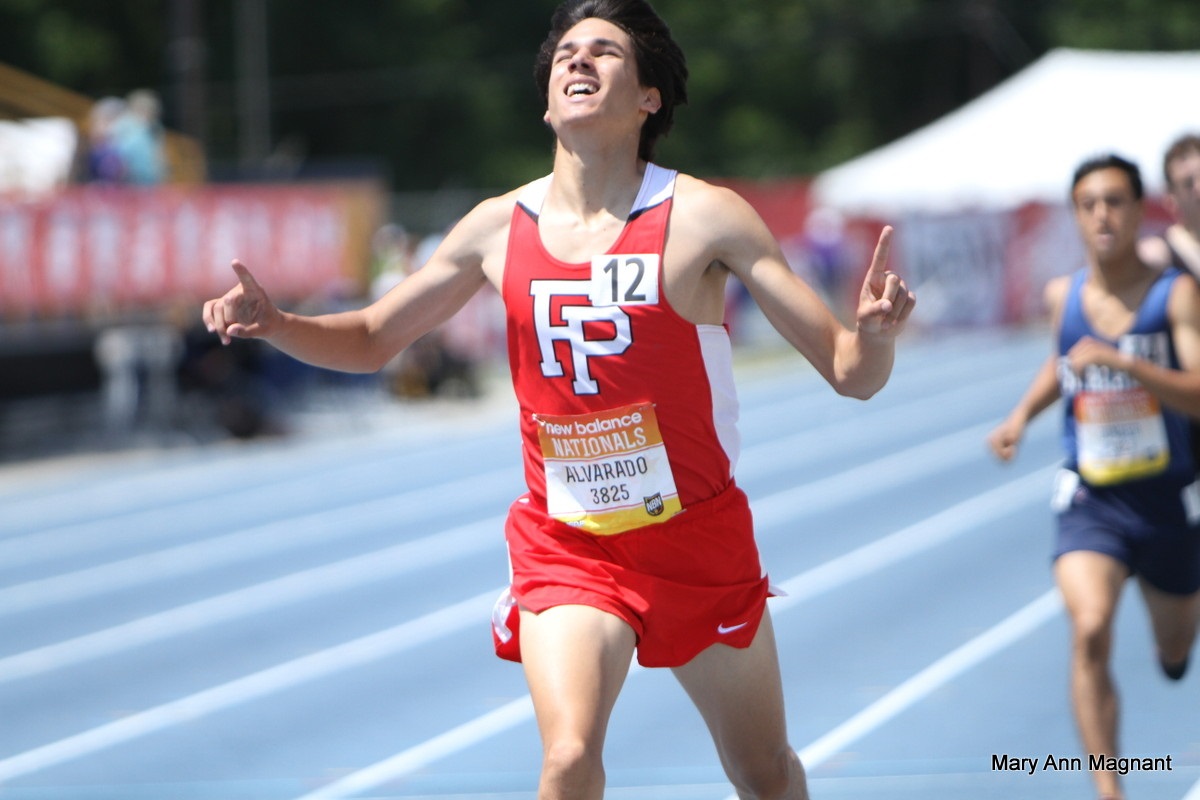 Christian Alvarado from Fairfield Prep in Connecticut had a couple of disappointing memories and experiences in national championship meets prior to this weekend, but he erased them all with one great performance to finish his high school career on a high note. Running from the unseeded section of the boys mile at the New Balance Nationals earlier on Sunday afternoon, the recent CIAC open state champion in the 1600 and 3200 meter run, Alvarado led wire to wire (but pressed by a strong second fastest field including eventual overall runner-up Tai Dinger of St. Alban's School in DC) with a torrid pace in the North Carolina humid heat to run a lifetime best of 4:06.88 for the mile.

A PR by 7 seconds for the senior Alvarado, the bar was set too high for the faster seeded section later on to measure up to Alvarado's performance with Patrick Gregory from Butler High School in Kentucky ending up taking the win in that section with a time of 4:08.62 to finish behind both Alvarado and Dinger in the final compiled results. While the adidas Dream Mile may have watered down the quality of the field up front, the depth was still certainly there with many runners dipped under 4:10 for the first time including three juniors at 4:09 in Matthew Novak of Deep Run (VA) in 6th place, Benito Muniz of Carmel (NY) in 7th place, and Olin Hacker of Madison West (WI) in 8th place. 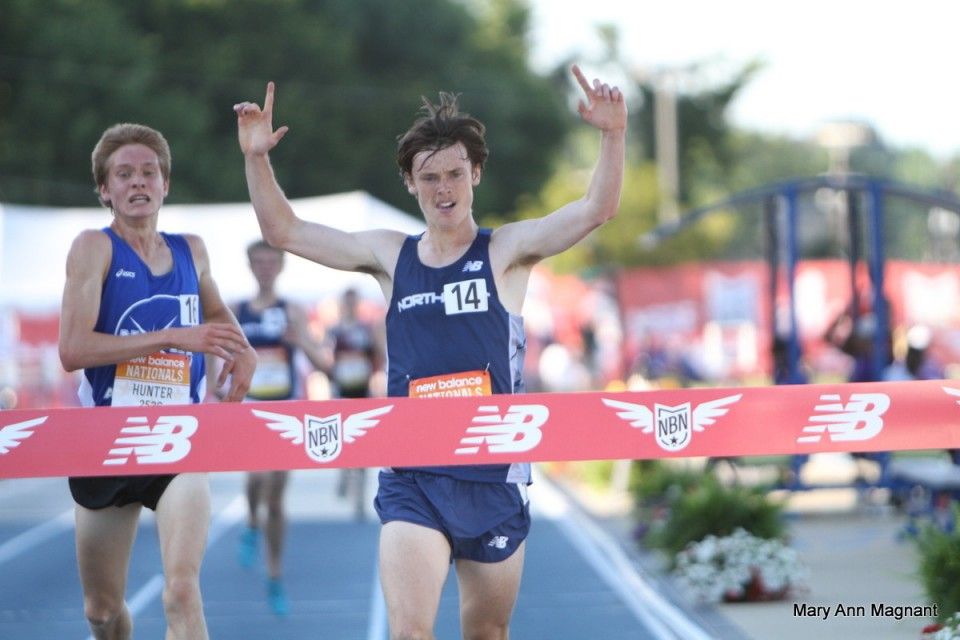 Three guys from the same time under 9 minutes in the same two mile race? Never been done. Well venturing into areas where track & field statisticians and historians do not bother to think to collect stats on, but we have pretty good confidence in claiming that the Northport boys of New York with junior Mike Brannigan and senior brothers Tim Mcgowan and Jack McGowan achieved something on Saturday night in Greensboro which has never been in US high school history. There was clearly the potential for the collective achievement to happen at the outdoor nationals given the times already run this year by the trio from Northport.

Iowa state champ Thomas Pollard did most of the pacing for the field during the majority of the race splliting the mile mark at 4:27. Northport junior Mikey Brannigan found his way near the front by the bell and then made his drive for the win coming off the final turn, but also found Penn Relays 3K champ Andrew Hunter of Loudoun Valley (VA) having the same idea. Brannigan was able to hold off a fast charging Hunter in the final strides to win his first national title in a time of 8:53.59. Hunter, who set the sophomore national class record in the 3K at the Penn Relays, has certainly made a leap this season to make him considered one of the top young returning distance runers for the fall.

For the race winner Brannigan, not only could he celebrate a first in an individual national title, but as he turned back after crossing the finish line, he could find two extra reasons to celebate with his teammates in McGowan brothers also earning All-American honors with 3rd and 4th place finishes breaking 9 minutes flat in the same race as him. It would not be the last time the three runners from Northport would be celebrating nationals glory over the weekend. 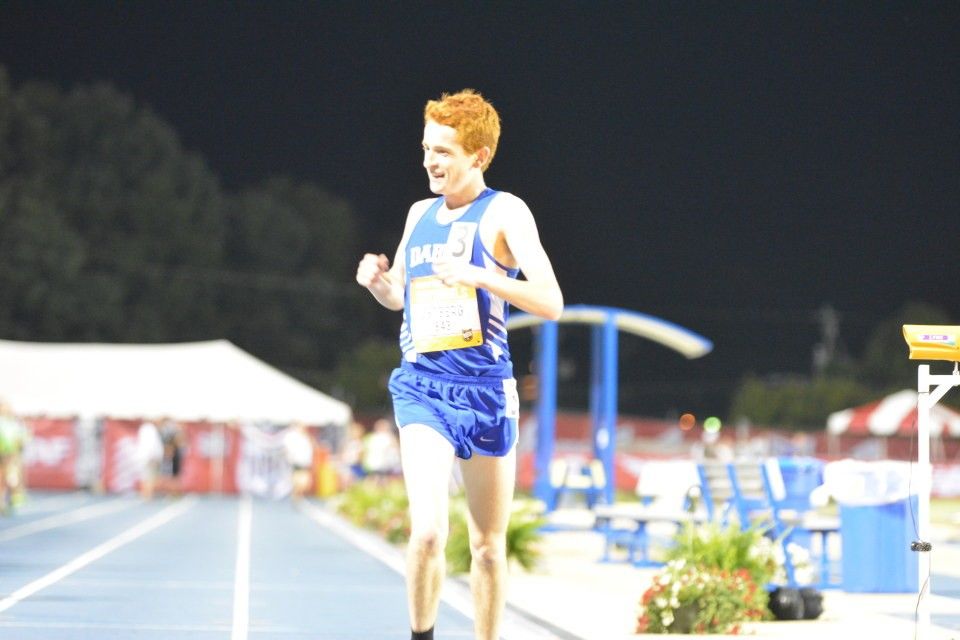 Alex Ostberg sacrificed a lot of individual success this past Monday when competed in three events at the Connecticut State Open meet. He was rewarded for possibly not the times or finishes that he wanted in the 1600 and 3200 at that meet with his Darien High School squad able to tally enough points to win the state team title. Only a few days on Friday at the New Balance Nationals in North Carolina, his teammates and coaches returned the favor in support. With a solid crew of fans in teammates, coaches, and family present, the junior Ostberg was able to make a break mid-way thru from the championship boys 5K field with only 2013 New Balance Nationals Indoor 5K champion Elijah Armstrong of Idaho able to stick with him.

Ostberg continued to grind the pace far enough out from the finish to shake Armstrong and ultimately able to earn his first national title with a 52 second PR drop in a new current US #1 time of 4:16. A 11th place finish at the Foot Locker Nationals in San Diego this past December was Ostberg's prevoius best race to date, but claiming the New Balance Nationals 5K title now has to bump that Foot Locker Nationals race to #2 on his all-time best races. His performance at North Carolina A&T should come as very little suprise considering his other top performances of the spring including a runner-up 8:52 3200 meter race at the Loucks Games and taking 3rd place in the Penn Relays 3K.

Despite falling off from Ostberg, Elijah Armstrong was still able to hold onto a solid pace over the last few laps and withstand a late challenge from Zach Dale (3rd, 14:29.95) of Conant High School in Illinois for him to just miss his 5K personal best by a mere second from last year's race for the Idaho state champ. A total of 15 guys in an impressive display of depth went unde 15 minutes. 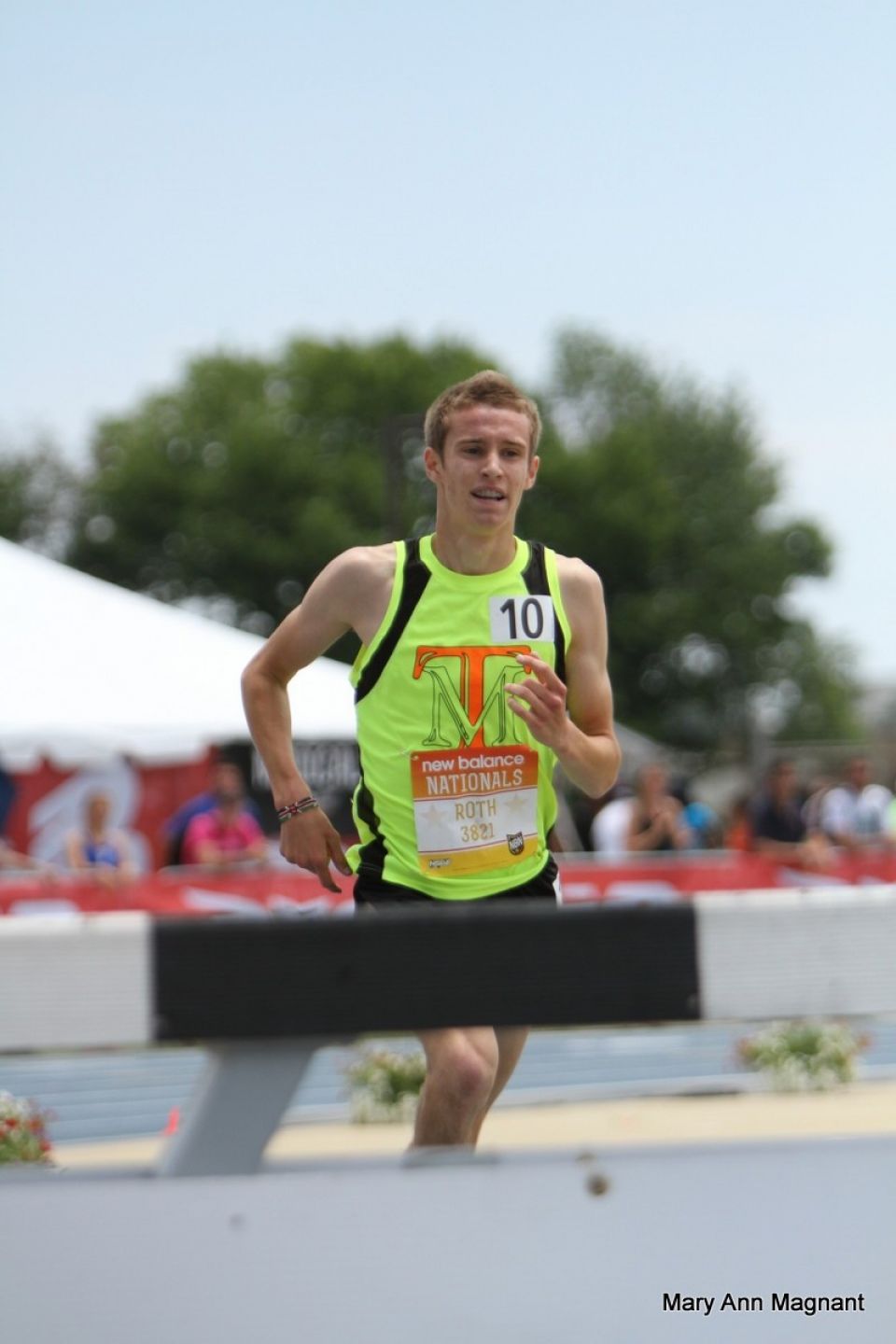 Leave it to Bailey Roth to be the only distance winner in the entire meet to set a national record in his event. An event dominated by the state of New York and also having a national record which lasted over two decades, the Colorado steepler Roth did not need much practice or races to be in top form on Saturday. A World Youth Championships qualifier for Team USA last summer and making the finals of the event in Ukraine, Roth stayed ahead and clear of the field from the first water jump till the very end to win with easily the top time in the country. No race rust for someone who had not raced in the steeplechase since last summer, since Roth can rarely find high school meets with steeplechase back in his homestate of Colorado.

Roth's outdoor season highlights included a 9:18 3200 to win a Colorado state title, but is still looking to improve upon his 1600 and 1500 meter times from a year ago. Another US team facing  international competition at the World Juniors will likely be more on the mind and radar for Roth after his first experience at that level in earning a Team USA spot last summer for World Youths. Joining him under 6 minutes at the 2K steeple distance was a trio of New Yorkers in Hilton's Tyler Ranke (2nd, 5:51), Corning's John McCarthy (3rd, 5:55), and Monroe-Woodburry's Jack Jibbs (4th, 5:57.24).

More recaps and stories to come from the 2014 New Balance Nationals!