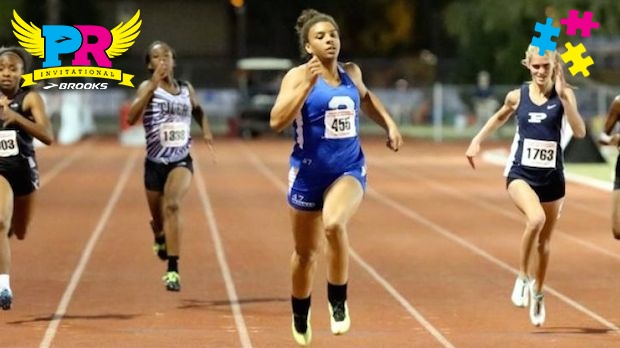 Another piece to the Brooks PR puzzle is Chandler High School sprinter Ky Westbrook. Westbrook, a University of Southern California signee, is an eleven time Arizona state champion. In 2014, she claimed four golds winning the 110 meter hurdles, 100 and 200 meter dash, as well as the shot put. She is the 2013 Adidas Dream 100 champion and IAAF World Youth Champion She was third in the Dream 100 this past weekend in New York City. Westbrook will compete in the 100 meter dash and brings with her a personal best of 11.33 to the Brooks PR Invitational on Saturday, June 21st in Seattle.

When did you first learn that you were invited to the Brooks PR Invite and how did your react?
Westbrook: I found out at school when my coach told me. I was excited because I have never been invited to Brooks before.
What does it mean to you to be invited to the Brooks PR Invitational?
Westbrook: It means a lot because I had heard of the meet, but had never been invited to it. It is exciting to be able to experience the meet my senior year.
What do you hope to achieve at the meet?
Westbrook: I want to PR, always.
What music do you listen to before races?
Westbrook: I listen to a lot of different types of music. Usually whatever I am feeling that day.
If you were stranded on an island with three things what would they be?
Westbrook: I would want family, friends, and mac and cheese. That’s all I need in this world!
What would you consider as your best or most favorite race of all-time and why?
Westbrook:  The World Youth Championships in Ukraine last summer was my favorite race.  It was such a huge experience and I won with a PR.
What are some things un-running related people might not know about you?
Westbrook: I was a competitive gymnast and was a state champion.
How and why did you get involved in the sport?
Westbrook: I started running track at the Hershey meet when I was nine. My parents always had me entered in different sports. Track just always stuck and I had some early success so I was motivated to keep running!
How has your training been leading up to the meet?
Westbrook: It has been touch and go. I have been dealing with nagging injuries all season. However, I have worked on a lot of strength and core exercises to prepare myself for this summer.
What are you most looking forward about your trip, race and weekend at the Brooks PR Invitational in Seattle?
Westbrook: I always look forward to seeing my friends that I have met across the country that will be there and of course meeting new ones. We only see each other a few times a year at national track meets and it is always fun to reconnect and laugh. Also, being around all the other elite athletes is always an honor.

Watch Ky and the rest of the Brooks PR "puzzle pieces" race on June 21st on Flotrack and MileSplit!