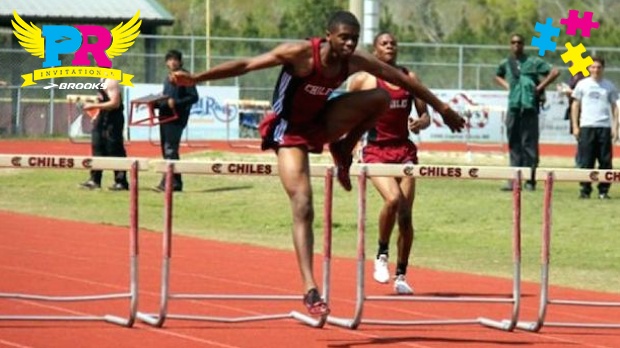 Another piece to the Brooks PR puzzle is Chiles High School hurdler Justin Cromartie. Cromartie was the 3A state champion in Florida in the 110 meter hurdles and third in the 300 meter hurdles in 2014. He will compete in the 110 meter hurdles and brings with him a personal best of 13.90 to the Brooks PR Invitational on Saturday, June 21st in Seattle.
When did you first learn that you were invited to the Brooks PR Invite and how did your react?
Cromartie: It was Friday May 23rd. My coach called me into his office to read an email I didn't know what to expect. I thought that maybe it was another college coach with good news and as I read I started to smile harder and harder. I wasn't expecting it. If I was faster than what I was at the time I received the invitation I would have been looking forward to it any day.
What does it mean to you to be invited to the Brooks PR Invitational?
Cromartie: It means a lot. It gives the hurdlers a chance to compete against the best in the nation. You probably won't catch us at the Dream 100/Mile which doesn't really seem as interesting as Brooks, there's only two events versus Brooks' seven.
What do you hope to achieve at the meet?
Cromartie: I hope to come out with a PR and/or bronze, silver or the golden spike.
What music do you listen to before races?
Cromartie: I listen to a lot of trance. Mostly Romanian artist like Edward Maya, Vika Jigulina, Violet Light, and Akcent.
If you were stranded on an island with three things what would they be?
Cromartie: A raft, a rope, and the U.S. Olympic swim team.
What would you consider as your best or most favorite race of all-time and why?
Cromartie: The 100 meter hurdle. it's such a competitive event. America is deep in the women's hurdles and they usually run cleaner races than the men so it's more fun to watch. The past two years everyone has been running similar times so the race is never guaranteed unless you're Brianna Rollins of course!
What are some things un-running related people might not know about you?
Cromartie: I'm an amazing chef!
How and why did you get involved in the sport?
Cromartie: 've always loved running, but my 6th grade social studies teacher asked me to join the team after he took us outside one day and organized a little race. It wasn't until the 8th grade that I started hurdling.
How has your training been leading up to the meet?
Cromartie: I have a hard hurdle work out every Tuesday. Wednesday we back down a little on the sprints. I have a basic hurdle workout on Thursdays and unless Friday is a pre-meet day I usually go hard because I spent the weekend recovering. Mondays are pretty chill. We just try to wake my body and legs up for what Tuesday has in store.
What are you most looking forward about your trip, race and weekend at the Brooks PR Invitational in Seattle?
Cromartie: Meeting the other hurdler. It's all I've really thought about and this potentially being the fastest race I've ever been in.

Watch Justin and the rest of the Brooks PR "puzzle pieces" race on June 21st on Flotrack and MileSplit!