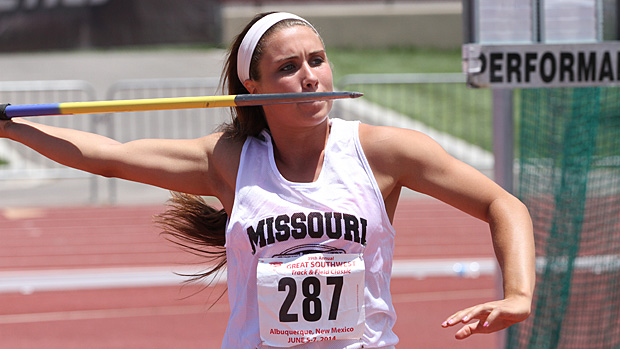 Morgan Griffiths' strong first day has given her the lead going into the second day of Great Southwest decathlon competition. Photo by Alan Versaw.

People from the arid Southwest are fond of the saying, "It's a dry heat." Maybe "wilting heat" would be a more accurate description, though most of the people doing the wilting were the people watching and working the meet, and not the athletes themselves. In any case, the thermometer was pushing 100 while the relative humidity hung around most of the day in single digits.

None of that, however, kept the favorites from staking out their expected leads.

In the girls decathlon, Morgan Griffiths of Missouri built a miniscule nine-point first-day lead over Morgan Hartsell of Texas largely on the strength of her pole vault and discus. Griffiths won both events at 3.61m (11-10) and 28.36m (93-0). Interestingly, Hartsell was a solid second in both events, but it was these two events where Griffiths gained most of her edge on Hartsell. Hartsell, on the other hand, took top honors in the javelin and ran well ahead of Griffiths in the 400. Much remains to be decided, though--barring a Friday collapse by both--the decathlong title already seems pretty much assured for one or the other.

Although the decathlon had one more event to work through today, its first-day event schedule completed well ahead of the heptathlon on account of a 50-minute earlier start and no high jump to deal with on the first day, and--most importantly--the fact that the decathlon has only six athletes to work through the events whereas the heptathlon is dealing with a crowd of 30.

That heptathlon crowd of 30 witnessed a nip-and-tuck battle between the two favorites--Ashley Moore of Arizona and Tiana Bonds of Nevada. 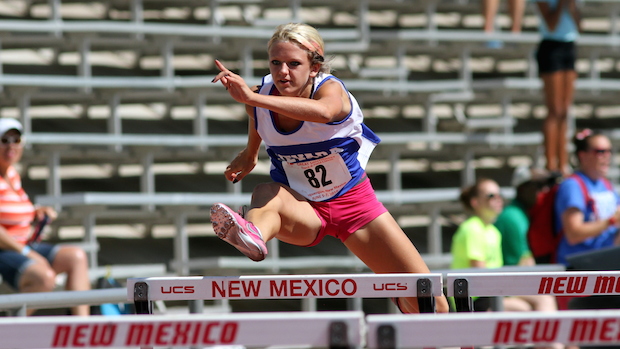 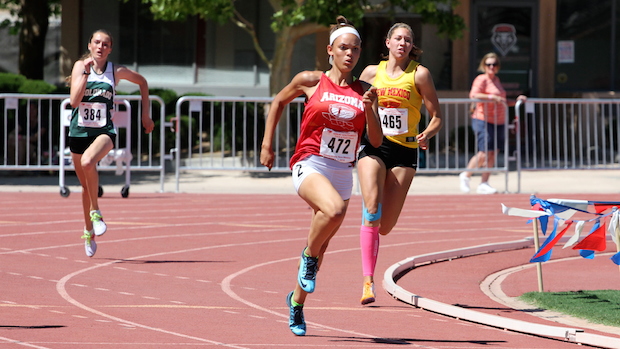 Moore gained another 102 points on Bonds in the shot put, and suddenly it seemed as if Moore might try to negotiate an early surrender from the rest of the field. Bonds, at least, was disinclined to accept the terms offered and regained 90 points with a 24.40 in the 200.

At the end of day one, Moore held a slim lead of 40 points over Bonds--3285 to 3245. The closest competition was 300 points back with little hope of recouping that margin in the three remaining events. 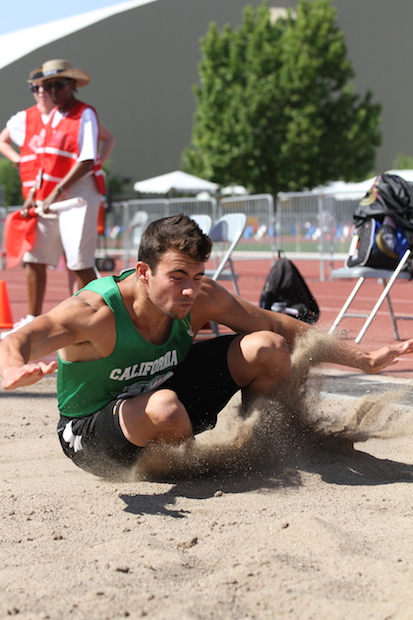 A similarly intriguing race developed in the boys decathlon. Pre-meet favorite Zack Bornstein of California managed to end the day in the lead as expected, and also managed to perform at or above expectations in each event. What we didn't see coming, however, was a strong surge from Trevor Bursach of Utah and Jerrick Powell of Missouri.

Powell took an early lead, beating Bornstein 11.20 to 11.32 in the 100. Bursach finished an inconspicuous sixth in the opening event. Powell would also win the long jump a 6.91m (22-8), but it was in the long jump that we got our first glimpse of the kind of contender Bursach would be when he took second with a leap of 6.88m. Bornstein would settle for third at 6.55m.

Powell's run of first-place finishes ended abruptly at the shot put, while Bornstein notched his first event title at the same venue with a throw of 15.19m (49-10). Bornstein finished a little over nine feet and more than 170 points ahead of second and seemed--for the moment--safely in control of the competition. But, nothing is safe after only three events.

Bursach made his bid for the lead with a spectacular event at the high jump, clearing 2.00m (6-6.75). Powell and Bornstein, however, kept themselves in solid position with clearances of 1.88m and 1.82m, respectively. Bornstein remained in the lead, but did cede some precious ground to his main competitors at the high jump.

The first day of decathlon competition traditionally closes with the 400. And, fittingly, the top three competitors claimed the top three places--Bornstein with a 49.55, Powell with a 50.03, and Bursach with a 50.39.

At the end of the day, Bornstein leads with 3762 points, but Bursach and Powell remain just a litle over 100 points behind at 3645 and 3636, respectively.

Action resumes tomorrow with the girls heptathlon still to contest the long jump, javelin, and 800. The girls decathlon must work their way through the shot put, long jump, 100 hurdles, high jump, and 1500. And, the boys decathlon has the discus, javelin, 110 hurdles, pole vault, and 1500 remaining.