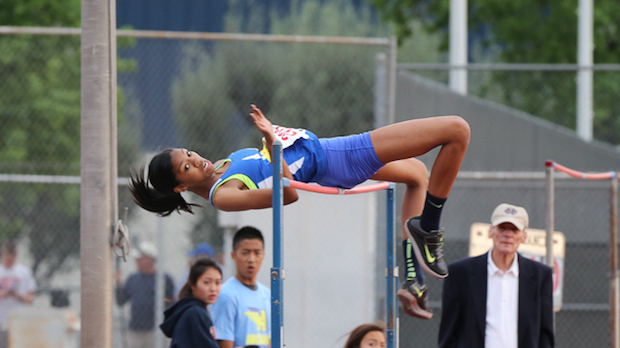 Vashti Cunningham, the sophomore high jump standout from Bishop Gorman High School in Las Vegas, Nevada, moved the bar one inch higher than her previous best and US leading clearance to finally clear over a height of 6'3" at her regional championship meet this past weekend. The performance elevates her to become US #3 all-time in the event behind only Amy Acuff (Calallen, Corpus Christi, Texa) from 1993 and Toni Young (Del City, Oklahoma) from 2009 as the only two have cleared a greater height in the nation's history for the high school girls high jump (both share the national record at 6'4".

Being only a tenth grader and possessing great athletic genes with her father being former NFL star quarterback Randall Cunningham, there is no question that Vashti Cunningham has a real chance of challening, tying, or even breaking that outdoor national record of 6'4" this year or prior to high school graduation in over two years. After clearing 6'0.25" as a freshmen last year and winning the Nevada state title as well as the AAU Junior Olympic Games age group national title last spring and summer, Cunningham has continued to progress into the current season with major wins earlier in the season in California between her previous best of 6'2" from the Arcadia Invitational and a 6'1" win at the Mt. SAC Relays.

Next up for Cunningham will be the Nevada State Track & Field Championships, which will be held on May 23rd and 24th at Carson High School in Carson, Nevada. Here is to hoping that Cunningham plans to extend her season beyond her state meet and compete for several national titles in post-season competitions and chase after that 6'4" national record.