Spencer Haik has a big race and opportunity looming tomorrow to defend his Kansas Relays title against last year's Drake Relays champion Josh Evans from Linn-Mar High School in Iowa, but first mission of the weekend was getting that school record and win in the 3200 on Friday afternoon. The Glendale senior Haik was able to dispel a field of guys look to play the spoiler of a potential 3200/1600 sweep for Haik and unleash his powerful kick to a new PR and school record time of 9:05.04. Haik had company the whole way until he turned on the after burners in the final lap from Kansas state cross country champ Caden Callaway of Pike Valley (2nd, 9:09.52), Wisconsin state cross country champ Ethan Moehn of Monroe (3rd, 9:10.08), and Kansas 1600 state champ Sam Guinn of Blue Valley Northwest (4th, 9:12.07). An impressive list of runners for Haik to defeat in his 3200 win at the Kansas Relays. 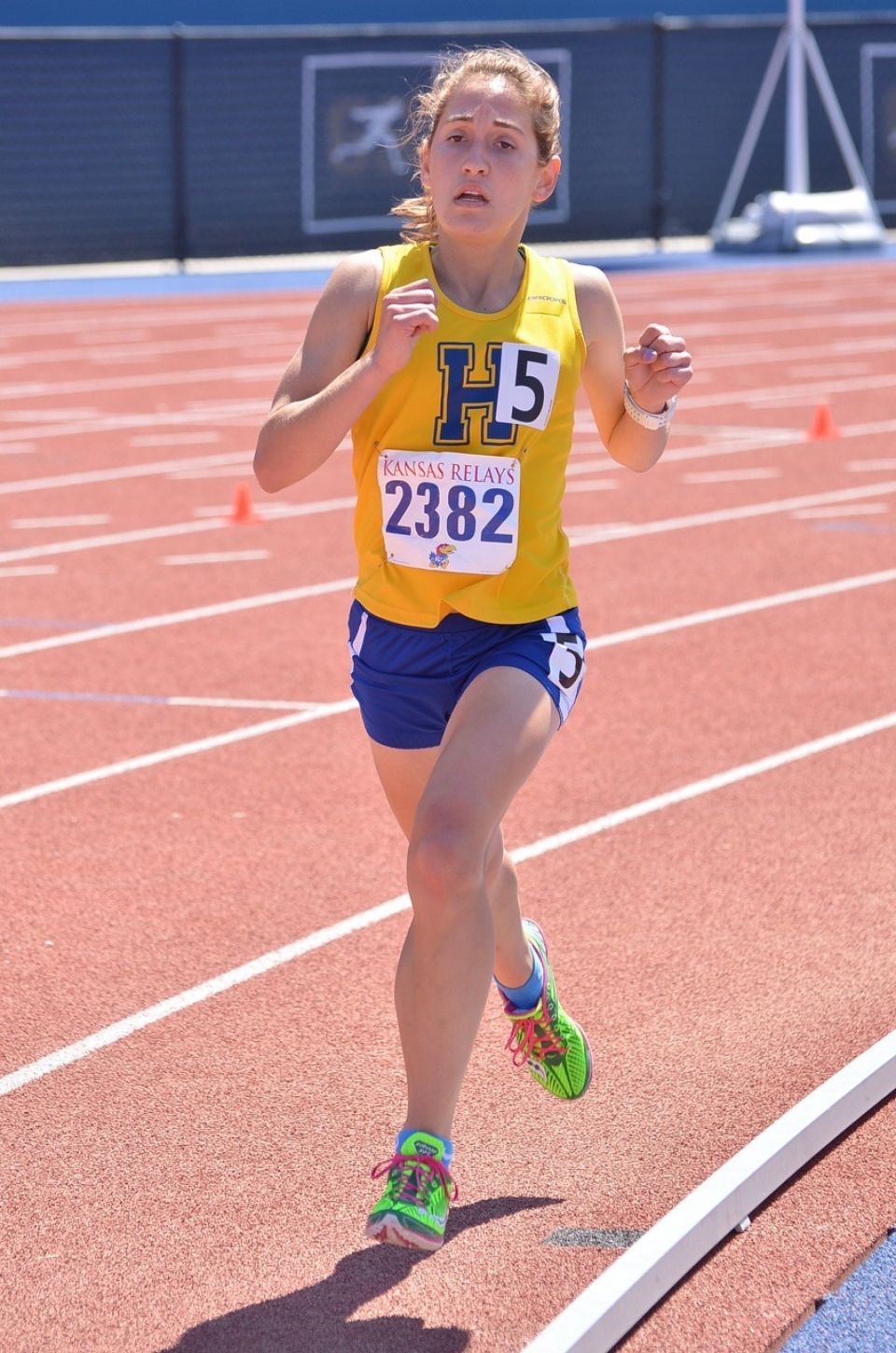 Seven girls broke 11 minutes in the 3200 with the race coming down to the end between Kristen Adams of Francis Howell (MO) and Jill Whitman of Cor Jesu Academy (MO). Both girls ran lifetime bests as a result of pushing each other as well as the competition behind them, but Adams had the slightly better finish than the 2013 Missouri 4A state outdoor 3200 champ Whitman (2nd, 10:40.04) for a remarkable 19 second PR drop and Kansas Relays victory at 10:38.84.

​In the preliminary rounds of the 100 meter dash, which Saturday's finals winner earn an automatic invitation to compete in the adidas Dream 100 in New York City on June 14th, Michael Wells from Missouri and Alleandra Watt from Colorado were the swiftest. Watt was 3 tenths of a second faster than the next fastest qualifier Anglerne Annelus of Grandview (MO) with a 11.75 clocking for the Pine Creek (CO) junior Watt to open her meet up. Wells of Cleveland NJROTC High School looked very sharp in his prelims race for the boys 100 to roll out a 10.58 top time, but still has to consider Kansas state champ Joe Reagan as a serious threat who comfortably won his heat in 10.74.

Wells also showcased off his range by stepping up to 400 meters and running a new personal best time of 48.96 to be the second fastest qualifier for Saturday's finals. Wells is setting up for a great battle int he 400 meters with top qualifier Charles Jones of Cardinal Ritter (MO), who is one of the nation's top returning half milers. Jones ran 48.58 on Friday as the leading finalist, but also has run under 48 seconds before and run 1:50 in the open 800 to build towards an exciting battleground match-up between one of the Midwest's top sprinters in Wells and top middle distance runners in Jones for a one lap.

The 400 meter prelims turned out to be a warm-up race for Charles Jones as later on Friday night, Jones breezed through the competition in the 800 meter run to win by 3 seconds in a time of 1:53.36 for the MileSplit US All-American Watch List #1 ranked in the boys 800. 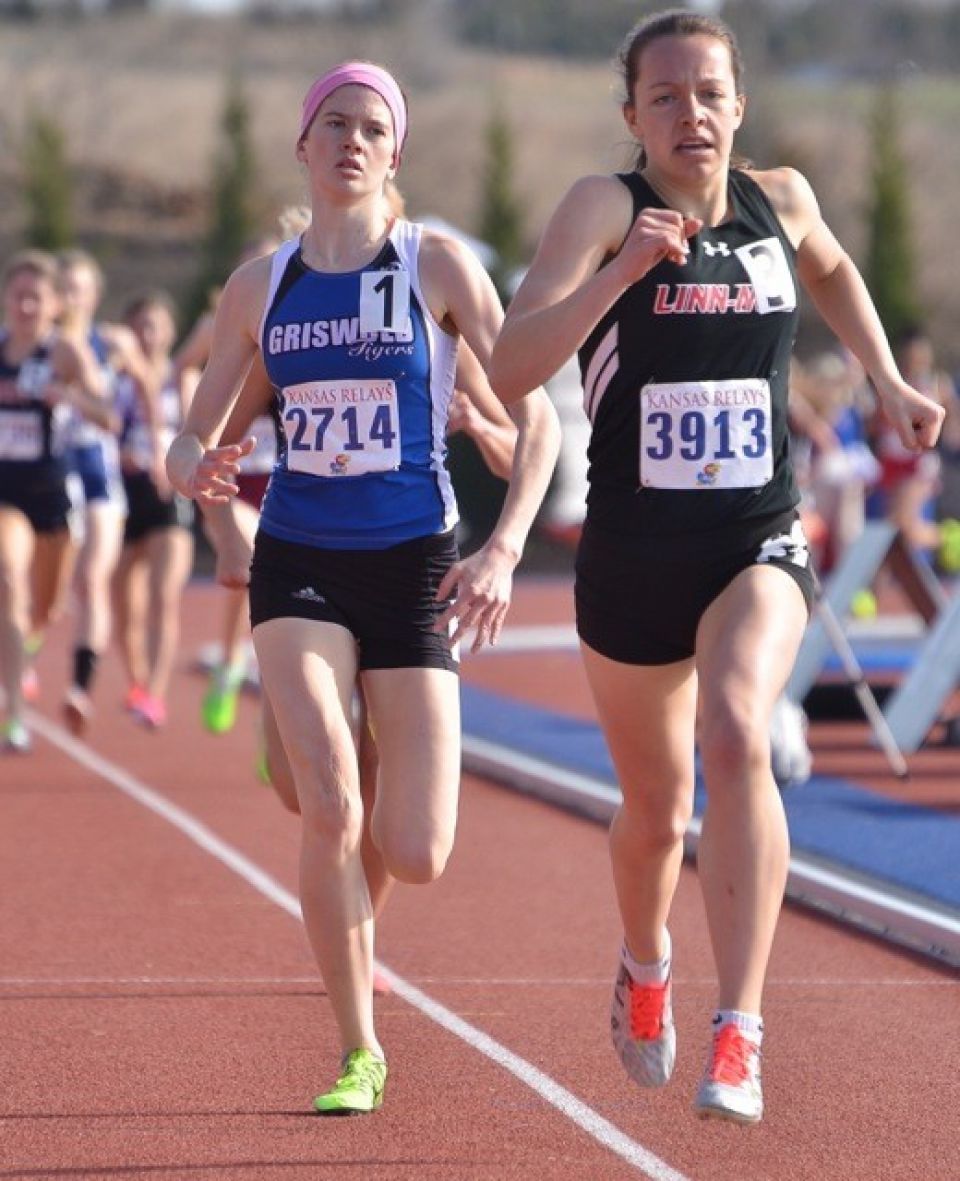 Iowa's best two distance runners in Stephanie Jenks of Linn-Mar High School and Rebekah Topham of Griswold High School did not wait until tomorrow's 1600 with an adidas Dream Mile auto spot on the line to lock horns and face off at KU. Jenks and Topham went to battle at 800 meters on Friday evening with Jenks able to pull out the slight victory with a official time of 2:12.38 for the sophomore, while the junior Topham once again had to settle for second place in a head-to-head against her in-state rival with a time of 2:12.98. The two sub 4:50 milers will be back on the track against racing each other on Saturday in the Kansas Relays seeded girls 1600 section. 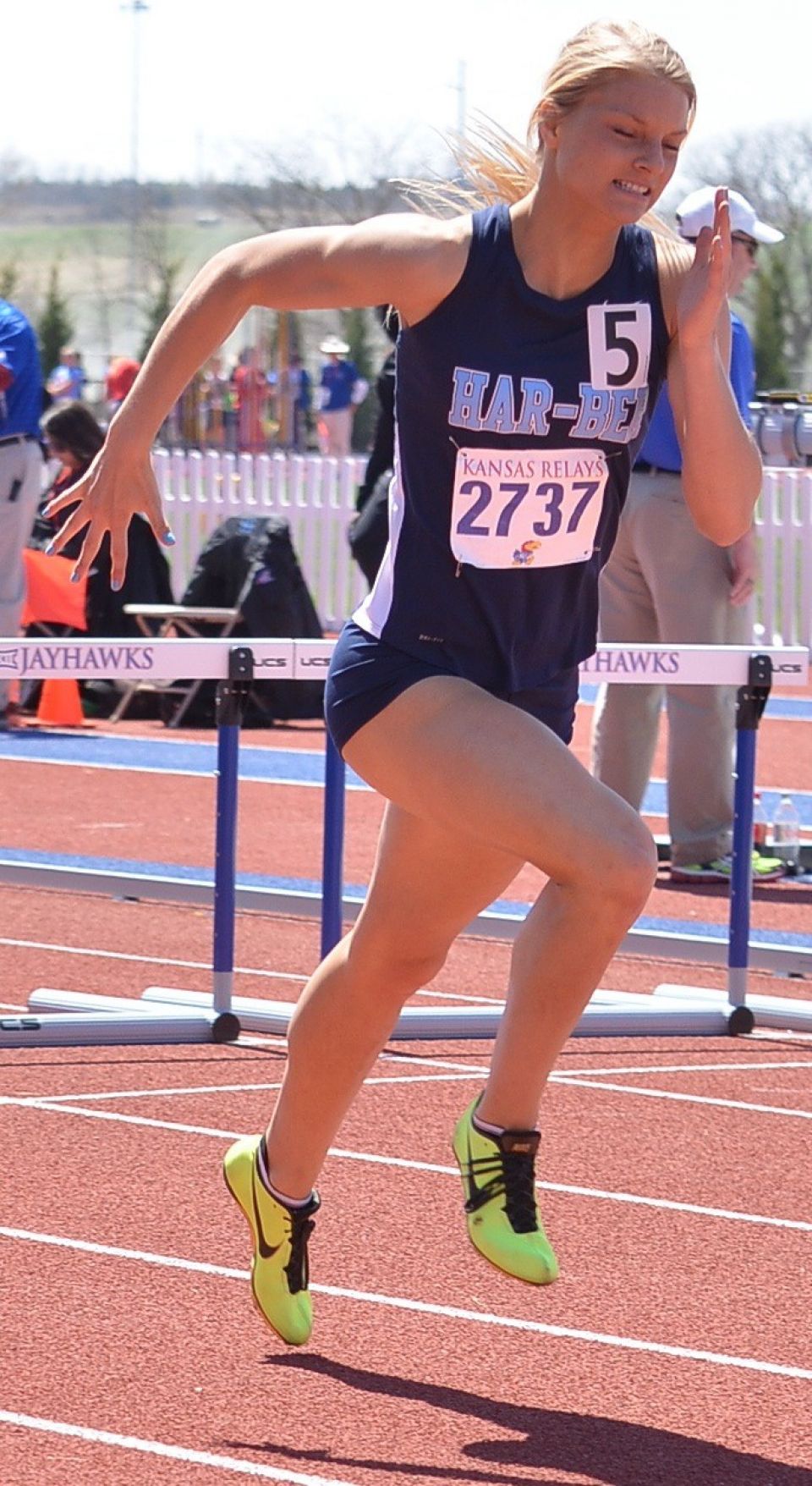 Payton Stumbagh of Har-Ber High School in Arkansas was the top performer in the girls hurdles as easily the leading qualifier the 100 meter hurdles (14.24), while dominating 300 meter hurdles finals with a new personal best time of 43.14 for the Arkansas state champ. Stumbagh will look to see if she can run close to or best her 100 meter hurdles PR of 14.07 from a third place finish in the Texas Relays last month. Har-Ber teammate Amanda Dillon was the top performer in the girls 400 meter dash prelims with a 56.43 clocking in heat 3, while another junior in Ashanti Hutton of Grandview (MO) also ran under 57 seconds in the prelims at 56.84 to setup the finals match-up. 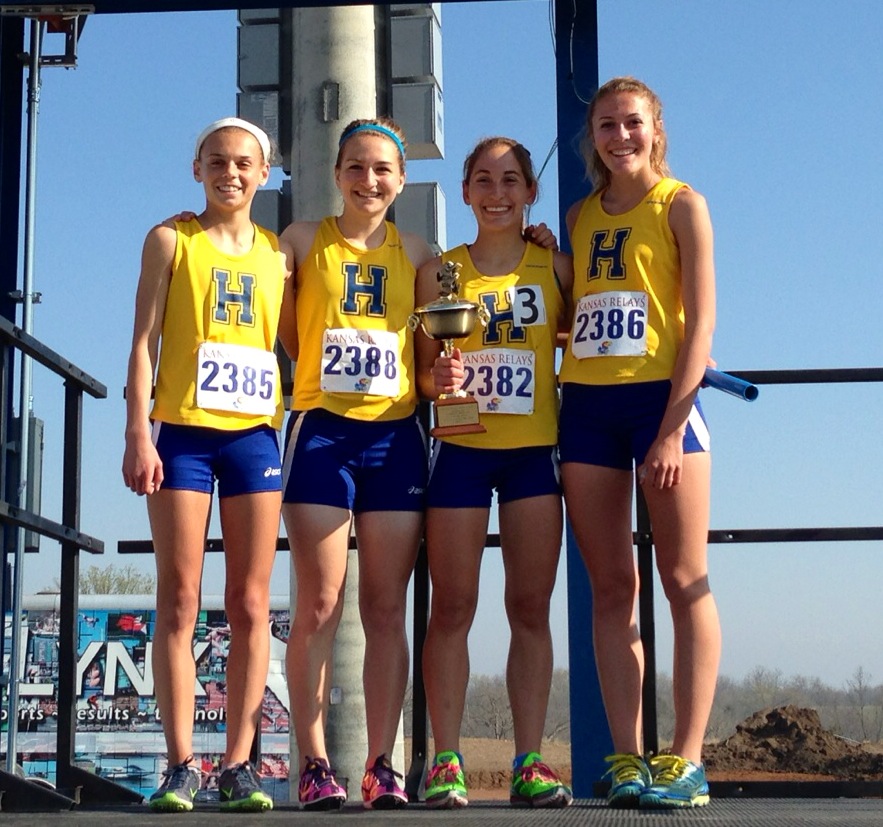 Averaging around 5:15 splits per leg, the Francis Howell girls won the 4x1600 meter relay at KU in a new meet record time of 21:01.97. The time ranks #9 in the United States for the quartet from Saint Charles, Missouri. It was a runaway win for Francis Howell as the next closest finishing squad was 29 seconds back in the Pine Creek squad (2nd, 21:30) out of Colorado. The 3200 meter winner 5 hours earlier, Kristen Adams continued her great day with a 5:09 anchor leg split for the first place Francis Howell relay. Adams was the only leg in the whole race to split under 5:10 as that was a first time under the barrier for her after recently running a 5:11 PR in the open 1600 earlier this spring.

Meanwhile, the boys team proving to have the most distance depth at the Kansas Relays went to the Olathe North boys as they claimed the 4x1600 race in a time of 17:50.88, which equates to roughly a 4:27-4:28 average per leg. The Olathe North boys out of Kansas were anchored to victory by Nathan Wickeron, who had a lifetime best split of 4:20 which easily bests his 4:28 PR in the open 1600. Wickeron and the Olathe North squad were able to hold off a stiff challenge from Nebraska's Omaha Creighton Prep (2nd, 17:53.39).

In the distance medley relay for the girls, the Lee-Summit West squad from Missouri led from the first handoff after a 3:53.60 1200 meter opening leg split by Annika Sisson to the finish with a 5:08 anchor from Elizabeth Nolke to win the DMR with a total time of 12:27.29. Nolke had to really run with Bailey Sullivan from Lawrence-Free State (KS) trying hard to win for her school and the home crowd as she made up 4 seconds in time with a 5:04 anchor leg split herself with her team finishing four seconds back in the end for second place at 12:31.  Sullivan has run 5:08 in the open 1600, so her Kansas Relays DMR split was a definite breakthrough time.

After getting second earlier in the day in the 4x1600 by only a few seconds in a 16 lap race, the Omaha Creighton Prep boys of Nebraska were not going to be denied another first place finish in the DMR to end their evening. The Creighton Prep squad was able to pull away by a 8 second margin of victory over one of the top distance programs from Oklahoma in Jenks High School (2nd, 10:39) for a final winning time of 10:31.77.

Some of the top performances in Friday's events included a US #5 throw of 155'2" in the girls javelin from Maize (KS) junior Keiryn Swenson. Swenson has been a Kansas state runner-up the past two years in the javelin and is looking to breakthrough this spring with her first state title.

Other field events highlights seen were with a 6'10" clearance in the boys high jump by Marcel Ryan of Papillion-La Vista High School in Nebraska, while defending Missouri 4A pole vault state champ Sierra Maddox of Jackson High School notched another major meet to her growing list of first place finishes in the girls pole vault with a clearance of 11'9.75" on Friday at KU.

More highlights to come from Friday's events at the Kansas Relays after results posted for the prelims of 4x100 and 4x400 and boys discus which was to feature the current US leader Kord Ferguson of Ottawa High School from the homestate of Kansas.

Check out our race video and photo coverage below from the high school events at the 2014 Kansas Relays.

Can the two distance stars Josh Evans and Stephanie Jenks from Linn-Mar High School in Marion, Iowa make it a clean sweep of the high school 1600 meter races at the Kansas Relays and earn their way to the adidas Dream Mile? Kansas Relays defending champ Spencer Haik and top girls returnee Rebekah Topham are looking to spoil those plans.

The adidas Golden Stripes Tour is back for 2014!

The adidas Golden Stripes Tour is the premier high school track and field series in the country. It consists of the adidas Meet of Champions, Kansas Relays, Golden South Classic and Dream Mile & 100 (adidas Grand Prix).