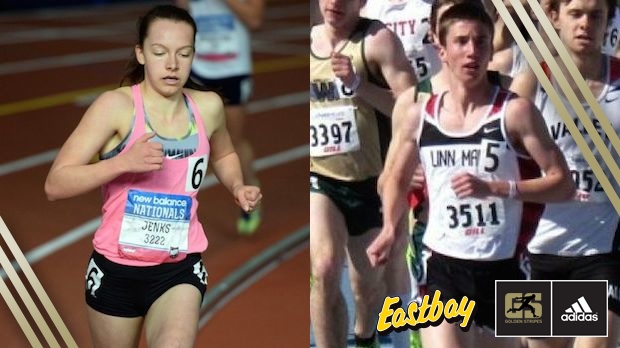 Can the two distance stars Josh Evans and Stephanie Jenks from Linn-Mar High School in Marion, Iowa make it a clean sweep of the high school mile races at the Kansas Relays and earn their way to the adidas Dream Mile? We preview the four high school events with tickets to New York City for the adidas Grand Prix in mid June on the line in Lawrence, Kansas this weekend between the 100 and 1600 for the boys and girls, which is part of the adidas Golden Stripes tour.

MileSplit will be on-site at the Kansas Relays with photo and video coverage of the high school races.

More on the 2014 Kansas Relays 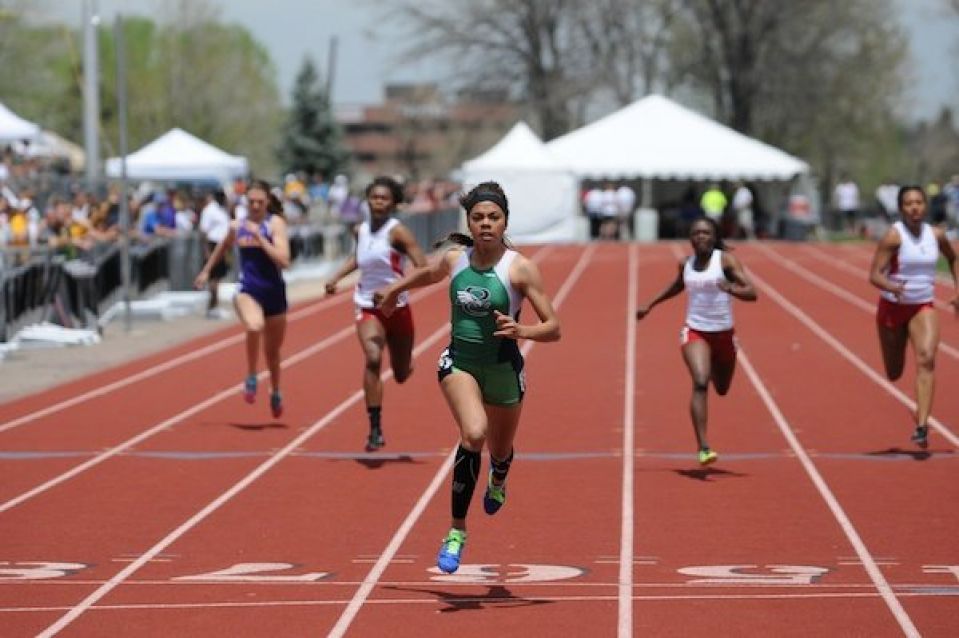 In the girls 100 meter dash at the Kansas Relays, Pine Creek (CO) junior Alleandra (Ally) Watt will be the strong favorite to win with a personal best of 11.41 from last spring and current season best of 11.85. Watt won the Colorado state title last spring in the 100 and was a state runner-up last spring in the 400 and 200. She was two spots away from representing the USA in the World Youth Championships in the 400 at the trials last summer (53.78 best). She entered this spring as #7 on the MileSplit All-American Watch List in the 100 meter dash. Watt had the sixth fastest nationally this past indoor season in the 60 meter dash at 7.43. 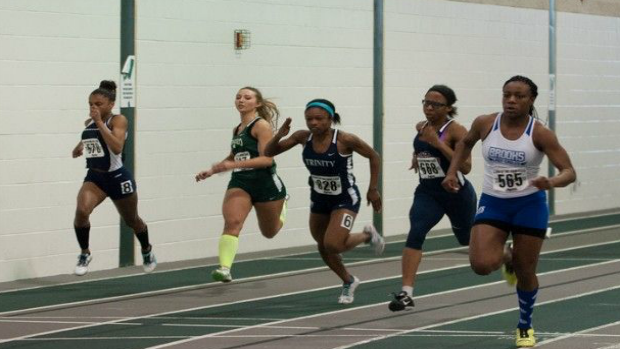 Top challengers for Watt in the fast section of the 100 meter dash will be two other sub 12 second girls in the field including Missouri 4A state champion sprinter Ashley Henderson of Hazelwood Central High School (11.84 PR) and arguably the fastest girl in the city of Chicago in Ebony McClendon (11.92 PR) of Brooks College Prep. McClendon flirted with a sub 7 second time in the 55 meter dash for most of the winter before finally getting under the time and joining a short list of the nation's elite with a 6.98 clocking at the Chicago Public Schools Indoor Championships. McClendon finished fourth in the finals of the 100 meter dash at the Illinois State Outdoor Championships last May and started venturing into the 11 second range during the summer track and AAU season.

Meanwhile, Ashley Henderson started out as a sub 12 sprinter in the 100 as a freshmen with a 11.97 clocking back in 2011 as a ninth grader and has remained under 12 the past two seasons including her first state title last outdoor season with a 11.95 performance in the finals of the Missouri 4A state meet. She is looking for her first sub 12 second performance of her senior year and potentially pull off a shocking win over Colorado's best in Watt at the Kansas Relays. She ran her season best of 12.31 in the 100 meter dash in win at the Charlie Beck Invitational and is the top returnee from last year's Kansas Relays when she turned in a runner-up 11.96 showing at KU. 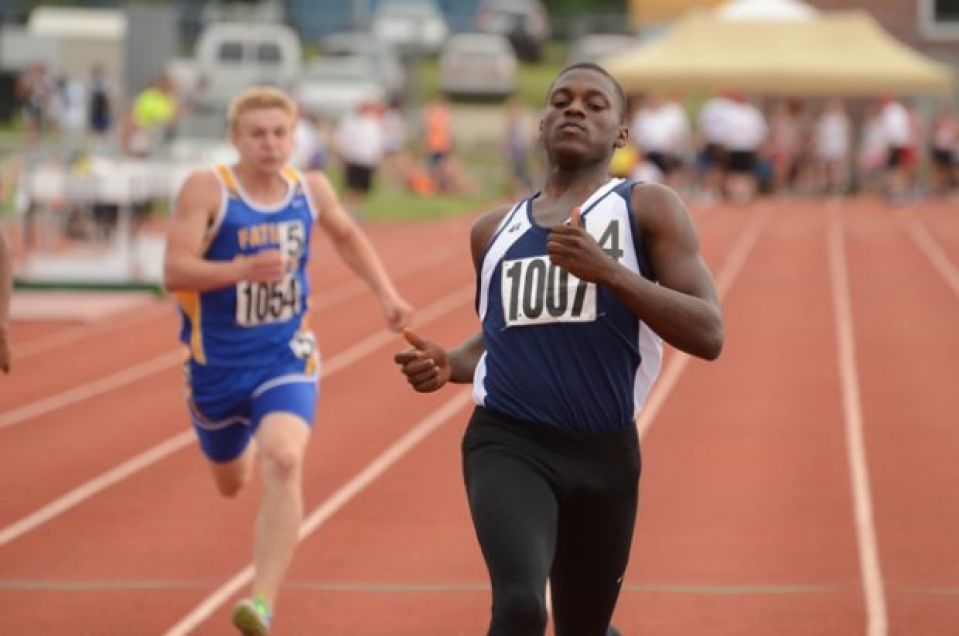 It will be a border state battleground in the boys 100 meter dash at the 2014 Kansas Relays between Missouri state champion Michael Wells of Cleveland NJROTC High School in St. Louis and Kansas state champion Joe Reagan of Seaman High School in Topeka. They are dead even with their all-time fastest in the 100 with both bringing 10.43 personal bests from last spring.

Not much difference in their season best times either with Wells clocking a 10.90 in the Festus Early Bird Invite at the end of March, while Reagan was a few ticks faster last week in a 10.86 victory at the Topeka Relays. The last time that Wells and Reagan raced each other was last summer in the AAU circuit at the area qualifier and national championship meet with the advantage going to Wells in a 2 to 1 win-loss record.

Behind them in the field, there is a tight pack of guys in the 10.6s to 10.8s range who are looking to breakthrough with a win at the Kansas Relays including Deron Thompson (10.64 PR) of Wichita Northwest High School in Kansas, Cameron Booty (10.87 PR) of Jenks High School in Oklahoma, and Jaymes Kelly (10.62 PR) of Grandview High School in Missouri.

Thompson seems like the best bet to potentially mix it up with Wells and Reagan as he has consistently been clocking times under 11 seconds for the past 2 years, but also look out for Nebraska state champion Simon Wiedel of Thayer Central High School in the race with a 10.84 PR. 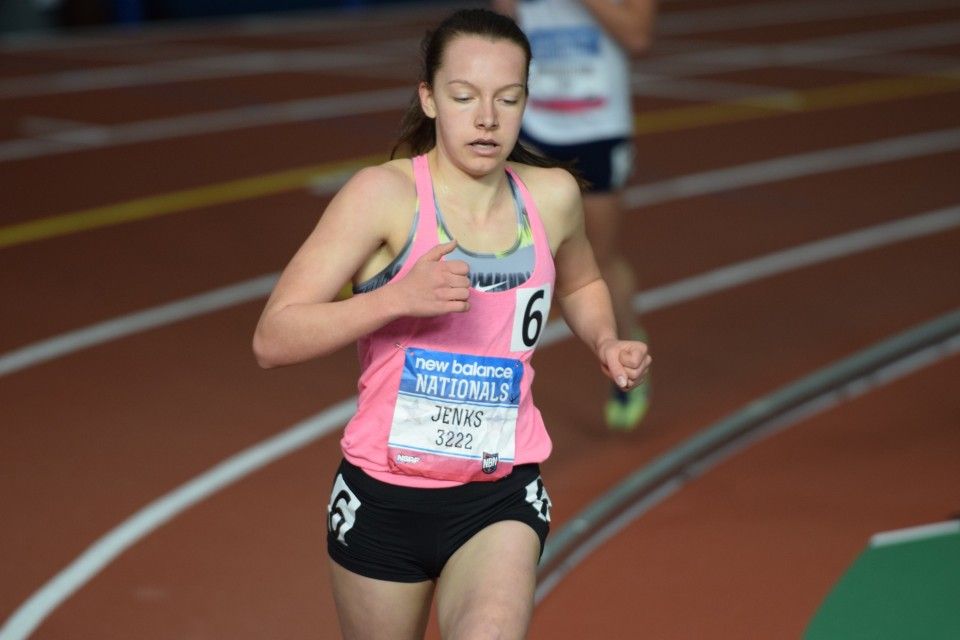 Rebekah Topham is one of the nation's fastest milers that no one knows about. The Griswold (IA) junior Topham has run 4:48 in the mile and run a swift 4:28 in the 1500. Part of the reason is that she is often overshadowed in her own state by Linn-Mar High School sophomore Stephanie Jenks. Once again Jenks stands in her way to national recognition as the second seed to her for the Kansas Relays high school girls 1600 on Saturday. Jenks owns a PR of 4:44 in the event from her remarkable race last June for fourth place in the adidas Dream Mile as a ninth grader and ran under 4:50 at the New Balance Nationals Indoor in March despite doubling back on tired legs from the 5K (16:37 PR runner-up performance) two days before. 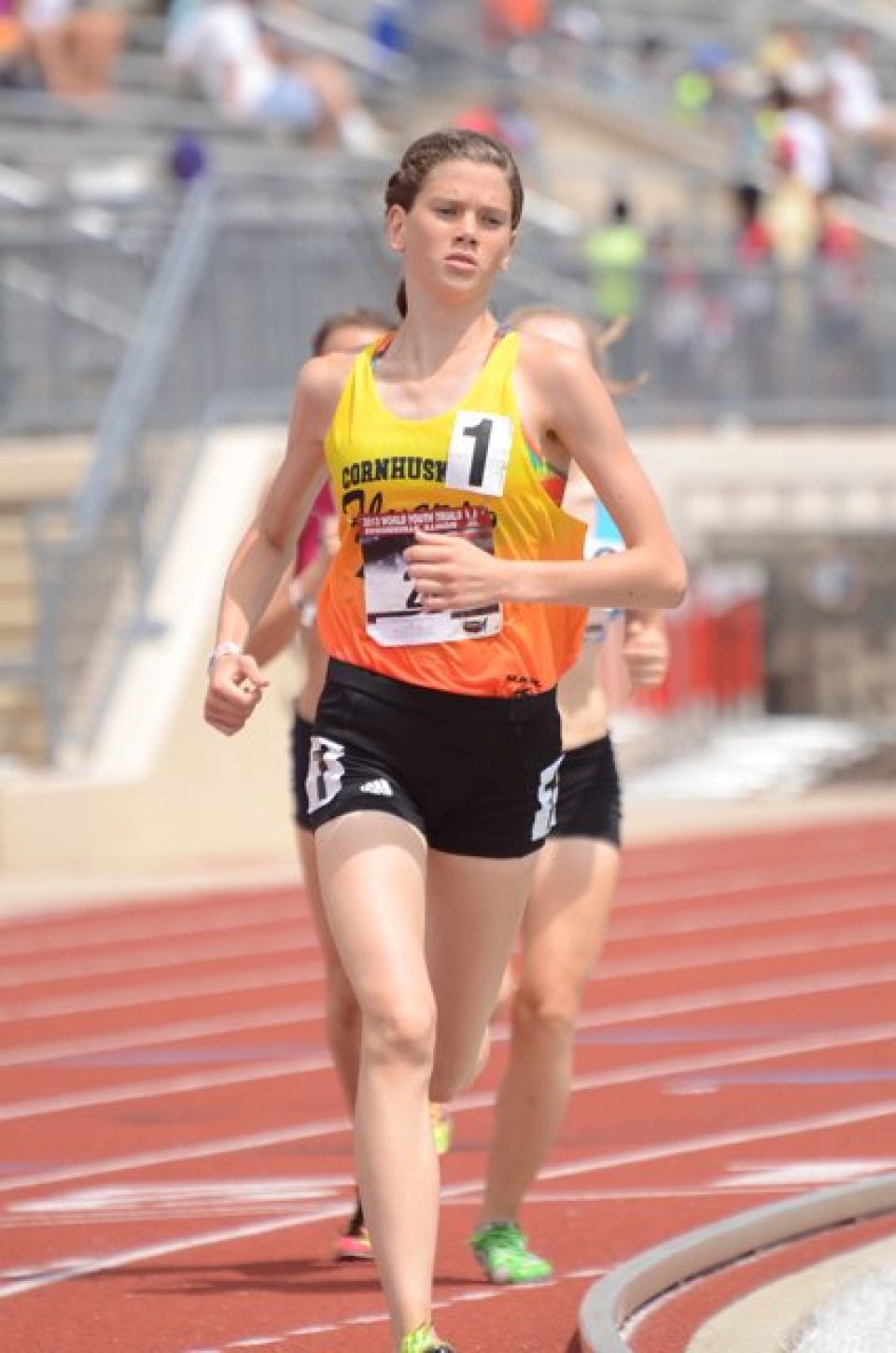 Topham is hoping that if she can't beat Jenks at the Kansas Relays, she can at least be pulled along to a fast enough time to earn herself an invitation for the adidas Dream Mile in New York City with Jenks. They do not get the chance to race against other in championship season in Iowa with Topham being in 1A and Jenks at a 4A school, so they look forward to any major mid-season invitational opportunities to face off. Last year, Topham earned an invitation to the Brooks PR meet indoors and took advantage of that trip running her lifetime best in the mile at 4:48 for fourth place against a national class field. She is the top returnee from last year's Kansas Relays 1600 meter race when she finished 4th in 5:02.

Fourth place should be much faster in the 2014 race as after the two Iowa stars Jenks and Topham is three more sub 5 milers in Jessica Parker of Neenah High School in Wisconsin, Jill Whitman of Cor Jesu Academy in Missouri, and Sydney Billingsley of University High School in Illinois. Parker has won the past two Wisconsin state titles in the 1600 with a 4:59 victory at the indoor state meet two weeks ago and last June running her PR of 4:56 in the her state outdoor championship. This is a big trip and race of Parker who has not traveled too often out of her state to face competition, so it will be interesting to see if she can stick with Jenks and Topham to pulled along to a time approaching 4:50.

Jill Whitman has run under 5 minutes once with a 4:56 race at her 2013 outdoor sectional race, but the Cor Jesu Academy senior Whitman was very close to her second sub 5 race two weeks ago in a 5:00.59 win at the Holt Invitational. The Kansas Relays should be the perfect race for Whitman to go under 5 again and potentially best that 4:56 PR from last May.

Meanwhile, Sydney Billingsley has been among the top level runners in her state of Illinois for the past two years but is looking for that sub 5 magic again from her sophomore year state outdoor prelims race in the 1600. She has a lot of momentum from the indoor season in which she won the unofficial state indoor season ending meet at the Illinois Top Times invite with a 5:06 win in the 1600. 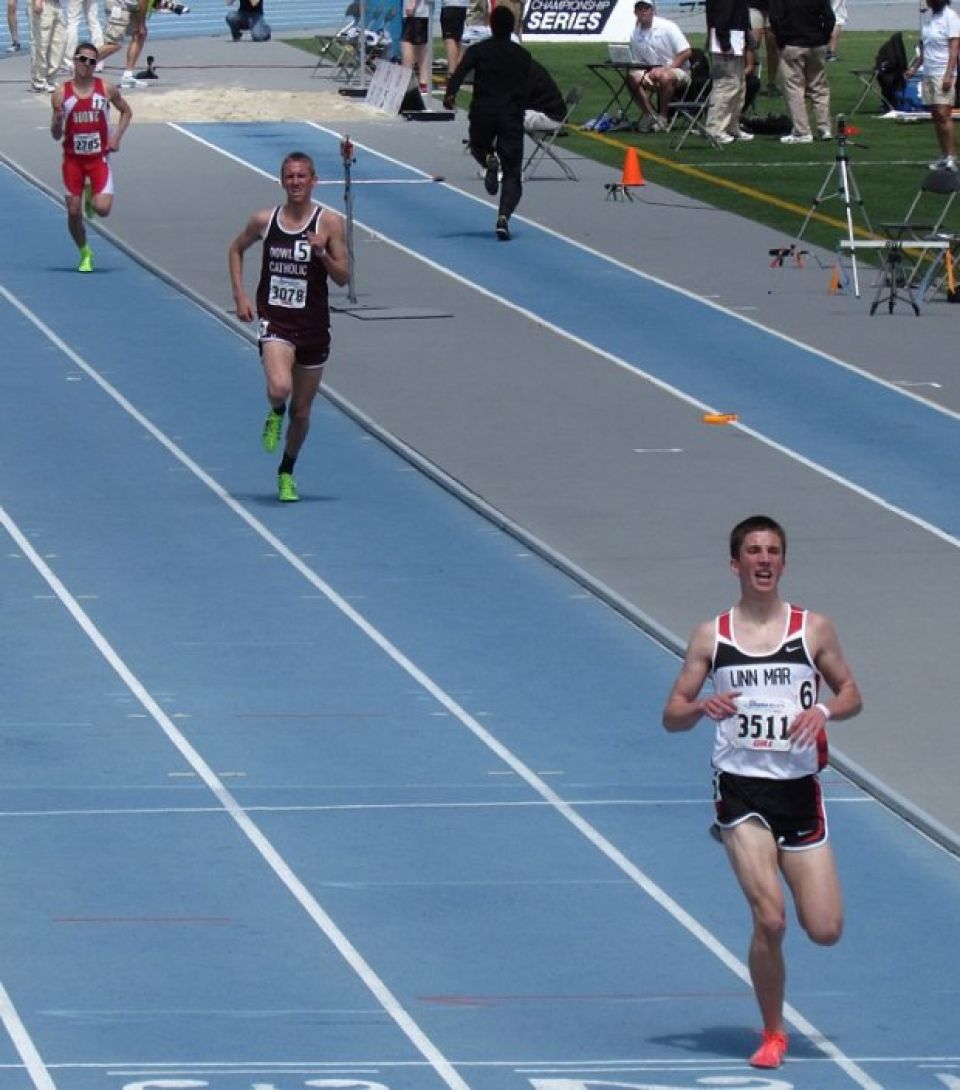 With over a half dozen guys having mile or 1600 personal bests at 4:15 or faster, the Kansas Relays boys 1600 should be the best race at that distance across the country right smack dab in the dead center of the nation. The field will be led by the two favorites in guys pushing to run a winning time under 4:10 between Josh Evans of Linn-Mar High School in Iowa and Spencer Haik of Glendale High School in Missouri.

Evans was last year's Drake Relays 1600 meter winner with a 4:10 PR and actually improved upon that performance in the post-season by running a 4:10 for the full mile at the Midwest Distance Festival. A state cross country champion in the fall, Evans is looking to secure passage to the adidas Dream Mile after failing to qualify for the Foot Locker Nationals (16th at FL Midwest Regional) and Nike Cross Nationals (8th at the NXN Heartland Regional) in the fall post-season. A win at Kansas Relays would automatically propel him to an opportunity to race against the country's top prep milers at the adidas Grand Prix on June 14th. 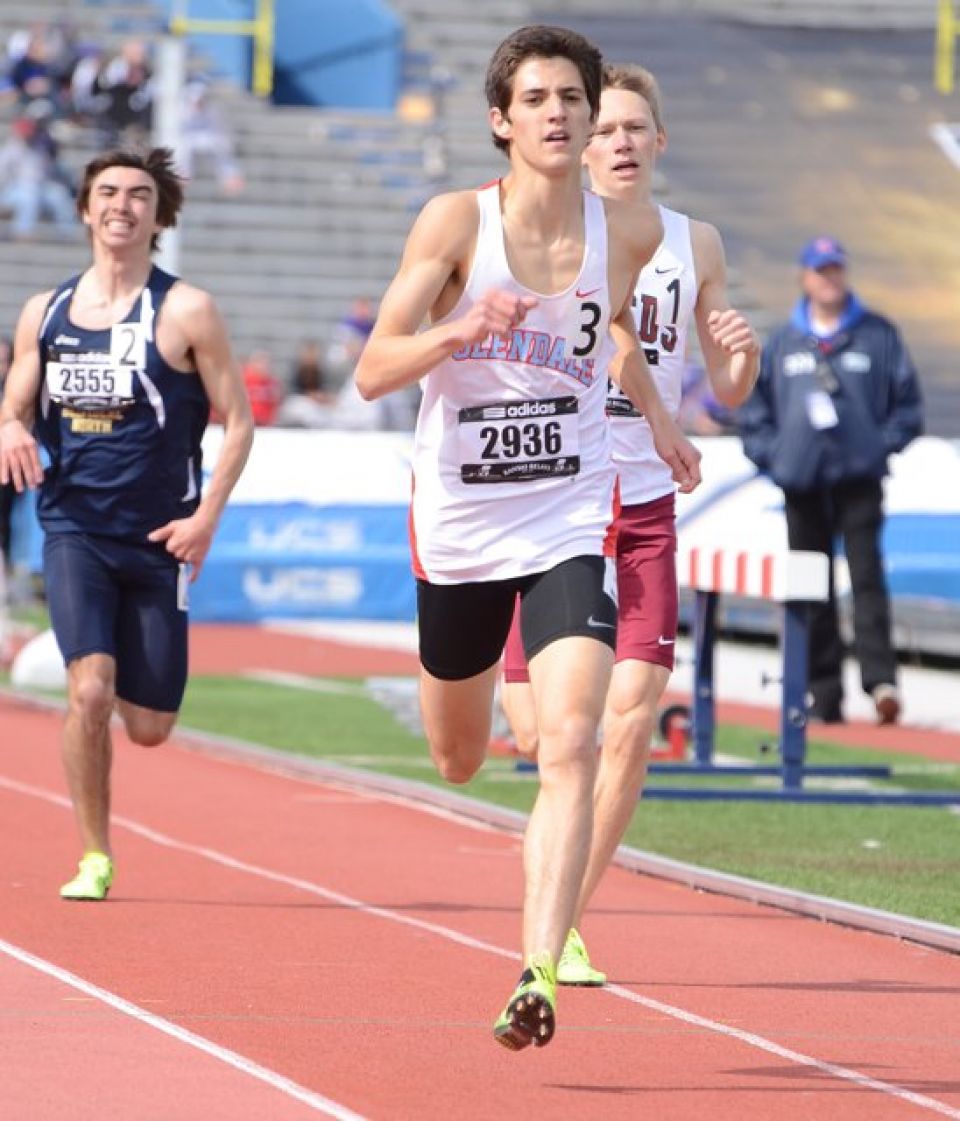 The 2013 Drake Relays champ will facing off with the returning 2013 Kansas Relays champ Spencer Haik from Glendale High School in Springfield, Missouri. Haik won last year at KU with a time of 4:11.76, which remained his personal best until last weekend when he popped a time of 4:10.99 at the Hillcrest Invitational. Haik has some closing wheels as shown last year when he doubled to win the 800 meter run at the Kansas Relays in a time of 1:55.84. Evans matches him with a 1:55 800 PR as well. Another notable victory for the two-time Missouri 4A 1600 meter outdoor state champ came in the post-season last May at the Festival of Miles with a 4:12.23 mile.

It should be a very evenly matched and close race between Evans and Haik as well as a fast one too with the guys behind them to keep the pace honest on and on their toes. Arkansas state champion Brendan Taylor of Little Rock Catholic especially is one to respect and not sleep on. Last time we saw Taylor race was at the Texas Relays as he unleashed a swift kick off the final turn to claim the 1600 meter title there in 4:14.66. Last June, Taylor ran a time not far off Haik in the post-season last June with a 4:13.88 mile win at the Music City Distance Carnival in Tennessee.

Noah Kauppila is looking to bounce back from a disappointing DNF in the Arcadia Invite 3200 last weekend in Cali (after running his lifetime best of 8:54 in the 2012 Arcadia Invite) with a redeeming race in the 1600 at the Kansas Relays. Kauppila has many great races to recall including winning the Missouri state title in cross country and the 3200 last outdoor season, while qualifying for the Foot Locker Nationals in San Diego this past fall. The Marquette High School senior has twice run 4:13 for 1600 meters and two weeks ago posted a season opener of 4:17 in the event.

Blue Springs junior Stephen Mugeche is coming off a big PR drop of 9 seconds at the Arcadia Invitational as one of the 20 guys that broke 9 minutes there in 18th place at 8:58.87. Next on his list is to drop that 4:15 1600 PR from last spring's Missouri State Outdoor Meet after running back to back 4:18's to open his 2014 outdoor season. Mugeche is considered more of a 3200/5K type, but looking to prove that he has the strength to hang with the likes of strong closers Haik and Evans.

Another state champion caliber runner to consider in the field is Sam Guinn of Blue Valley Northwest with a 4:16 personal best in the 1600. Guinn won the Kansas 1600 state title last spring as well as finishing a state runner-up in the 3200. He opened up his spring last week with the exact time he finished last spring in winning the Kansas state 1600 title in 4:19, so indicates he is ready to push for a time under 4:15 certainly in the 2014 outdoor season.

After running a 4:15 1600 PR at major altitude last weekend, Liam Meirow of Summit High School in Colorado is looking forward to coming down in elevation this weekend to the plains of Kansas and see if he can prove those altitude conversions true with a time drop. A Colorado state cross country champion in the fall, Meirow ran a 4:18 mile last spring for third place at the Golden West Invitational in California, but his recent win at the Mullen adidas Runners Roost Invite indicates he may be ready for even another performance breakthrough.