We are thrilled to announce this weekend's Taco Bell Classic at Spring Valley High School in Columbia, South Carolina will be live streamed on MileSplit and SCRunners.com! The Taco Bell Classic is annually one of the best high school outdoor track & field invitational meets in the entire Southeast as the meet gathers many of the top athletes from the surrounding states of South Carolina and beyond. Many US top 10 performances and US #1's are often produced regularly year after year at this event.

The live stream of the Taco Bell Classic is available to MileSplit insiders from all states. If you are not currently a MileSplit Insider and would like to have access to the Taco Bell Classic live stream, you can sign up for MileSplit Insider access here in advance or click on the Insider tab in the navigational bar on your respective MileSplit state site page to support the coverage directly in your state.
Direct link to the live stream (which begins on Friday, April 11th at 5:45 PM ET) can be found here or direct link: http://sc.milesplit.com/articles/125029

Videos will also be archived to watch after the meet on the Taco Bell Classic meet page on MileSplit here:

The field for this year's Taco Bell Classic includes several national champion and All-American caliber athletes as well as numerous state champions from various states. There will be a rematch of the boys 200 meter dash finals from this past March's New Balance Nationals Indoor but instead in the 100 meter dash between national champion Trentavis Friday of Cherryville (NC) and Darryl Haraway of DeMatha Catholic (MD). Friday was a double national champion indoors in both the 60 meter dash and 200 meter dash. Friday is coming off a near personal best clocking of 10.38 last week in the 100, while Haraway is attempting to be a double winner entered in both the 100 and 200 with all-time best times of 10.49 and 21.15 in each sprint race respectively. 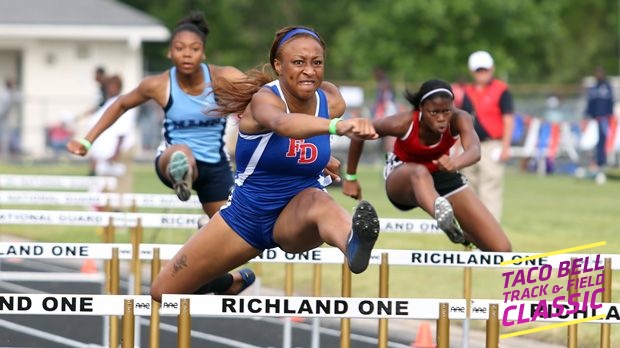 Another highly anticipated straightaway race will be seen in the girls 100 meter hurdles with four girls entered of national class caliber and having personal bests under 14 seconds in the event. South Carolina's best in Jasmine Quinn of Fort Dorchester is the current national leader after running a 13.33 personal best last weekend. Virginia state champion and indoor 55 meter hurdles national leader Chantel Ray of Hampton is back to defend her Taco Bell Classic title in the event and has a PR of 13.69. Shanel Burr from Georgia and Anna Cockrell from North Carolina make it a total of four sub 14 second girls as well as four states represented as the top contenders in the race. Burr and Cockrell will come back in the 400 meter hurdles to challenge the 60 second barrier and national leading time in that event. 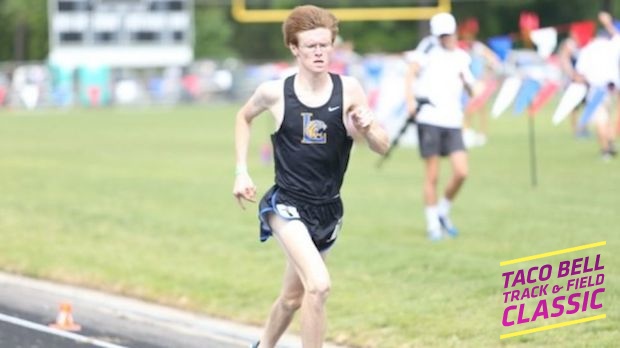 The boys 3200 could be one of the fastest ever on South Carolina soil with 3 entrants under 9:20 and several others looking to join them led by Patrick Sheehan of Lake Norman (NC) at 9:12, Daniel Navarro of Marist (GA) at 9:14, and Gabriel Haughey of Daniel (SC) at 9:15. Lexington's Zachary Langston (SC) leads the boys mile field as the South Carolina state champion distance runner last spring popped a 4:15 mile at the Golden South Classic.
In the girls distance races, Dunwood (GA) sophomore Lauren Jackson scored a major invitational win last weekend with a 2:12 800 at the Mobile Challenge of Champions in Alabama and is trying to notch another big victory this weekend in Columbia, South Carolina at the half mile distance. Sara Platek, a ninth grader at Ragsdale High School in North Carolina, will be attempting to be a double winner at Taco Bell in the mile and 3200. Platek won the freshmen mile at indoor nationals and has recently under 5 minutes for 1600 meters and broken 11 minutes for 3200/2 times four times already including a 10:40 full two mile at the New Balance Nationals Indoor.
The 400 meter races should be smoking hot including two junior boys who have already dipped under 48 seconds in Deandre Daniels (47.88) of Moose Creek and Justin Marsh (47.95) of Howard. Daniels was a South Carolina state runner-up last spring with a 48.04 performance, while Howard is making the trip down from Maryland after earning All-American honors indoor with a 47.95 clocking at the Armory.
In the girls' 400 meter run race, Brandee Johnson of Nansemond River is a current Virginia state outdoor leader in several events and travels south again after running a 200 meter lifetime best of 23.74 in the US Area Olympic Selection Trials in Florida last weekend and ran close to 39 seconds flat in the 300 indoors as the Virginia 4A state champ. 800 meter top seed Lauren Jackson is also an outstanding quarter mile and last June won the freshmen 400 at outdoor nationals with a 54.94 PR.
The girls 4x100 meter relay has four quartets seeded 47 seconds or faster. Nansemond River with Johnson will be in the race, while 200 meter dash top seed Simone Glenn will likely anchor for the Bullis School girls. Glenn was featured on MileSplit's All-American Watch List in the 200 meter dash last week as she has dipped under 12 seconds in the 100 and 24 seconds in the 200 to be one of the speediest legs in the relay race.
The boys 4x400 meter relay should be a thriller to close the meet with the Hopewell boys trying to take it with their North Carolina state leading season best time of 3:19.97, while the DeMatha Catholic boys of Maryland were among the US top 10 in the event indoors for much of the winter and look to try and join Hopewell under 3:20 at the Taco Bell Classic and compete for the win.
Field events will not be part of the MileSplit live stream, but MileSplit affiliate SCRunners.com will be providing post-event photo and select video coverage of the field events posted on the meet page and website. 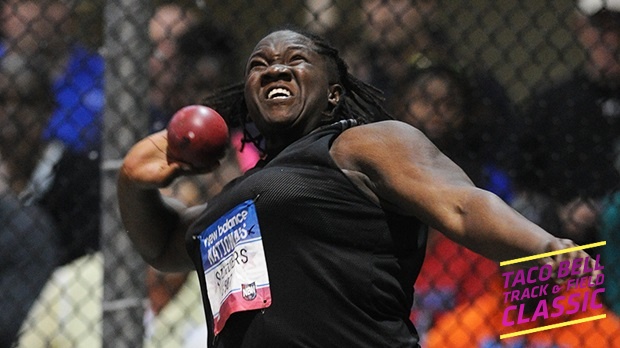 No athlete or event will be more anticipated at the Taco Bell Classic than when Raven Saunders of Burke High School in Charleston, South Carolina steps into the throwing circle for the girls shot put. Saunders shattered the national record indoors in the shot put with a historic throw of 56'7.50", which is a greater distance than the current outdoor record of 54'10.75" (Michelle Carter - Red Oak TX - 2003). It is likely just a matter of when and not if Saunders breaks the outdoor record. Hopefully we will witness a new national record at the Taco Bell Classic from Saunders!
Don't forget to sign up in advance to get access to watch the live stream of the Taco Bell Classic here! We will have start to finish live video coverage of the running events on both Friday and Saturday, while videos can also be viewed archived on demand for MileSplit Insiders uploaded post-event on the Taco Bell Classic meet page at SCRunners.com, a MileSplit affiliate.
Tweets by milesplit