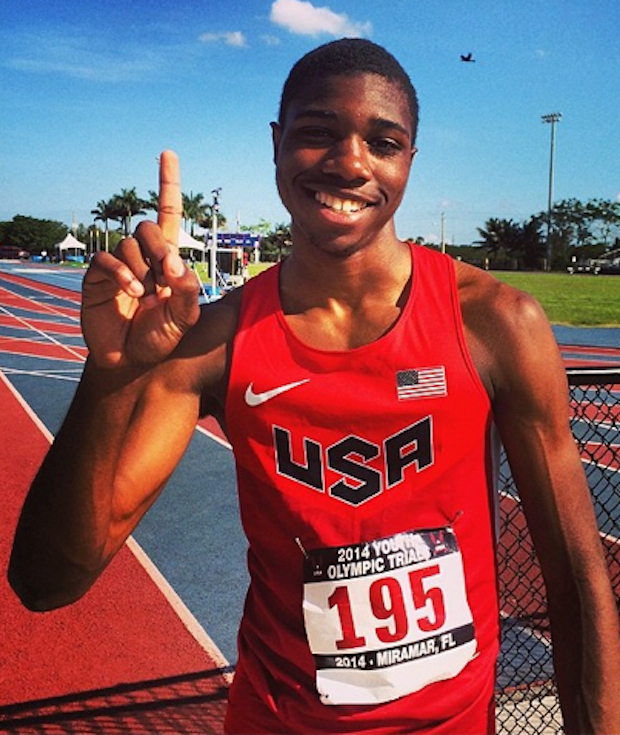 Three US #1's were recorded in the meet including both 1500 meter winners in Grant Fisher of Michigan in 3:51 for the boys and Malia Ellington of North Carolina in 4:36 for the girls. Fisher, the New Balance Nationals Indoor champion in the mile and Foot Locker National champion in cross country, did not have much of a field to work with as there were just two runners from Canada, but the Grand Blanc High School (MI) junior still threw down his second fastest 1500 meter time ever of 3:51.92, which equates to about a 4:08 1600 meter time and 4:10 mile. Last summer, Grant Fisher earned a Team USA singlet for the World Youth Championships and finished 9th in the World finals of the 1500 meter run.

Malia Ellington, a North Carolina state champion in all of the last three seasons (indoor, XC, and 2013 outdoor) had a bit more of a race on her hands in the girls 1500 from Madeline Sumner of Canada and Paige Duca, a junior from Sacred Heart Academy in New York. All three runners went under 4:40 with Ellington having come off a 2:11 800 meter performance at the New Balance Nationals Indoor having the best close to win in a US #1 effort of 4:36.56. Ellington has run 6 seconds faster in the event with a 4:30 lifetime best from last June at the Powerade Games in June. Ellington is looking forward to a potential summer trip to China. "The 1500m felt great.  It was really exciting to run with these girls from different countries.  It was really cool.  The prospect of going to China is really exciting," Ellington shared with the USATF post-race.

Meanwhile, the 200 meter dash finals for boys featured two of the country's brightest young speedsters between sophomores Noah Lyles of T.C. Williams in Virginia and Amir Rasul of Christopher Columbus in Florida. Rasul won the 100 meter dash finals earlier in the meet including a US #5 time of 10.47 in the prelims. Lyles, a Virginia 6A state champion indoors in the 300 meter dash and All-American indoors at the New Balance Nationals in the 200 meter dash, made it known that he wants to earn a second trip to compete internationally. Lyles, last summer made it to the semi-finals of the 200 meter dash at the World Youth Championships in Ukraine. On Saturday at the Ansin Sports Complex in Miramar, Lyles was able to pull away from arguably the next fastest sophomore in the country in Rasul (2nd, 21.12) and take the finals with a new US #1 and wind legal time of 20.89 to dip under 21 seconds for the first time in his young high school track career. Lyles told the USATF: “I was so excited to get out there and run again after the prelim. I was so psyched with my time, to get 20. I just did nationals and I didn’t think I’d be doing that great. My brother and my mom said that I’d do it here. I didn’t believe them. I just ran like I knew I could and it ended up being great.”"

It was a Virginia 200 meter dash sweep with Nansemond River sophomore Brandee Johnson bolting the nation's fourth fastest time in the finals with a wind-aided 23.76. A significant drop in time for Johnson, who had a previous 200 meter PR of 24.36 from last summer's USATF Junior Olympics. Johnson is coming off an indoor season which she won the Virginia 4A sttate indoor title in the 300 meter dash (39.06 PR) and earned All-American honors with a fifth place finish in the finals of the 200 meter dash at the New Balance Nationals Indoor.

Since this selection trials qualifier is geared and catered towards IAAF youth events, several of the hurdles races were set to lower heights and throwing implements were used at lighter weights that will be the same meet standards to be used for the 2014 World Youth Olympic Games in China. Below are those events with variations from the regular high school heights and weights:

Fitzgerald's win at the meet was most impressive with the Thayer Academy (Braintree, MA) sophomore defeating the current US #1 ranked in the 600g javelin throw in Katelyn Gochenour from Nebraska (4th, 155'10"), who seemed to actually throw a shorter distance with the lighter jav from her season best. A victorious Fitzgerald was quoted by the USATF: “There were a lot of athletes here who hadn’t thrown the 500 before.  I knew the technique of throwing the smaller jav.  I knew how it felt to throw with a smaller jav. I’d been throwing in a curtain all winter, I hadn’t really practiced at all."

No asterisk for the following performances though in a US #2 1:51.53 800 run by Myles Marshall from Kingwood High School in Texas, a US #6 clearance of 5'10.50" in the girls high jump by Janae Moffitt of Oak High School in Indiana, or Chinne Okoronkwo from Mountainlake Terrance High School in Washington extending out to a US #2 leap of 41'6.50" in the girls triple jump. Okoronkwo hopes the performance is enough to earn her a spot like the other winners on the Amercias team and experience the Far East. “I wasn’t doing too well and it took until my last jump to get a good jump and I was really happy with that one. I PR’d by over a foot, so that felt really good. I really wanted to try my best to get a mark that would help me make the team and go to China. That would be such an amazing opportunity. I’ve only been out of the country twice, so that would be so cool.”