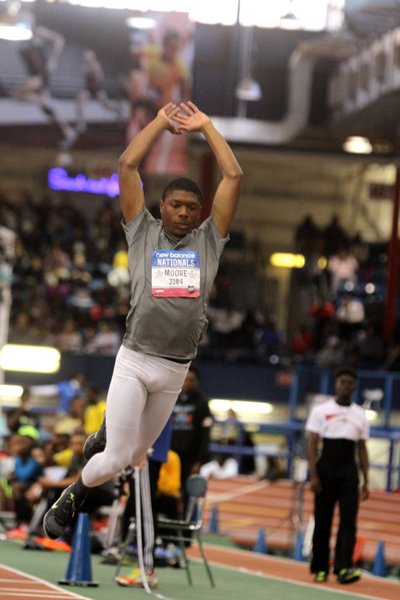 Another gold medal on Sunday has the Fremont, Calif., standout more anxious than ever to compete outdoors.

“I would have thought it was possible,” Moore said of his reaction to any pre-meet predictions of his double win in the horizontal jumps. “It was great competition."

“Today was just my day. I am just happy to come out here and perform well.”

Of the winning jump, which was seven inches longer the rest of the field, Moore knew the key.

“Keeping my second phase together,” he stated of what propelled him to a US#2 leap of 50 feet, 8.75 inches. “A lot of times I seem to be off-balance on my second phase so I focused on that. That was able to pull me forward to that jump.”

His competitors kept the pressure on Moore as he was unable to find the board in the finals but found a little bit of humor in having drawn a red flag on each of his final four trips down the runway.

KeAndre Bates of El Paso was the only other competitor to bounce past 50 feet, hitting US#450-1.75 in the final round.

Moore noted that a minor adjustment outdoors should add even more length to his triple jump marks.

“I still have to move back at least four more steps,” said Moore, who added almost 2 feet to his season best to move almost to the top of the national rankings. “That will bring a lot more speed into my triples. That should really help me a lot. Big things will come.