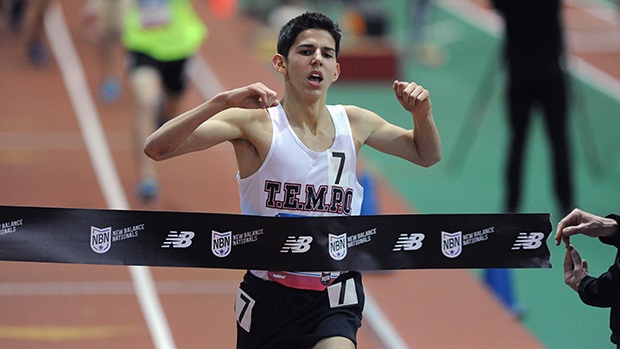 Sunday afternoon, Grant Fisher only needed one huge negative to make a positive, that being a New Balance Nationals Indoor championship in the boys’ mile run.

When a sluggish pace left the final heat at risk of not being able to match the fastest time from earlier in the day, the Michigan standout responded with a massive negative split final half-mile to decimate the field en route to a US#2 time of 4 minutes, 9.46 seconds.

“That’s definitely the fastest I’ve ever closed,” the junior said. “The atmosphere here, and everyone standing and cheering, it gets really loud. I’ve never been in an environment like that.”

The 2013 Foot Locker cross country champion, Fisher was just off the lead on the rail during the early going as Virginia’s Matthew Novak was the leader after a 65.6 opening 440. The pace didn’t improve much at the halfway point as the leader crossed in 2:10, leaving the field only about 2:04 to cover the second half and have a chance at the overall win.

The field hit the accelerator abruptly on the next backstraight as the eventual winner putting himself alongside the leader with 600 meters left. Fisher made his big move 100 meters later.

“I really wanted to push,” Fisher said of the 1:59 closing half-mile and 56.8 final 400. “I didn’t know where everyone was behind me, but I knew there were very strong guys in the field that could close at any time. I was just pushing as hard as I could those last two laps.”

The national leader, Luke Gavigan of Tappan Zee in New York was the runner-up in 4:11.67. Because of the slow opening laps, only Fisher was able to gain a spot in the year’s top 10 list.