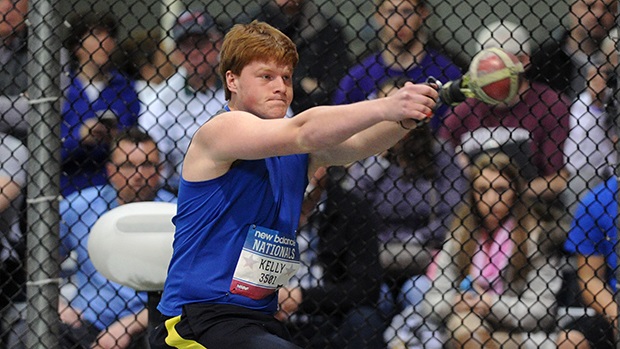 One could excuse Adam Kelly for being a little nervous and in a hurry. After all, national championships were on the line Sunday in New York City.

Despite some anxious moments, the junior from Barrington, R.I., was able to withstand a late challenge and capture the New Balance Nationals Indoor title in the weight throw.

“It’s a problem I’ve had almost the whole season,” Kelly said. “I get a big mark and then I wouldn’t be able to improve just because I would be trying to get a better one and going too fast. Of course, today is one of the most nerve-wracking times as I was watching (my competitors) take throws and try to better my mark.”

The national leader entering action at The Armory, Kelly opened the last of three flights at 72 feet, 7.5 inches before upping the ante considerably. He then upgraded from a throw that would have been worth a fourth-place finish to the eventual winner.

“Obviously, I would have liked to get 80, but it’s even better to win a national championship,” said Kelly, who only started in the event as a freshman.

Georgia’s Daniel Haugh had the year’s second-best effort headed to the Big Apple. He wasn’t able to wrestle the top spot from the Rhode Island thrower, but he did make the final margin very tight as his sixth-round spin resulted in a toss of 77-4.