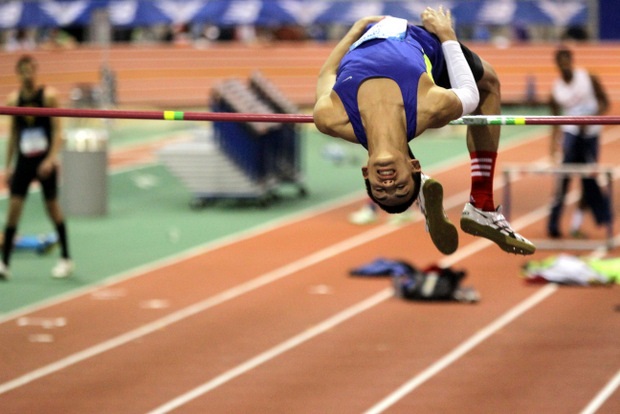 Not much got in the way of Canadian Paul Galas and a New Balance National title in the high jump.

Well, nothing outside of a cleaning lady ready to tidy up The Armory as Saturday’s final event came to a close.

Galas was still perfect on the day when the event title was his. Things got slightly interesting and very strange when one of his approach marks accidentally was swept away by a maintenance worker anxious to get a start on clearing any tape or debris from the infield.

“I’ve never seen that before,” he said of being alarmed when his taped mark was picked up and tossed into a garbage can on wheels as he prepared for his final try at a possible PR of 7 feet, 0.5 inches. “You have to go with it. There’s no excuse, but that was odd.”

“It was good,” Galas said of his winning jump. “It wasn’t much pressure on me. I felt like I was just having fun. That’s what it’s supposed to be.”

Galas’s run at the title was made easier as a third of the field failed to clear the opening height.

“I was very surprised,” Galas, who was seventh in last year’s World Youth Championships, said of the abundance of misses. “Coming in the field looked pretty good. I was surprised, but I can’t complain.”

Of his second run at 7-0.5 this year, Galas was optimistic and even offered a prediction.

“It will come,” the Ontario resident said. “Outdoors, to be safe to say, I think I’ll get it.”

Another Canadian – Leaugen Fray – was third at 6-6.25, while Steven Dunbar of Virginia Beach, Va., was fourth at the same height.