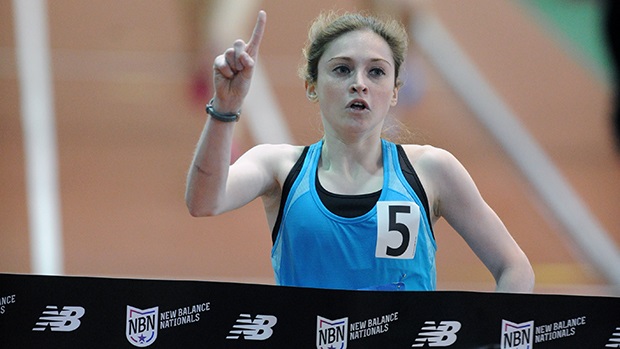 Tessa Barrett is thinking about taking a little break from all the hard training and racing she has been doing lately. Maybe some light runs around the block with her dog, nothing crazy. A little rest before the outdoor-season begins.

She certainly deserves it.

The senior from Abington Heights, Pa., concluded an amazing weekend at the New Balance Nationals on Sunday afternoon by winning her second title inside the famed Armory. Barrett’s latest conquest came in the two-mile run where she utilized a devastating kick the final lap to break away from a tight pack and cruise to a nation best of 10 minutes, 8.05 seconds.

The victory comes less than 48 hours after she broke the one-year-old national record of North Carolina’s Wesley Frazier in the 5K with a sizzling 16:11 clocking. She also matched the double-winning effort of Frazier, who won both events in 2013.

“I am just so blessed,” said Barrett, who captured the Foot Locker cross-country title in December. “All these girls are just phenomenal, phenomenal runners.” 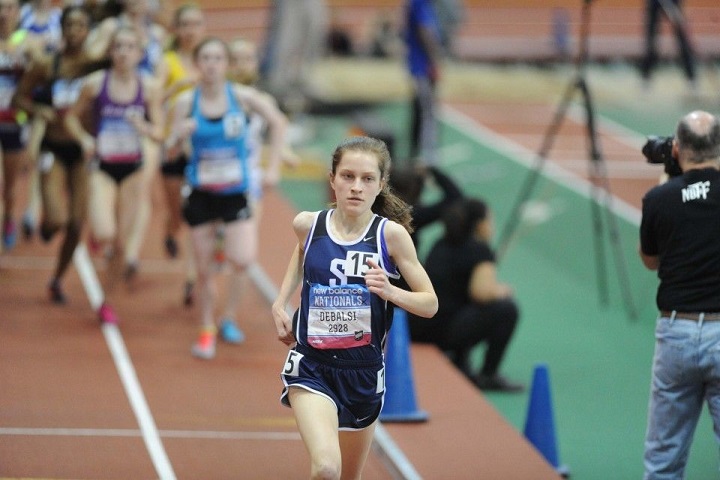 One of those phenomenal runners that was in the field was Connecticut’s Hannah DeBalsi, the sophomore from Staples who battled Barrett until the final few meters of Foot Locker before eventually finishing second.

DeBalsi, who won the New England Championships a few weeks ago with the top-seeded time of 10:12.95, did her customary front-running. She rattled off consistent 38-39 second 200 splits while Barrett and a chase pack that included Michigan’s Audrey Belf of Birmingham-Seaholm, Ohio’s Anne Heffernan of St. Ursula Academy and Millrose Games’ HS mile champion Carolina Alcorta of West Springfield, Va., were a good 10-15 meters.

“I kind of played it by ear in the race,” she said. “I know I was next to Carolina Alcorta so I was very happy about that. I just tried to stick with her and keep a good pace. I saw Hannah charge to the front. I just wanted to stick with whoever is leading. I am a little beat up still from Friday. I felt it a little bit this morning. I guess I wanted to stick right with Hannah.”

DeBalsi hit even splits of 2:33 at the 800 and 5:01 at the mile. Barrett kept DeBalsi within striking distance as she maintained her low five-minute pace and with less than a lap remaining felt the time was right to make her move.

“I knew I would have something left with about a 1,000 (meters) to go,” Barrett said. “I was feeling like I really want to go but my legs were tired. I just (told myself) to save it, save it for my kick at the end. Usually I kick with like two laps to go. I just waited until the very end and I had a good kick.”

“I don’t really remember what happened, I just fell down,” DeBalsi said. ‘I may have stepped on the railing, but I just went down.”

The Staples’ runner looked on the bright side to her misfortunes.

“At first I was really, really mad,” she said. “But I was able to get on the podium, so I can't be really that upset."