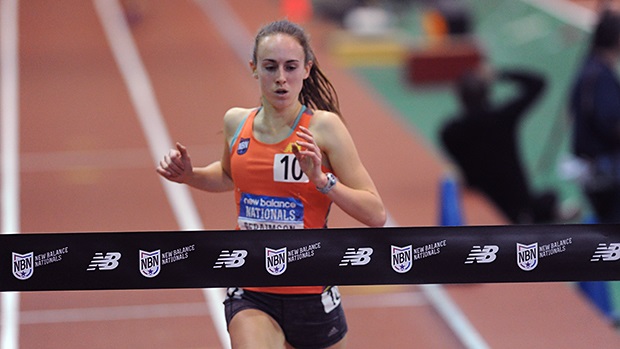 There weren’t too many athletes that got more hype before this weekend’s New Balance Nationals than Alexa Efraimson.

The junior from Camas High, Wash., has been making headlines nationwide ever since she broke Mary Cain’s 3K national record back in late January with a near, sub nine-minute clocking.

Scheduled to compete in the mile run on Sunday, an event she finished sixth at the Millrose Games last month against professional runners, including Cain, many were wondering just how fast Efraimson would circle the eight laps of The Armory. Could she match or better the 4:32 she ran against Cain, the eventual winner of Millrose?

One thing was assured, the meet record of 4:40.62, set last year by Colorado’s Elise Cranny, would certainly be erased.

Efraimson did quite run her targeted goal of a sub-4:35 effort but she did make Cranny 2013 mark short-lived with an impressive victory and new meet-record time of 4:38.46. The real race was for second as Amelia Palladino of University High, W.V., secured that spot with a 12-second personal best of 4:43.84 (US #4). She finished comfortably ahead of Pennsylvania’s Kennedy Weisner of Elk County Catholic, who took third in 4:45.20 (US #5), also a best.

Efraimson was competing at The Armory for the first time since the Millrose Games on Feb. 15. A fast-opening 400 of 63 seconds seem to squelch her plan for a faster performance.

“It might have,” she said. “It affected me later in the race.”

Efraimson, who passed the 800 mark in 2:16, was on cruise control from the beginning. Only sophomore Danae River of Wilbur Cross, Conn., attempted to challenge her in the early stages. River, the New England titlist for the mile, eventually faded to fourth with a strong PB of 4:48.59 (US #7).

Efraimson admitted she was looking forward to a possible head-to-head battle with Cranny. But the senior from Niwot opted to compete in the 800 at NBN, a race she won in a nation-leading time of 2:06.47.

“I would have loved for her to be here,” she said. “I think it would have been super fun. I was a little disappointed but everybody is in different spots for the season.”

Efraimson is unsure what she’ll be doing in the immediate future, but she does have one particular meet circled on her calendar. She’ll be competing with some of the best high-school runners in the country at next month’s Arcadia Invitational in downtown Los Angeles, April 11-12.