It was hardly beginner’s luck, but the Hoover, Ala., shuttle hurdle squad showed it didn’t need a lot of races together to get into sync and strike for gold medals.

In fact, the quartet of sophomore Brittley Humphrey, freshman Caitlyn Little and seniors Errin Perry and Sarah Sanford had not raced as a group before the last of eight heats Saturday in the 4x55-meter event at The Armory. The wait was well worth it as the squad zipped to a national record time of 31.35 seconds.

“We were expecting to do pretty good because we’ve never had a team this talented,” said Humphrey, who led off the race for the winners. “We were practice timing ourselves, but we never actually ran it before so we were pretty excited with the time.”

The Alabama squad had little margin for error as the next two teams came from their heat and also eclipsed the former US record. Virginia’s Western Branch, which had three units in the 29-team field, picked up the runner-up spot in 31.46, while Winslow Township of New Jersey claimed third in 31.87 to erase the old mark of 32.02 set in 1999 by Palm Beach Lakes.

“Last week, every day we made sure our exchanges were right, making sure there were no mistakes,” Perry said.

The victory and national record for Hoover puts a wrap on a title chase for the two seniors that got close with a fifth, fourth and fifth in the past three national meets at The Armory.

“We have been training for No. 1, and we finally got it,” Sanford said. “I just needed to go out there and do what I did. Do what we did earlier, and we had it.”

Although they hadn’t raced together in the event, the Alabama quartet was united on several fronts.

“You just have to work together,” Little said. “We all wanted it.” 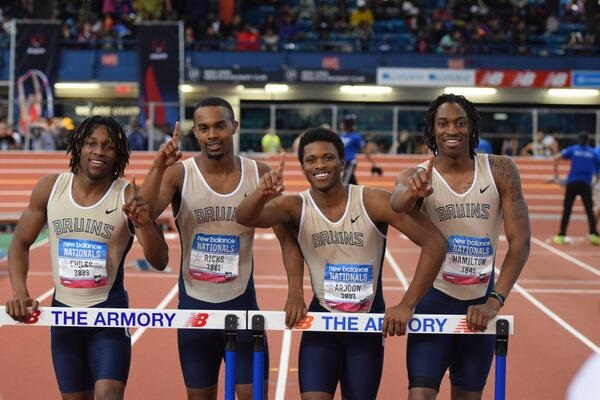 In the boys’ shuttles, it took seven heats for the lead to finally change hands. And it came during a dramatic final heat featuring defending champion and national record holder Union Catholic of New Jersey and Western Branch, which had two boys teams entered.

“As (Stephan Arjoon) was coming down, all I was thinking about was executing and doing what I’ve been practicing,” senior anchor Gregory Chiles said of his final seconds of preparation before he launched into the five flights of hurdles. “Last year, I was on the B team because I wasn’t fast enough.

“So I went back, started training harder and I made it on the A team. Then I was anchor, and I promised my team a victory.”

The promise Chiles made to teammates Rashaun Hamilton, Terrence Ricks and Arjoon was in doubt until the final strides as Union Catholic anchor Taylor McLaughlin began to close on leading Western Branch. A possible photo finish did not develop as the Union Catholic anchor clipped the final hurdle and slammed hard into the track at the finish line.

“You have to get out,” Western Branch leadoff hurdler Ricks said of the key to his squad’s  US#1 29.40 clocking, which was just two-tenths of a second off the national record set at last year’s meet. “That’s the reason why I run first leg.  Also I can sprint real well. That’s what helped us win a national title.”