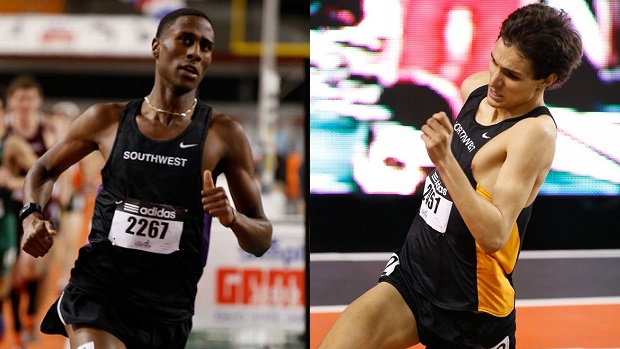 On the final day of the Simplot Games this past Saturday, the country's fastest times were posted respectively in the finals of the 3200 and 1600 meter races by Cerake Geberkidane (Denver East CO) and Ricky Faure (Rocky Springs WY). Geberkidane won the 3200 in a US #1 time of 9:01.13 against the previous top two ranked at the 3200/2mile distance, while Faure dropped his time by 12 seconds from the preliminary round with a swift 4:10.22 victory. Beyond the US #2 all-time clearance of Devin King (Sumner LA) in the pole vault at LSU, the majority of new US #1's came from the distance events this past weekend with a new US leading mile time from Millrose Game winner Luke Gavigan (4:08) of New York (Tappan Zee HS) and the fastest 3K time nationally being produced by Tanner Anderson (8:27) of Washington (North Central HS). (Photo by H. Michael Roberts)

A list of the current US indoor high school boys leaders based on performances currently in the MileSplit database as of February 18th, 2014.