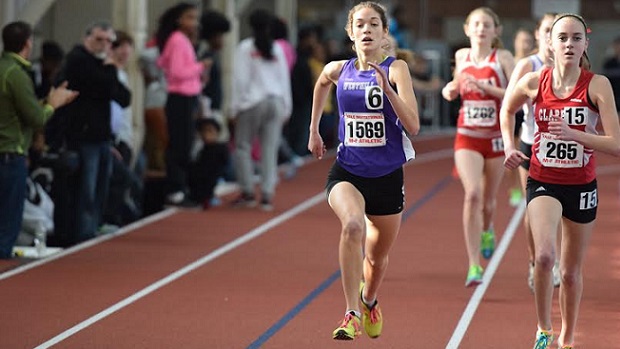 For most of the Championship Girls’ 3K at the Yale Track Classic, Connecticut’s Claire Howlett was perfectly content with nestling herself behind the front-runner. When that pace-setter is Caroline Alcorta, a talented senior from West Springfield in Virginia with a 10:19 best for two miles on her resume, good things will more than likely transpire by the finish.

Patiently holding back for 14 of the 15 laps on the banked 200-meter oval inside Coxe Cage Saturday afternoon, the senior from Westhill, a 40-minute drive from the Yale University facility, made her only initial move the most decisive, breaking away from Alcorta on the back straightaway and holding on for the win with a new nation best of 9 minutes, 43.37 seconds.

“I felt pretty strong,” Howlett said. “My goal was to get a good time. I knew that by staying with (Alcorta) I could get a fast time.”

During the final day of the weekend competition, Alcorta crossed the line in second with a runner-up time of 9:45.59 (US #2). Finishing third was previous event-leader Maddy Berkson of Classical (RI), who broke her own state record by two seconds with a time of 9:47.35 (US#3).

Alcorta, who placed third at the Foot Locker Nationals this past fall, took the pace out hard from the opening gun. She hit the opening 1K in 3:10 and was 5:06 at the mile with Howlett just a stride or two behind.

Berkson was third at that point, a sizable eight-seconds from the lead.

The two leaders maintained their consistent sub-40 second laps before Howlett was able to shift into another gear with about 100-meters remaining.

The boys’ Championship 3,000 proved equally as exciting with Tatnall (DE) junior Stephen Garrett edging Colin Tierney of Bishop Hendricken (RI) with an 8:35.20 clocking. Tierney, a senior, finished second at 8:35.36. Their respective times rank second and third on the national scale.

St. Anthony (NY) senior Patrick Tucker (eighth, 8:42.84) was the early-race leader, passing the first mile around 4:36. Garrett assumed control of the lead with about a half-mile to go. Tierney tried to pass the Delaware runner on the final turn and nearly stole the show the last few meters.

“I think I should have passed him going into the last lap. He had a good surge on the backstretch and then poked around me on the final straightaway,” Tierney said. “I thought I had him but then he cut back from the second lane into the first lane. He kind of gave me a little elbow and just edged me at the line.”

In the boys’ Championship Mile, Westchester Henderson (PA) senior Tony Russell won with a season-best and US #6 of 4:16.26. He held off fast-charging senior Christian Alvardo of Fairfield Prep (CT), who was second with a US #7 of 4:16.27. Jack Salisbury, a sophomore from La Salle Academy (RI), placed third at 4:18.98.

Henderson, owner of 4:14.20 best, never relinquished the lead from the opening gun. He ran consistent splits throughout the eight-lap race. He hit the 800 mark at 2:08.

Northport (NY) senior Brigid Brennan broke the tape in the girls’ Championship Mile with a four-plus second best of 5:04.13. Isabelle Horouch of Cold Spring Harbor (NY) was second at 5:06.05.

Brennan was among a pack of four runners at 1,200 (3:49). She broke for the title with a sizzling kick the final lap.

“With 400 to go I just felt really strong,” Brennan said. “I knew that I had speed so I went into the last lap and knew that I could pull it out.”

One of the country’s best, Downington East (PA) senior J’Von Jennings, maintained his No. 4 ranking in the 55 hurdles with a time of 7.48.

Port Richmond (NY) senior Yazmin Wilson-Jones coasted to a four-second victory in the girls’ Championship 800 with a time of 2:14.44 (US #8).

In the field events, Smithtown West (NY) senior Benjamin Bonhurst, the top-ranked shot-putter across the states, unleashed another 60-plus foot effort inside the circle with a winning heave of 60-3.5 in the Championship event.

West Springfield (VA) senior John Seals was a convincing victor in the Championship High Jump with a leap of 6-8, just two-inches shy of his PB of 6-10 (US #3) set a week ago at the Suffolk Stars Invitational.