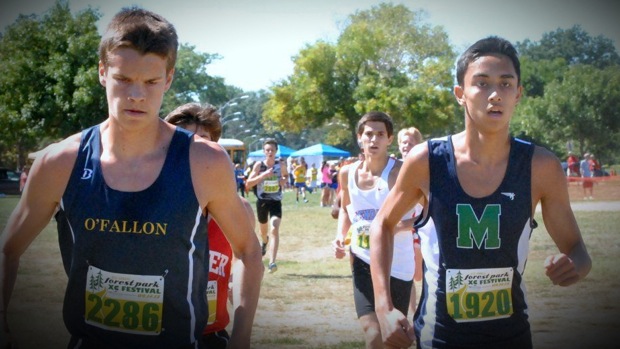 Noah Kauppila (1920) is fit and ready to roll for his senior year of XC! (Photo by Paul Everett)

Noah - Running my race at Forest Park really gave me an idea of where I am at this point in the season. Right now, I am right around where I want to be this early in the season, but I will definitely have things to work on. Training has been going great.  However, since just a couple months ago I was training for an 800, I think it might take me a little longer to come around into top aerobic shape-which is fine since the big meets are at the end of the season anyway. I’m most excited about the post season races-I want to throw everything I have into the NXN and Footlocker Regionals and just see what happens.

MileSplit - After competing at Nike and Foot Locker regionals last year and cracking 9:00 this spring, what are your plans for this season?

Noah - Mainly I just want to improve on my times from the previous year- which hopefully shouldn’t be too hard since I had an awful XC season last year. I want to train really hard and just see what I can do in my final high school season. Making NXN and FL would be nice, but I learned last year that expecting to make those meets doesn’t always end well.

Noah - I joined my summer track team when I was 10 years old and ran the USATF and AAU meets. Once I found out I loved running, my dad decided to round up some of my friends from my soccer team and create an xc team that winter and we made it to the Nationals at Disneyworld-which was one of the most fun experiences in my running career. Ever since then I have run cross country.

Noah - My dad has been most influential. He has invested a lot of his time into my running development and I would be nowhere without him. He has pushed me through the hard times, dealt with my complaints and my laziness, and has been the most supportive person/coach that anyone can have.

Noah - My parents have influenced me the most in my life. Their support and dedication to my pursuits, and their unwillingness to accept mediocrity are really inspiring and have been a huge part of my success.

Noah - Lots of hard work, but the key is to just have fun. Last year I learned the hard way what happens when you lose the enjoyment out of running, so that has been one of my key focuses this season.

Noah - Whether it is the long dreary runs in the hundred degree weather or the sluggish yet hectic early morning practices, you typically bond with the people who share your suffering. So I think our team really bonds when we have those really hard practices, when everybody is giving it their all for the sake of running faster and bettering the team. Also, we try to keep things really light and fun outside of races to make the experience more enjoyable. If we always were super focused and intense, we wouldn’t perform as well as a team.

Noah - My favorite race was 2011 Footlocker Midwest Regional. I had come off an ok season in xc, and I just wanted to run the race with my best friends and teammates and have a lot of fun. I had no plans of placing very high, but at the end I finished 14th.  Part of me was kind of disappointed because if I had planned things out better (and not have started the race near the back of the pack), I possibly could have done better and placed even higher. But overall I was super excited that I was able to run with the best in the Midwest and be the second sophomore to finish (behind Addison DeHaven).

Noah - My favorite competitor would have to be Patrick Perrier. We always seem to find a way to create really epic races against each other, and he has helped push me to become the runner I am today. It is also really nice to have national caliber competition right near your home. I also like competing against Spencer Haik. Just like Patrick, he always finds ways to make races really close and down to the wire, and he has also contributed to my success.

Noah - Every year, our team makes a trip to Kansas for our Rim Rock meet, and it is so fun getting to travel with a bunch of your teammates to another state and such. It usually involves a lot of laughing, joking and just screwing around like a bunch of teenagers. The long bus ride would be so much worse without them!!

Noah - Like I said I just want to do better than I have in previous seasons. The end of the season/post season meets will definitely be the focus of this cross country season, and obviously making NXN and Footlocker would be amazing goals for myself. But other than that, it will just be trying to enjoy and make the most of my last high school xc season.

Noah - I don’t believe in planning that far ahead in terms of running. A lot can happen in the next 5-10 years and I could never predict where I will end up. So I just want to run in college and do the best I can at that level, then go from there.

Noah - Watching Mo Farah double in the 5k and 10k. Seeing him outkick everyone is just one of the coolest things to watch, and it was also amazing that he was able to complete the double. I can only fathom what kind of pressure he had going into those races, and to win the 5k and 10k right after he completed that double in the Olympics is insane.

Noah - I don’t typically run to music, but one time when a teammate put a CD into our stadium speakers and was blasting some Skrillex during our workout, I felt like a real BA and it sounded really cool.

Noah - I really like going out with friends or going to the movies. However if I’m really tired or just had a hard workout or long run, I would rather just chill at home.

Noah - I really like running with my arm sleeves in the winter.