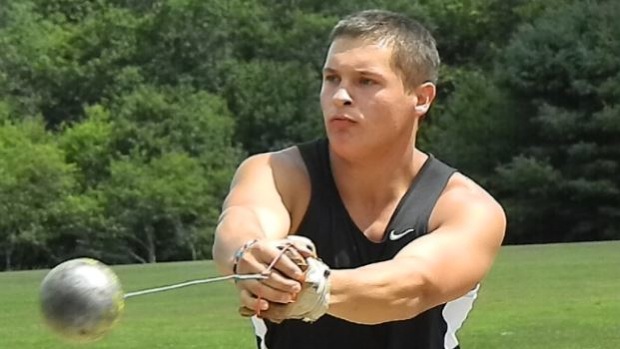 Sometimes what you wish for may require a little more patience than you anticipated. Track and field athletes know all about that.

The multiple national champion from New York had been eyeing the U.S. record in the hammer throw ever since a promising sophomore year at Averill Park High. He came close to the 2008 mark of 260 feet by former Chaminade (Calif.) great Conor McCullough in October of last year when he set an unofficial state record of 258-6 in a small meet.

“It’s something that had been on my mind the last couple of years,” he said. “When I threw that 78-meter throw, I knew it was possible to come early this season.”

It didn’t come quite as early.

After an off-season by his high standards with the 12-pound apparatus, it all came together for Winkler on July 2 at the Army Strong Series in West Point where he unleashed the hammer a U.S. record of 260-5.25. (For good measure, he also knocked off McCullough’s 6K hammer mark, also set in 2008, with a 249-0.5 effort.)

“I have been chasing (the record) all season. It’s been a long, slow season, but it’s been good,” said Winkler, who captured his second individual crown in the hammer at the New Balance National Outdoor Championships last month. “Everything just felt right. There was nice weather, my form felt good and consistent. I put everything together…finally!”

The Cornell-bound strongman was competing this past Sunday at the 21st annual Hammerama in South Kingstown, R.I. It was a meet that Winkler broke a 14-year-old record with a winning toss of 247-10. He might be back to the Ocean State at the beginning of August for another hammer competition, but the biggest meet that’s on his mind this summer will be the Pan American Junior Championships, held Aug. 23-25 in Medellin Columbia.

“I have been to the World Junior Championships and the World Youth Games, but I have never been to the Pan Ams. This is the first time,” he said. “I don’t know what to expect. I am ranked first for the Pan American region right now. There are always kids from Mexico and Cuba that will be there and they don’t have marks yet. Hopefully I’ll see some better kids. There will be good competition no matter what. We’ll see what happens.”

Since the tenth grade, Winkler has been under the tutelage of Patrick McGrath, a 2000 Irish Olympian. McGrath, who had coached the Big Apple’s Alec Faldermeyer to a NBNO crown in 2010, approached the 6-foot-2 Winkler after watching him compete at the nationals that year as a freshman.

“He told me to give him a call and I did, and everything from there has been completely different,” he states. “I have been throwing better ever since.”

Winkler, who has won the last three NBNI titles in the 25-pound weight, was introduced to track and field in the elementary school while competing for a youth track club called the Road Runners. His initial taste with the field events was in the fourth grade with the shot put and discus.

After some success with the two implements, Winkler ventured into the weight events in junior high, throwing the hammer for the first time as an eighth-grader. Utilizing a two-spin approach inside the circle, he made it to the nationals his freshman year of high school.

Just one year later, Winkler was twice a national champion. He captured his first of three straight crowns in the 25-pound weight at the indoor meet in New York City and then copped the hammer in North Carolina three months later.

Winkler earned his initial gold at the NBNO meet on his final attempt with a toss of 214-07.

“Both indoor and outdoor my sophomore year was big because I wasn’t expecting to win,” Winkler said. “My sophomore year I was like, ‘Oh, I’ll just make it to the finals.’ In outdoor, it was just one of those meets. It wasn’t a very good day. I had two fouls (in the preliminaries) and on my last throw I barely made it to the finals. In the finals, I had more fouls and on my last throw I ended up winning it. That was a big meet because I was in a position where I needed to pull out a throw out of nowhere to win.”

Winkler, who now uses a four-spin approach, credits the coaching of McGrath for his rapid improvement with the weight events.

“He can say things very simply and make you understand it very simply,” the star thrower said. “He tries to make the form almost easy to understand rather than a complicated technique, which it really is. But the way he coaches it, it’s simple to understand.”

Leading up to his U.S. record, Winkler had two straight meets where he finally cracked the 250-foot mark. On June 6, he won the Chicagoland Throwers Series by more than 12 feet with a heave of 254-10. Less than a week later, he captured the NBNO title at 251-7.75.

Winkler broke the U.S. mark at the Army Strong Series on the third throw of the preliminaries.

“It was a whole bunch of things,” he said. “Location was a big one. Coach (Megan) Johnson at Cornell really wanted to work with me and she’s a great coach herself, too.  That was big for me. But I also wanted to keep Paddy as my coach. Other schools weren’t completely comfortable with Paddy, but they were willing to do it, but it was more like they wanted to do their own thing with me. She was more willing to work with him personally, which was great. Plus, (Cornell is) close to home so if I need to go see him for the weekend I can just tell her and she will be fine with that. It’s the same distance from my house to him as it is from Cornell to him.”

Winkler, who will major in Informational Science at the Ivy League school, is looking forward to competing at the Division I level and also hitting the books.

“I am going to study hard and get a good education,” he said. “Throwing in college, it’s going to be fun, but it’s not going to be 100-percent focus. I want to get my degree and probably train fairly well after college and try to go to the Olympics. But I will have to see how college goes first.”