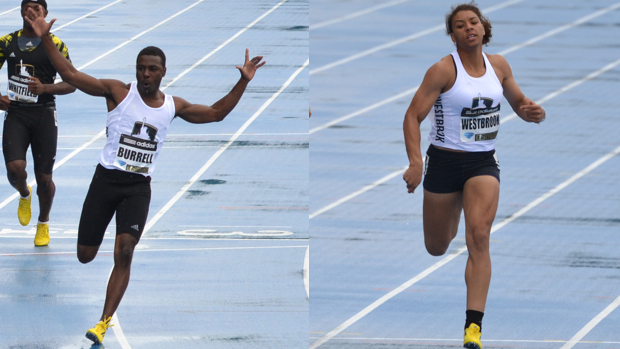 Burrell and Westbrook look to be the fastest, but challengers loom close! (Photos by Kyle Brazeil)

Assuming all the key players make it through to the final this race could be quite fast.  Ky Westbrook, AZ, is certainly the favorite to win with a blazing 11.45 to her name as well as her dominating Dream 100 win earlier in the month in NY.  Javianne Oliver, GA, could be right on her heels with the challenge as she has a best of 11.52 on the season.  Kadecia Baird, NY, is always on her game and has gone 11.63w this season as well as Kate Hall, ME, who has a best of 11.68 this year.

In the boys final the same applies, the best have to get through to the final.  Assuming that happens Trayvon Bromell, FL, and Cameron Burrell, TX, are certainly the odds on favorites.  Bromell has gone silly fast 9.99w this year and Burrell has a best of 10.07w as well as winning the Dream 100 race in NY.  Others to watch in the race include Kendal Williams, FL, Mustaqeem Williams, VA, and Trentavis Friday, NC.

The girls field in the 2 mile run is likely one of the best fields every assembled, especially when Foot Locker finalists don't even make it into the seeded section!!  The fast section better not dawdle because there is quite a bit of talent that will run hard from the first section to try and steal away some All-American spots.  Speaking of the fast section, Wesley Frazier is back in the field with the only sub-10 time in the bunch, a 9:57.70 clocking from late March.  Erin Finn, MI, is also in the race and will be sure to keep the pace honest from the gun.  Both girls however were in the 5k last night so they will have to get their legs back under them to compete well.  Hannah Debalsi, CT, Katie Knight, WA, Bethanie Brown ME, Annie Heffernan, OH, and Sarah DiSanza, NJ, have all run 10:15 or under and are more than capable of striking for the win if they keep in close proximity of the lead.

The boys race could shape up to be a show down between the talented Sean McGorty, VA, and Bernie Montoya, AZ, who have both gone 8:46 and 8:47 and who both have very strong kicks.  If they are on their games the race could be for 3rd place, but anything can happen in the heat of NC!  Chomping at the bit to take advantage of any misstep are Kyle Levermore, NJ, Sam Wharton, OH, and John Lawson, CA, all of whom have gone sub-9 minutes this year.  In addition, there are several boys lurking just above the 9 minute barrier and could make a splash with a great race, including Eric Holt, NY, Nick Elswick, OH, Stephen Shine, NY, Garrett O'Toole, MA, Ryan Udvadia, NY, Mickey Burke, NY, Josiah Hanko, NJ, and John Dressel, WA.

In the girls final it in an all New York affair as Valerie Palermo, Kate Zendell, Keelin Hollowood, Laura Leff, Hannah Cole, Jessica Scheriff and Kelly Hayes all hail from NY and are the cream of the crop in the event as they occupy spots 2-8 on the national rankings!  Look for it to be an exciting race as all these girls are experienced steeplers and should be highly motivated to show they are the best in the nation and their state!

On the boys side there are a few competitors that stand above the rest and they include Brian Cook, NY, Alex Coburn, PA, and Christian Alvarado, CT.  These athletes are ranked in the top-5 in the country in the event, but they will have stiff competition.  Liam Purdy, NY, Ryan Larkin, OH, Gabriel Lara, TX, Harry Winter, IL, and Peter Spinks, NJ, are also all capable of snagging a top spot with a good race.

All the major players are here for this one including the US#1 Marlon Humphrey, AL, with a blazing 13.30w clocking.  Tony Brown, TX, is also in the race with his huge 13.38 clocking.  Wellington Zaza, PA, will have to have a perfect race to overtake these two, but boy will it be tight for the first several medals with hurdling technique likely having to be flawless in order to snag a place.  Allan Frye, GA, and Sydney Scruggs, NJ, could also challenge for a top spot with a solid race.

The girls short hurdle race should be an incredible barn-burner as US#1 Kendell Williams, GA, is in the race with a blazing 13.23 clocking.  Dior Hall, CO, will be in the race as well and boasts a best of 13.60 with Johna' Whitaker, FL, also right there with a best of 13.62.  Other hurdlers capable of finishing high in the race are Ebony Morrison, FL, Chantel Ray, VA, Mollie Williams, NC, and Kayla Coley, PA.

With several top seeds not in the field it looks as if US#2 Maggie Ewen, MN, is the favorite with a huge throw of 175-9 and no one within 15 feet of her.  Battling it out for the other top spots include Lloydricia Cameron, FL, Ashlie Blake, NV, and Haley Teel, TX.

The boys javelin throw competition should be very exciting with a number of athletes in the mix.  Curtis Thompson, NJ, leads the way with his US#1 toss of 214-7 over fellow Garden-stater Christopher Mirabelli, NJ, with a US#2 toss of 214-6.  Justin Carter, AL, and Ethan Shalaway, PA, are also in the mix with throws over 208.  Mitch Obenrader, PA, Luke Smorey, PA, and Tony White, MA are also right around 200 feet and could pop a good one on the right day.

In the girls triple jump Keturah Orji, NJ, and Simone Charley, AL, look to battle it out up top with US#1 42-6.5 and US#3 42-3.5 leaps on the season.  It should be a real treat to see such elite jumpers going head to head!  Battling it out for the other top spots are many other jumpers well over 40', including Anisa Toppin, NY, Iana Amsterdam, NJ, Darrielle McQueen, FL, Keyasia Tibbs, GA, Kayla Richardson, NJ, Tiffany Flynn, GA, and Anasterasia Terrell, GA.

In the boys shot it should be an intense battle up front with Nicholas Ponzio, CA, leading the way with his US#1 toss of 69-7.25 and Braheme Days, NJ, with his US#2 toss of 67-8.25.  Aaron Zedella, OH, Benjamin Bonhurst, NY, Brandan Duncan, IL, will be in the hunt for a top spot if they pop a big one when it matters most.

In the girls pole vault there are many vaulters over 13' but the mantle belongs to Annie Rhodes, TX, with her US#1 leap of 13-11.5.  Kristen Lee, NC, lurks with a 13-5 leap and Sarah Bell, IL, is just back with a best of 13-1.  There are also several vaulters at 13-00 that could challenge with a top spot with big leaps on the big day and they include Madison Heath, LA, Nicole Summersett, TX, and Emma King, MD.

Mighty throwers must come from small states as Rhode Island boasts 4 of the top-6 athletes and one of them has a shot to win the whole thing!  US#1 Rudy Winkler, NY, has thrown 254-9.75 this year but Charles Ionata, RI, has gone US#2 240-5 and these two are clearly the cream of the crop and way too consistent to have an off day on such a big stage.  Battling it out for the other top placings include Colin Minor, NC, Clarence Gallop, RI, Adam Kelly, RI, and Carlos Mangum, RI, who have all thrown over 210 this year.

The girls 4x800m final could be quite intense with the top teams all within 10 seconds of each other.  No doubt the favorites have to be Columbia, NJ (Team FitFast) who won the Penn Relays title in 8:56.37 with a dramatic anchor from Olivia Baker, who know how to win.  Suffern, NY, has gone 9:00.24 and could be right in the hunt as well along with Fort Wayne, IN (Raber TC), 9:01.12, and Warwick Valley, NY, 9:04.20.  Other teams who could finish well with strong team efforts include Barrington, RI, Freehold Twp, NJ, La Salle Academy, RI, and Redondo Union, CA.