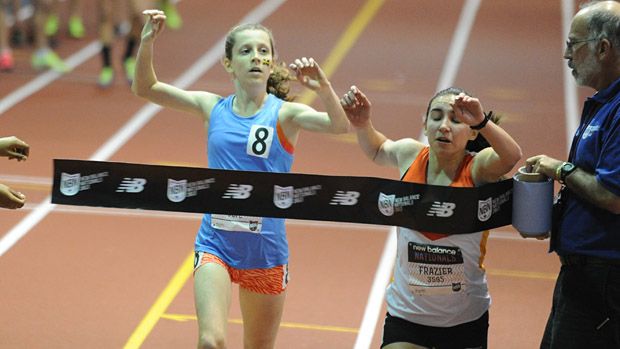 NEW YORK – With the final races concluding during Day I of the New Balance Nationals on Friday, most fans inside the Armory were already out the door and heading home.

It’s too bad because they certainly missed a treat. And what a show it was.

With a blistering kick on the final straightaway, Ravenscroft NC senior Wesley Frazier edged pre-race favorite Erin Finn of West Bloomfield MI at the line to capture the 5,000-meter run with a national record of 16 minutes, 18.01 seconds. Finn finished a mere hundredth of a second behind at 16:18.02.

Both runners dipped under Finn’s national mark of 16:19.69, set at last year’s NBNI. It wasn’t until a few minutes after the race when the official results was flashed on the digital scoreboard.

Frazier was somewhat surprised by the outcome.

Finn, who indicated on her NBNI blog prior to the race that she was unsure if she would be able to defend her title due to a bacterial sinus infection, put forth a gutsy effort in the 25-lap race. She took the race out hard from the start and was at sub 16-minute pace for the first two miles, which she passed in 10:11. Holding a commanding lead over Frazier and the chase pack, Finn appeared to be well on her way to victory.

But Frazier had other ideas. The talented  N.C. runner, who finished second to Finn just a few weeks ago in the two mile at the PR Invitational in Seattle, gradually closed the gap the final mile until she was able to final reel in Finn the last few meters.

Patience appeared to be the best approach.

“I always go out fast in the distance races so I wanted to try and hold a little bit and go at a conservative pace and do 38 (seconds) and 39 (seconds) on my 200s,” Frazier said. “I did that and I was feeling pretty strong. I didn’t think I was going to be able to kick and catch her. She was going so fast. She is such a good runner. It was very hard. I don’t know how I made it.”

Shortly after the race, it was apparent that Finn was running strictly on guts as she was tended to by medical personnel and was unavailable to talk with media.

In the boys’ 5,000, Pocatello ID sophomore Elijah Armstrong won a tight race with a Sophomore Record time of 14:54.27. Max Norris, a senior from Harriton PA, was second at 14:55.41 and junior Esteven De La Rosa of Arcadia CA was third at 14:56.39. Armstrong overtook Norris with just 40 meters remaining.

“I was actually looking for a little lower than sub 15,” Armstrong said. “The way the race went out, I just wanted to break 15 (minutes). I am really proud with the race. It was really competitive.” 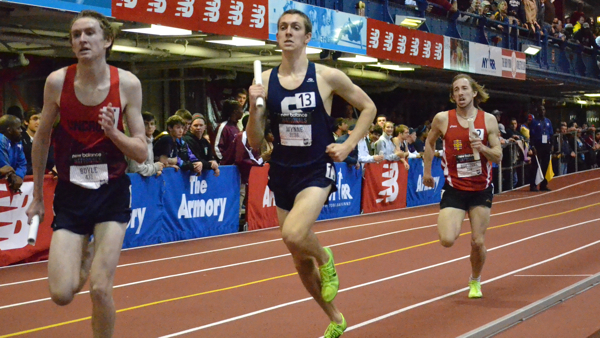 Wynne and Staples chasing CBA on the way to eventual victory. (Photo by Kyle Brazeil)

In the boys’ distance medley relay, most of the focus was on leader Blacksburg VA and whether or not Edward Cheserek could hunt them down. There was little attention on Staples High.

But it was the foursome from Connecticut that came home with their first national title. Fueled by a 4:06 mile leg from senior Henry Wynne, Staples emerged the winner with the nation’s fastest clocking of 10:07.1. Finishing second was Caul-Quebec at 10:09.59. Brothers TC of New Jersey was third (10:10.78), followed by Cheserek and defending champion St. Benedict’s Prep in fourth at 10:12.61.

Wynne, who last week captured the New England title in the 1,000 with a U.S. No. 1 time of 2:25.55, got the baton with his team nestled between seventh and eighth place. He got his squad within contention by the 800 and never let up.

“My coach was thinking maybe 4:08. I ran my 2:25 last week. I had a feeling that if I gave it everything I could come close,” he said. “I knew I had something else in me. Today, I knew there was amazing competition with some guys that have run some great times. I was just going to take everything that I had today.”

St. Benedict’s Prep wasn’t considered the favorite to repeat last year’s magic when it came less than a second from a national mark. But as anyone knows, when you have a runner like Cheserek on your team anything can happen. The senior standout got the baton in 11th place, about 150 meters behind Blacksburg’s Nick Link, who continued to build on his team’s lead created at the beginning.

After a 1:58 for his opening 800 split, Cheserek moved St. Benedict’s into sixth place. The Kenyan-born runner would eventually get his team to second with a few laps remaining, but eventually faded to fourth despite blazing his split in 4:06 and change.

Wynne got a chance to see all the action from behind as he gradually closed the gap in the late stages before unleashing a furious kick the last 100 meters to lead his team to the victory. The other members of Staples also ran strong legs with junior Peter Eklind leading off with a 3:08.06 for the 1,200, junior Jake Scott hitting 51.1 for the 400 and senior Walker Marsh cruising to 1:56.4 for the 800.

Wynne utilized Cheserek as a pace-setter.

“They were a little behind us, which I really wanted,” he said. “I figured if he passed me I could pace off him. It really helped me. I knew that he was the greatest competition I had in the whole race. When he passed me with four laps to go I just stuck with him and the Canadian guy as well. I just knew if I stuck with them, I have a little speed so I could see what I could do.”

Top seed and pre-race favorite Benjamin Cardozo NY came just a half a second from the meet record in the girls’ DMR with the quartet of junior Denise Branch, senior Deejah Stevens, sophomore Sandreka Bancroft and senior Sabrina Southerland combining for a time of 11:39.1 (US #4 All-Time).

The New Jersey squad was in third after the 1,200 leg, despite a strong 3:39 effort from Branch. Stevens put her teammates in the lead for good with a spectacular 54-second 400 leg, making her move to the front by the second lap. Bancroft maintained the position with a 2:17 for her 800 and then Southerland carried it home by cruising to a 4:45 mile.

“We came into the race and we were told to just win it,” Branch said “We were so far off the national record I really thought it was a long shot. I had no idea we would be so close.

Stevens was on a mission once she got the baton for her 400 leg.

“I was just thinking I can catch these girls and I can give my other two teammates a lead,” she said. “I just thought about that. She (Branch) just brought it in to me. It was great.”

Head coach Ray James was confident about his foursome.

“My thoughts weren’t on the record itself, I just wanted to execute and make sure that everybody did what they were training to do, tenacious training to puts in good position,” James said. “Now when we go outdoors, we are going for a little more.”

Sophomore Cyre Virgo of Fleetwood Area PA, captured the high jump in the only other championship field event of the day. Virgo, who captured her first state title just two weeks ago, cleared a personal best of 5-11.25. Senior Kendall Williams of Kell GA, last year’s titlist, was second at 5-9.25.